Never hire a furniture repair service to do the job of an art restorer. That’s not a maxim so much as it is common sense—the exact quality lacking in the latest example of ham-fisted art conservation disasters. This week, news of a 16th-century wooden figure of St. George restored at St. Michael’s Church in Estella, Spain, took over social media for the bizarre conservation techniques applied to it. The work transformed a 500-year-old sculpture in desperate need of cleaning to a sculpture commentators have compared to the French comic character Tintin, Mediterranean Games mascot Tarracus, and even actor Nicolas Cage. St. Tarracus will do.

Probably the most recent visible example of failed conservation occurred in 2012, when a century-old ecce homo fresco of Jesus in Spain was transformed into a viral sensation known as “Monkey Christ”. The restored portrait looked like a monkey. In the case of both Monkey Christ and St. Tarracus, the technique of overpainting thwarted the conservation process.

Overpainting, though, is not a traditional restoration practice, according to all the New York restorers I spoke with. “It’s a NO-NO!” Andrei Givotovsky of Art Restoration NYC emphatically told me over email in all caps. “Conservators work to bring back the ORIGINAL paint.”

Jill Pratzon of Pratzon Art Restoration agreed, and described the restoration mishap as something that can the result of an actual restoration called in-painting. In the case of in-painting a restorer will identify an area that is missing paint due to age or accident and fill in that space with identical paint. Sometimes, though, that process has a hiccup. “What can happen is that a restorer fills in that space, but then continue to paint over a larger and larger area—usually because they’re having trouble matching the color,” she explained over the phone.

Pratzon referred to the “restoration” of the St. George sculpture with air quotes, because the overpainting is so heavy it literally covers the entire sculpture. According Carmen Usúa, the owner of a restoration company that services Estella, the sculpture was rare example of what is referred to as “polychrome” layers of paint, all of which is no longer visible. “It had everything,” she told the New York Times recently. The Association of Conservators and Restorers of Spain (ACRE) weighed in as well, writing in a statement that the restoration displayed a “frightening lack of training”. They also tweeted the following denouncement:

Unfortunately, the kind of well-intentioned efforts that lead to the disasters like St. Tarracus are not uncommon. “50 percent of the work I do is restoring art that someone has overpainted,” Pratzon told me. “But, in all the cases I’ve ever had the paint can be reversed. It’s painstaking work, but necessary.”

Pratzon says she’s worked with heavily overpainted pieces, but notes that without seeing the work in person it’s impossible to speculate on the process. Judy Fox, an artist and restorer told me the same thing when I asked her how long it might take to complete a restoration effort like this. “The slowest and most delicate part of all conservation is removing the overpaint,” she explained. Fox says that conservators use special paint that can be removed easily if the color fades or changes and expressed concern that this kind of paint might not have been used. “The removal of some paints require solvents so strong that they would damage the underlying painting.”

This concern was echoed by Estella mayor Koldo Leoz, who said the experts he consulted with think the detail of the armor and original colors may be lost forever. But perhaps at least some restoration can take place and not all will be lost. “Estella used to be known as a place that took care of its heritage, now we’re famous for the opposite,” Leoz lamented. Assuming the town has the money for a much larger scale restoration, that reputation could be salvaged. 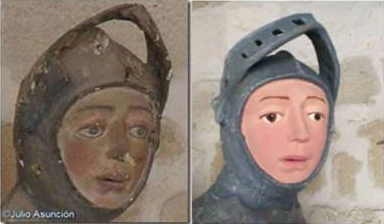