The detaining of an immigrant pizza delivery worker from Ecuador by U.S. Immigration and Customs Enforcement (ICE) while delivering pizza at a military base in Brooklyn last week has reignited the push for driver’s licenses for undocumented immigrants in New York.

On June 1, Pablo Villavicencio, who lives on Long Island with his wife and children—who are American—went to the Fort Hamilton Army Base to deliver pizza, according to El Diario.

He presented his IDNYC card, the municipal identification card that can be used at city agencies like the NYPD, but was asked to provide a state driver’s license, which he did not have. Individuals must present military identification upon entering the military base. If they do not, they must be subjected to a background check. The base said Villavicencio agreed to the background check, at which point officials discovered that he had an active ICE warrant and called ICE. Villacencio said he never agreed to do so.

In February, he applied for a green card, but he is now facing deportation.

In response, Brooklyn Councilman Justin Brannan and Brooklyn Borough President Eric Adams, both of whom represent the military base, held a press conference on Wednesday to seek answers about Villavicencio’s arrest.

ICE is currently in possession of his passport.

“No one should be torn from their family, when all they’re doing is trying to provide for them,” gubernatorial candidate Cynthia Nixon said in a statement. “As New Yorkers, the best thing we can do is fight Donald Trump’s ICE and to protect immigrants from deportation is to provide drivers licenses to all, regardless of immigration status. The governor can do that, and I urged him not to waste any more time.”

The Driver’s License Access and Privacy Act, sponsored by Bronx Assemblyman Marcos Crespo and Bronx Assemblyman Luis Sepulveda, permits the state Department of Motor Vehicles (DMV) to issue standard driver’s licenses and limits what information can be retained and given out on individuals who are applying or holding standard driver’s licenses. The current legislative session ends on June 20.

In 2007, then-Gov. Eliot Spitzer signed an executive order that permitted undocumented immigrants to get their driver’s licenses as long as they were able to provide a foreign passport as a form of identification. But Spitzer eventually dropped the plan amid intense opposition from both Democrats and Republicans.

Spitzer was also sued by counties over the move. County clerks run all DMV offices except for those in Albany, Bronx, Kings, Nassau, New York, Onondaga, Queens, Richmond, Rockland, Suffolk and Westchester counties, which are run by the state DMV.

Cesar Vargas, New York’s first openly undocumented attorney who recently got his green card, told Observer that at military installations, individuals have to either be soldiers in the armed forces or visitors. Visitors have to present valid state identification, such as a state driver’s licenses or a passport.

IDNYC, he explained, can only be used for city agencies.

The Mayor’s Office of Immigrant Affairs (MOIA) told Observer that the IDNYC program continues to seek new ways to expand the card’s acceptance and utility.

MOIA also noted that IDNYC does not authorize cardholders to drive and is not accepted as proof of identity to obtain a driver’s license. It also does not permit cardholders to buy alcohol or tobacco products, get public assistance benefits or travel on an airplane, confer immigration status or provide work authorization.

The mayor also took to Twitter to demand Villavicencio’s release.

Vargas noted that a driver’s license would have prevented Villavicencio from being separated from his family. And he blamed the governor.

“Lack of leadership has consequences, consequences that devastate families… this is where we could have prevented this,” Vargas continued. “Frankly, Cuomo is directly responsible for this family being separated because of the years of inaction from him taking action on driver’s licenses.”

Indeed, he said that there is precedent for governors taking action on driver’s licenses in absence of legislation, referring to Spitzer.

“As chief of the administrative agencies, including the Department of [Motor] Vehicles, he can simply direct the agency to say that Social Security numbers will not be required for a driver’s license,” Vargas added. “You have to present six points and obviously, Social Security is one of the points, and it has to be validated.”

There are currently 150,000 undocumented immigrants in the five boroughs, and undocumented New Yorkers pay $1.1 billion in taxes to the city and state annually, according to an analysis by Comptroller Scott Stringer released in January 2017.

If undocumented immigrants were able to get driver’s licenses, that would generate up to $9.6 million in driver’s license fees for the state, the analysis found. And an extra $1.3 million would go to the Metropolitan Transportation Authority (MTA). It would also lower auto insurance premiums and improve car sales.

The analysis also found that granting licenses to undocumented immigrants would give them the chance to learn the rules of the road, buy insurance policies and interact more openly with law enforcement officials.

It would also make it easier for them to attend more school events, open bank accounts, help foster their children’s educational development and increase their families’ financial stability.

In April, Cuomo told reporters that granting driver’s licenses to undocumented immigrants is a local issue.

“That is a county by county decision, or we would have to change the state law,” he said at the time.

Cuomo officials told Observer that county-run DMVs have opposed granting licenses to undocumented immigrants and that when he was attorney general, he supported Spitzer’s push for the licenses. At the time, Cuomo said he was ready to defend him in court if necessary.

“The Governor has supported providing driver’s license to undocumented immigrants since 2007,” Dani Lever, Cuomo’s press secretary, said in a statement.

On Thursday morning, Cuomo announced that he would provide free legal representation to Villavicencio. He spoke with Villavicencio’s wife, Sandra Chica.

“I confirmed with her that New York State, working with our partners, has secured pro-bono legal counsel to represent Mr. Villavicencio, who is currently held at a federal detention facility in New Jersey,” he said in a statement. “The legal counsel, provided through the first-of-its-kind Liberty Defense Project, has already communicated with Mr. Villavicencio. I also assured her that we would provide counsel and support to her and her family during this time of need.”

Vargas did not rejoice over the news of legal representation for Villavicencio.

“One, too little too late,” he said. “Two, he could have prevented that from [happening] just by the stroke of a pen to issue driver’s licenses… this father would have been with his family and not gone through the legal ordeal of a tormentous immigration legal proceeding.”

This story was updated to include a comment from the governor’s office and the Mayor’s Office of Immigrant Affairs. 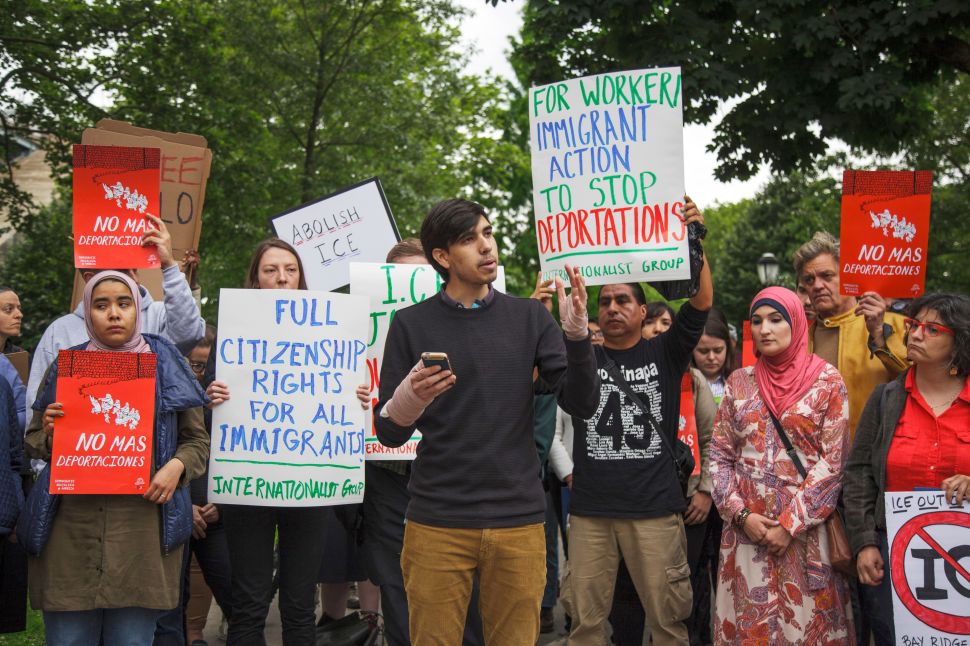