There comes a time in any political candidate’s life when they must, with a desperate attempt of nonchalance, hike up their slacks or suit skirt (modestly, of course) and hoist a leg over a Harley-Davidson. Posing for photos atop a hog or touring a factory where the metal beasts are fabricated has been a rite of passage for decades of U.S. politicians. Perhaps, indeed, the most important rite of them all.

But the company announced on Monday that it would move more of its manufacturing out of the U.S. to avoid tariffs the European Union had imposed on $3.2 billion of American goods. The EU’s tariffs, which came into effect on June 22, are in retaliation to the Trump administration’s recent trade measures, and would make each motorcycle about $2,200 more expensive to import into Europe CNN estimated.

So if the bikes can no longer reliably claim to be “American made,” what do we lose? Oh god so many photos.

Madeline Albright sporting a Harley-Davidson jacket with such style as would make the Pink Ladies proud, nary a brooch in sight; George W. Bush throwing waves like he was roaring away from the crowd, though the bike was completely stationary; Bill Clinton thinking he could pull off leather, and of course being at least somewhat right…this is what fades off into the dusty sunset of American rituals lost. The time-honored tradition of our politicians trying to convince us they’re cool, by doing countless uncool things, while sitting astride a cool thing.

Paul Ryan was the most recent to try to cash in on Harley cred with a visit to their Wisconsin plant in September 2017. Trump had a trip on the books but had to scrap it thanks to the potential size of protest crowds. But one needn’t even travel as far as the Milwaukee headquarters to capitalize on the brand’s connection with American allegiance. Scott Walker just found a Harley dealership and a wooden box to scramble on top of for a small rally in North Hampshire. And Iowa Senator Joni Ernst’s brain wave was an event called the “Roast and Ride,” a 38-mile road trip from a Des Moines Harley-Davidson dealership to the Central Iowa Expo, culminating in a rally around Republican candidates (the roast is for the accompanying BBQ).

In 2011, long after she’d dashed John McCain’s presidential hopes but still during the time when her family seemingly couldn’t stop making tabloid headlines, Sarah Palin took a ride on the back of a hog for D.C.’s Rolling Thunder motorcycle rally (though she wasn’t officially invited) to make a grab at some good press.

And Arnold Schwarzenegger maintained the practice of taking time off from his gubernatorial duties to hit the road for an oh-so-casual-and-not-a-all-strategically-planned ride, with entourage in tow, all throughout his time as California Governor. It came to light in 2006 that these escapades had been unlicensed.

As a display of how much Harley-Davidson has come to be synonymous with the American culture, both in our country and overseas, Ronald Reagan even chose the workers of the company to be the audience for a 1987 address he gave on the importance of trade negotiation.

Though they do already conduct some overseas manufacturing, most of Harley’s motorcycles are currently made in their U.S. factories. Those are located in Wisconsin and Pennsylvania, while a plant in Kansas City, Missouri, is currently in the process of closing. This came after the company reported declining sales in the four years prior. Layoffs from the closing will affect 800 workers, and are scheduled to start in August. There’s no word from Harley-Davidson on whether their recent announcement would impact jobs, but given the fact that the company had already reported decreased sales, if more of its manufacturing were to shift overseas, it seems unlikely further layoffs wouldn’t also follow.

The photo ops—however joyous to behold—may be hokey, but what they stand for is not. They represent not just the jobs we need to keep on our shores, but also our feeling of ownership over quintessentially American products. Our cultural estimation of motorcycle culture may oscillate between regarding it as height of cool and the most embarrassing display one’s elders can take part in. But it’s ours. As this trade war roars to a boil, Harley-Davidson’s announcement has shown what’s really on the line, other than a hearty and much-needed laugh. 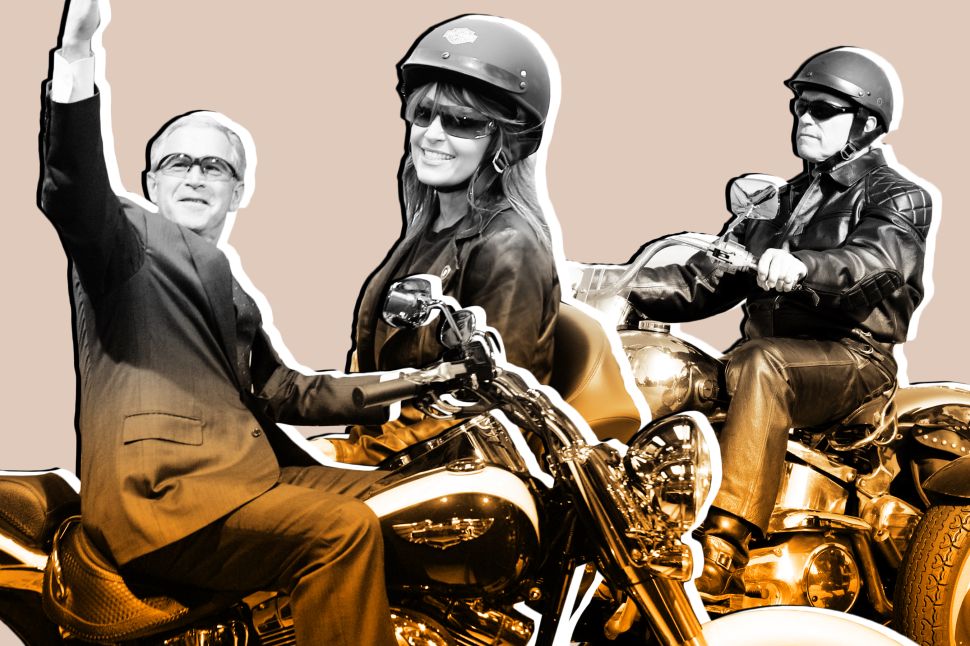