Hurricane Sandy was the most devastating storm ever to hit New York, causing an estimated $32 billion in economic losses for the state and $19 billion in the city. And, as we know, storms of that magnitude have not stopped coming, and are only expected to worsen. Now, Lower Manhattan could be the first to test out an innovative system that is being proposed as a way to protect cities from rising sea levels and future storms. Called “Humanhattan 2050,” a visionary idea from Bjarke Ingels Group (BIG) that’s on view in the 2018 Venice Architecture Biennale, the project not only proposes new infrastructure to safeguard the waterfront for the next hundred years, it will also make these spaces more accessible and enjoyable. It will hopefully serve as the first in a long line of projects that will not only protect our cities, but integrate those protection systems in a way that improves social use of public space.

Initially conceived as a proposal for the Hurricane Sandy Rebuilding Task Force’s design competition Rebuild by Design, BIG’s project emerged as one of the six winners—including Interboro Partners and Office for Metropolitan Architecture (OMA)—that were granted funding. In this iteration, the project was named “The BIG U,” and consists of a protective system that elevates and activates the low-lying coastline from Manhattan’s East 42nd Street, south to the Battery and up to West 57th Street.

Undertaken with the City of New York, the $335 million project—still in its developmental stages—is imagined as 10 continuous miles of protection that’s tailored to respond to the typology of individual neighborhoods and those communities’ preferred amenities. Berms—raised land forms created to separate low-lying areas from adjacent bodies, that here come in the form of rolling hills and banks of benches—provide protection from storm surges and floodwaters, while deployable walls underneath the FDR Drive flip down to create a flood barrier and an open structure for seasonal markets.

The “Humanhattan 2050” exhibit for the Venice Architecture Biennale is a vision that expands upon BIG’s winning idea by enlarging the boundaries of Lower Manhattan with a building development created on an extension of land it cleverly calls MOMA, which is short for MOre MAnhattan. According to BIG, which has offices in Copenhagen, New York and London, the speculative plan addresses climate change and future growth, with exactly the right amount of private real estate development to finance the public projects needed to protect the surrounding area.

This is perhaps one of the best projects that embodies the Biennale’s theme of “freespace.” Curated by architects Yvonne Farrell and Shelley McNamara, co-directors of the Dublin-based Grafton Architects, the theme was open to a wide array of interpretations, but this particularly seemed to capture one of the main points of the curators’ manifesto: “Freespace describes a generosity of spirit and a sense of humanity at the core of architecture’s agenda, focusing on the quality of space itself.”

Occupying a complete gallery of the Central Pavilion in the Giardini, the project’s exhibition offers a U-shaped architectural model of the waterfronts of Lower Manhattan displayed on tabletops and more than 30 monitors mounted on the encircling walls that show related project plans, data visualizations and video footage of the devastation from Hurricane Sandy and excerpts from community meetings about the planned usage of the revitalized areas. The screens of the monitors are digitally “flooded” every three minutes to simulate the immediacy and suddenness of natural disasters.

The buildings in the projected new development area of the model are color coded for their local resiliency support systems, with the yellow structures supplying solar power, the green ones adding vegetation and the blue buildings furnishing storm- retention aids. The snaking protection line is indicated in red. The planning principle for this intervention is to scale down towards the waterfront while connecting the various neighborhoods.

“We built a model of Lower Manhattan, but we only built the parts that are threatened by flooding in the next hundred years,” Ingels declares in a video on one of the screens. “We came up with this idea of social infrastructure, which will keep the city dry when the next big storm comes, while working with the local communities so that it actually comes with positive social and environmental side effects.”

“Humanhattan 2050,” which Ingels ironically dubs “The Dry Line,” is related to many of BIG’s other environmentally friendly projects, both built and under construction. BIG’s tetrahedral apartment building at the end of West 57th Street is organized around a courtyard that has the same proportions as Central Park, while the firm’s 65-storey office tower for Hudson Yards will have a band of planted terraces spiraling around the glass skyscraper to extend the green space of The High Line below. 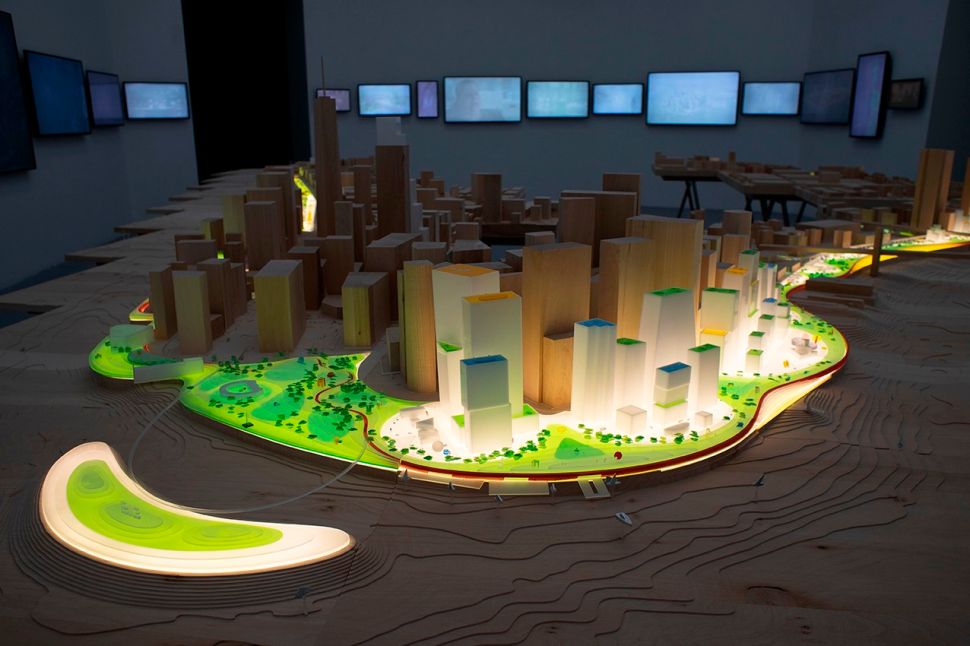