One of the facts of life in today’s America, and in most other even somewhat developed countries, is that people of all ages are addicted to their smartphones. Nearly everyone except the very young and very old spend a high percentage of their waking moments looking into a screen. While there’s no doubt that smartphones have made our lives much more connected and interesting, there’s a considerable downside too. And I don’t just mean the rising casualty count among those too distracted by technology to notice oncoming vehicles.

Neither do I mean the fact, only recently noticed by millions of Americans, that your smartphone is a device to spy on you, the user, in exchange for which you get calling, texting, and access to the Internet wherever you go. If you’re unwise enough to use Facebook—and, let’s face it, you probably are, since more than 200 million Americans do—all that data, generated by you and about you and your every waking moment, is being collected and sold for handsome profits, none of which go to you.

The worst threat posed by smartphones, however, is the easy access they give to bad guys who want to spy on you for reasons more nefarious than mere rent-seeking. Although this threat doesn’t apply to most Americans, it applies acutely to our elites. If you’re a VIP, especially in politics, you are inherently of interest to dozens of intelligence services worldwide, most of which have a presence, under diplomatic cover, in New York and Washington, D.C., at a minimum.

This is the context in which today’s bombshell report in The Washington Post about the discovery of covert spying on smartphones in our nation’s capital should be viewed. Based on a report issued last year by the Department of Homeland Security, the Post story reveals that DHS found a plethora of secret devices in downtown Washington, near the White House and other sensitive federal government facilities, that were designed to intercept calls and texts from cell phones. Known as “IMSI catchers” in the spy business (from International Mobile Subscriber Identity, the usually 15-digit number assigned to every cell phone on earth), these are commonly used by intelligence agencies worldwide to track and intercept mobile communications. As the Post explains:

IMSI catchers are widely used by local, state and federal police, as well as foreign intelligence agencies.The devices work by simulating cell towers to trick nearby phones into connecting, allowing the IMSI catchers to collect calls, texts and data streams. Unlike some other forms of cellphone interception, IMSI catchers must be near targeted devices to work. When they are in range, IMSI catchers also can deliver malicious software to targeted devices for the purpose of stealing information stored on them or conducting longer-term monitoring of communications.

It’s highly unlikely that cops are responsible for planting secret, masked IMSI catchers around the White House, so this is the work of a hostile foreign intelligence service, possibly several. The Russians and Chinese top that suspect list, and we know a good deal about the many ways that Moscow collected signals intelligence covertly inside the United States during the Cold War. As revealed by KGB archives, Soviet embassies were used as covert SIGINT collection sites: this highly classified operation was termed POCHIN at their Washington embassy, while at their New York mission to the United Nations it went by the cover name PROBA. Soviet diplomatic missions became, in effect, huge antennas to collect communications. These operations, among the most sensitive in the entire KGB, brought in thousands of top-secret intelligence reports annually back in the 1970s. In 1977 alone, POCHIN intercepts produced over 10,500 pages of top-secret intelligence reports, including transcripts of the vice president and secretary of State, among many other top U.S. government officials whose phone calls were picked up by the KGB in our nation’s capital.

The Kremlin’s espionage capabilities have only improved over time, and Russian spies are as aggressive as ever. Moscow’s impressively sized embassy, located on a hill overlooking downtown Washington—an ideal SIGINT collection site—is nevertheless too far away from the White House to reliably pick up cell phone calls from the Oval Office. That’s where you need special boxes, often made to look like actual cellphone gear, close to your target. Anything they catch will be relayed back to the embassy—just three miles away, straight up Wisconsin Avenue—for analysis.

And what targets they have! White House staffers use smartphones just like everyone else, and President Donald Trump is reportedly addicted to his. Trump has brought his reliance on his smartphone with him to the Oval Office, and although the Pentagon developed a more secure version for him to use, he isn’t using it. Ever since his inauguration, Trump reportedly has relied on his regular old personal Android phone to discuss matters of state with friends, cronies and even foreign leaders.

This problem has gotten worse, not better, in the almost 18 months Trump has been in office. Eschewing secure communications, which are on hand for him 24/7, the commander-in-chief is using his personal smartphone more frequently than ever, according to a recent CNN report. While this apparently is an effort by Trump to avoid the watchful eye of White House Chief of Staff John Kelly, who represents the last remnant of “adult supervision” in the Oval Office, what it really constitutes is a massive gift to any foreign spies who are listening in.

This is to say nothing ofTrump’s regular late-night chats with his friend and confidant Sean Hannity, the Fox News talking head and right-wing rabble-rouser who is himself a subject of counterintelligence interest in Washington. Several nights a week, after Hannity’s popular Fox News show concludes at 10 p.m., Trump and Hannity discuss, well, everything, according to recent reports. This is a chance for the increasingly isolated president, beleaguered by multiple investigations of his secret ties to the Kremlin, to vent to a friendly ear. In other words, Trump shares his innermost feelings about life and policy with Hannity on an almost daily basis—and likely on a completely insecure phone line. Whoever placed those IMSI catchers knows all about this, and probably much else.

There’s no need to feign outrage here. The Russians—and the Chinese, and God-only-knows how many other foreign spy services—are merely doing what intelligence agencies everywhere do. We do the same. As revealed by the IT geek-turned-thief-turned-defector Edward Snowden, NSA runs a global covert top-secret-plus SIGINT interception program that goes by the cover name STATEROOM. Formally termed the Special Collection Service—though you will look in vain for any SCS listed in any unclassified U.S. government phonebook—as of 2010, this super secret entity was running more than 80 covert intercept sites located inside U.S. diplomatic missions worldwide.

Everybody spies. Wise leaders know this and act accordingly. No sensible head of state anywhere conducts diplomacy on a private, unencrypted smartphone, neither do they share their innermost thoughts with friends on open phone lines. If Sean Hannity is that important a presidential advisor, even if unofficially, the Pentagon would be happy to provide him with a more secure device for his frequent bedtime chats with the president. But that would require the president to act sensibly about his communications first—and that shows no signs of happening. Foreign spies everywhere will keep rejoicing in the meantime. 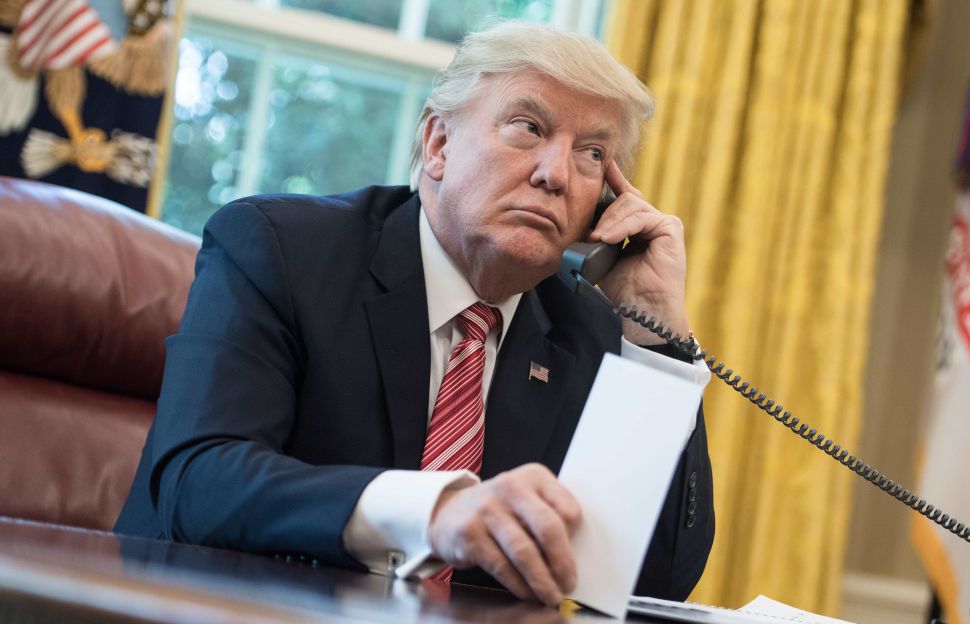