As a right-leaning person, I don’t blame conservatives for cheering reports that the Supreme Court ruled 7-2 in favor (sort of, as I’ll address) of Masterpiece Cakeshop. I thought the decision could have gone 5-4 in either direction, so a ruling this decisive surprised me.

When the Supreme Court accepted the case, many on both the Left and the Right thought it could lead to a decision about the First Amendment and religious freedom. The final decision, however, advanced neither. As law professor Eugene Volokh pointed out, important questions that could have been answered were not, meaning the Supreme Court punted on the most important issues that the case raised.

After the case, we still don’t, according to Volokh, know if bakers can refuse to bake cakes for same-sex weddings on First Amendment grounds even in states with laws banning discrimination against LGBT individuals. It’s also inconclusive if these same bakers can object to baking cakes with images—such as rainbow pride flags—of which they disapprove. And even if we knew the answers to these questions, we wouldn’t know if they extend to other wedding vendors, such as photographers, videographers, calligraphers and graphic designers.

So what did the case decide? Well, we know that, as the Federalist’s Robert Tracinski put it, “The government cannot crush your freedom unless they’re really nice about it.”

The decision came down to whether the Colorado Civil Rights Commission discriminated against the baker because of his religious affiliations, and did so heinously. One member of the commission, which was determining whether the baker violated the couple’s civil rights, compared the baker’s religious views to slavery and the Holocaust.

Had this particular member not said such nasty things, perhaps the Supreme Court would have ruled differently.

I thought for months that since Justice Anthony Kennedy is likely retiring soon, he would avoid the issue of the First Amendment and essentially ask whether there is more harm in the baker making a cake for whomever demands or in the couple finding another baker to design their cake. I didn’t think Kennedy would want this legacy to end on such a broad First Amendment issue.

But this decision is worse than a punt; it’s dangerous. Justice Elena Kagan sided with the Republican-appointed justices, but she wrote a concurrence with fellow Democrat-appointed Justice Stephen Breyer that could be used as a blueprint for state anti-discrimination laws.

The majority decision basically says you can discriminate against people due to their religious beliefs as long as you’re nice about it, but Kagan points out wording in Colorado state law that she believes would have forced the baker to make the wedding cake for the couple without resorting to religious hostility. She cites the Colorado Anti-Discrimination Act, which specifically makes it unlawful for businesses such as Masterpiece to deny “the full and equal enjoyment” of goods and services to protected individuals, such as same-sex couples.

She further states that Colorado law, according to the Court, “can protect gay persons, just as it can protect other classes of individuals, in acquiring whatever products and services they choose on the same terms and conditions as are offered to other members of the public.”

Kagan essentially gave states the language they need to get around the Supreme Court’s ruling and described what ultimately led the court to—sort of—side with Masterpiece in this case. I wouldn’t be surprised if blue states began writing such bills, but the concurrence could also give red states their own blueprint for how to carve out religious liberty exemptions. 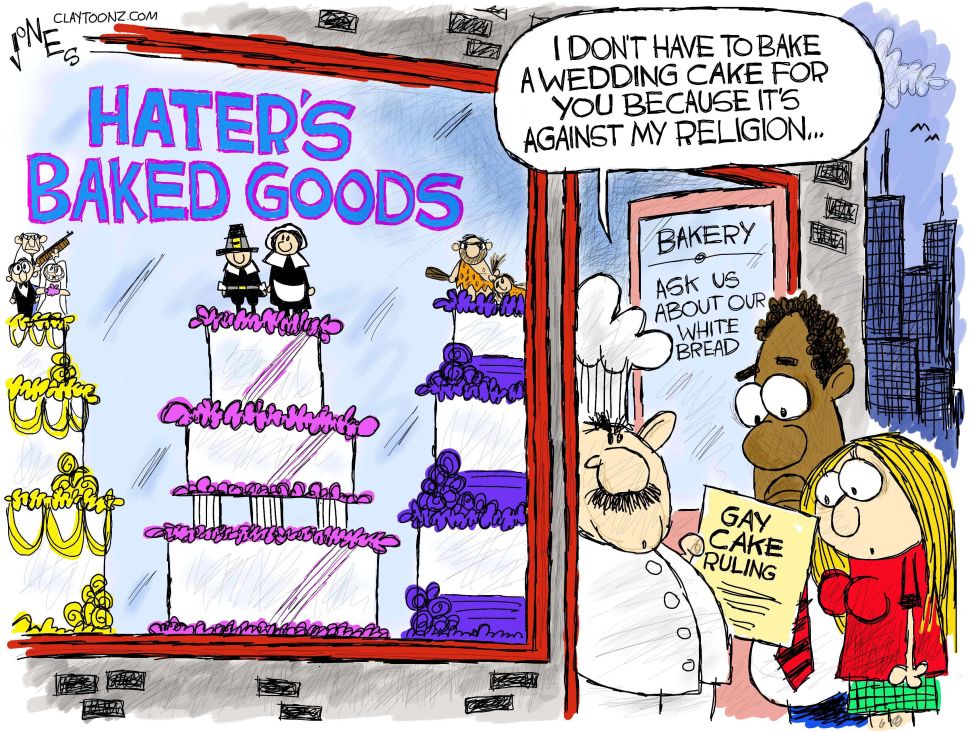