According to Pliny, the Athenian sculptor Lysippos made around 1,500 works during his career, all of them in bronze. Though many marble Roman copies of his work exist, there is only one surviving work thought to be original: the so-called Victorious Youth, displayed in the J. Paul Getty Museum in California, and so beloved there that it has come to be known as the Getty Bronze.

But Italy maintains that this unique statue was very likely looted and acquired inappropriately by the Getty. The country officially requested its return in 1989, a little over a decade after the museum purchased the work.

On June 8, Italian magistrate Giacomo Gasparini published a decision about the Getty Bronze, which was first reported in English by ARCA, the Association for Research into Crimes against Art. Gasparini upheld the country’s order that the work be returned.

The museum acquired Victorious Youth in 1977 for $3.95 million. Discovered in 1964 by fishermen off the coast of Italy, the Getty claims there is no evidence that the statue was looted from Italy, contesting the allegations of the Italian Advocate General and the Ministry of Culture. Italy brought the argument to trial, requesting the repatriation of the statue on the grounds that it illegally left Italy, where it had been discovered.

This case was far less cut-and-dried than other Getty-related art looting scandals, of which there have unfortunately been many, and they have been much-publicized, as evident in a Guardian newspaper headline: “Getty museum admits 350 more treasures may be looted” (and that was back in 2006, before other allegations came to light).

In this case, the Getty consistently argued that Italy should have no claim to this statue, which was made by an Athenian and supposedly found in international waters in 1964, having survived thanks to the “good fortune” of having been sunken in a shipwreck. Most of the bronzes of the ancient world that were on land were melted down and reused, so those that were lost in shipwrecks were more likely to be preserved (as I outline in The Museum of Lost Art).

The question of who owns such an object is complex, but Italy argues that the statue, which was brought to shore at the coastal town of Fano, was subsequently illegally exported from Italy. The story goes that the fishermen aboard a boat called the Ferruccio Feri smuggled the statue into town to avoid having to declare it to Italian customs. As ARCA describes, they then “hid it from authorities, first by burying it in a cabbage patch and later by hiding it in a priest’s bathtub.”

Italian attorneys made the case that J. Paul Getty himself had refused at first to buy the work, and did so because he knew it was an illegal offering. But Getty attorneys said that this was not the reason, rather, at the time it was first offered to him, Getty was rather distracted because his 16-year-old grandson, John Paul Getty III, was missing, having been kidnapped while in Rome in 1973 (an incident that was the subject of last year’s Mark Wahlberg vehicle All the Money in the World).

The legal path leading to this decision is labyrinthine, to say the least, with multiple courts at multiple levels, dating back nearly ten years, ruling that the statue was illegally exported. The Getty has appealed each time, with the case bouncing up to ever higher courts.

This ruling represents the conclusion of this case at its current judicial level. The judge rejected the Getty’s opposition to Italy’s proposed confiscation of the statue. That means that, legally, Italy has the right to confiscate the statue and bring it back “home.” Exactly when it will be seized is now the question, or perhaps Italy and the Getty will reach some agreement, as has been the case in some past instances in which objects have been identified as having been illegally excavated or exported from Italy.

The Getty released a statement saying that it is “reviewing the decision,” which the museum found “disappointing.” They reiterated the argument that the statue was found in “international waters” and in 1964, which is a key date—it is prior to the 1970 UNESCO Convention, which greatly tightened international laws on the legal excavation and export of cultural heritage.

The larger problem is that the Getty has a record of acquiring illegal pieces, as has been covered at length in all manner of newspapers and in books like Chasing Aphrodite, The Lost Chalice and I Predatori dell’arte Perduta. Getty curators have been accused in Italian courts of having knowingly purchased looted antiquities, and internal memos have come to light suggesting that the Getty administration was aware that objects they wished to acquire were problematic, but that they acquired them anyway. In 2006, for instance, the Getty agreed to return 26 objects to Italy, 25 of which were claimed by the Italian Ministry of Culture after careful detective work by the office of the Advocate General, including one of its lead investigators, archeologist Stefano Alessandrini.

The Getty has repeatedly been found to have acquired illegal objects, repeatedly has defended itself and repeatedly has been obliged to return objects. This unique Lysippos statue is just the latest in a long and well-documented line of unfortunate issues at one of the world’s richest museums. 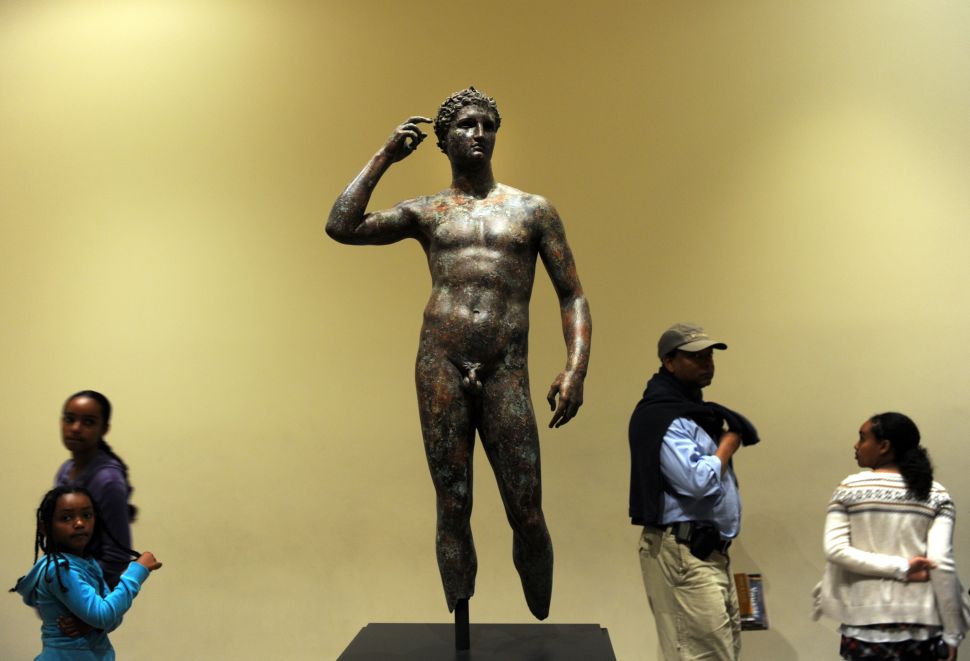