It is not terribly surprising that they made a movie about grown men playing the same aggressive and destructive game of tag for over 20 years. It is an idea that carries the pungent stink of inevitability.

It does, however, register as somewhat of a shock that even after assembling a team of notably talented and funny players, that the makers of Tag were able to wring so little genuine humor out of the concept. By clumsily melding heartwarming sentiment about the importance of playing games as adults with the take-no-prisoners R-rated shenanigans of the Hangover movies, Tag winds up not knowing what game it is trying to play.

In the film, men of means place extending their boyhood bonding rituals above the needs of all others and, in the process, do thousands of dollars of property damage that they never pause to consider, much less pay anyone back for. In doing so, rather than sending up or saying something useful or funny about male privilege, Tag becomes just another toxic and clueless example of it.

It is inspired by a true story of men who played the game every February into adulthood, and you catch a glimpse of the real players having genuine fun in footage that plays behind the closing credits and makes you wish the movie you had seen had been a documentary. Their tale was first told in a Wall Street Journal article, a fact the screenwriters found so fascinating that they included it as a plot point in the movie. (A reporter from the Journal, played by Peaky Blinders’ Annabelle Wallis, joins them for the hijinks as a largely mute witness who seems more like a captive.)

The plot hook here is that one of the players, a smirking fitness professional named Jerry who is played by Jeremy Renner, has never been tagged. Jerry engages in various Jason Bourne-like maneuvers to keep the others—Ed Helms, Jake Johnson, Jon Hamm and Hannibal Buress—from tagging him “it.” With Jerry planning to retire from the game after getting married, the question becomes whether the “boys,” as they are called throughout, will wreck his wedding by ending his streak while he is enjoying his nuptials. It is never explained why the potential wedding damage matters so much and, say, the stained glass window Jerry destroys while trying to escape a church doesn’t register a bit.

Towards the end, Tag attempts to add gravitas to all of this pointless destruction by having one of the “boys” reveal a very adult and potentially fatal illness. It’s while they are in the hospital that you realize how deeply uninvested you are in these characters. Of the ensemble, it’s only Buress—playing someone who is so stuck in his own head that he doesn’t realize what kind of movie he’s in—who really registers any laughs.

It is also during the hospital scenes that the saccharine speechifying about the importance of keeping childhood alive reaches its pinnacle. By going to such extraordinary lengths to not become “it,” Jerry learns that he may have fundamentally misunderstood the point of playing tag. Unfortunately, it’s not Jerry who needs this advice, but the team that conceived of and executed this misfire. 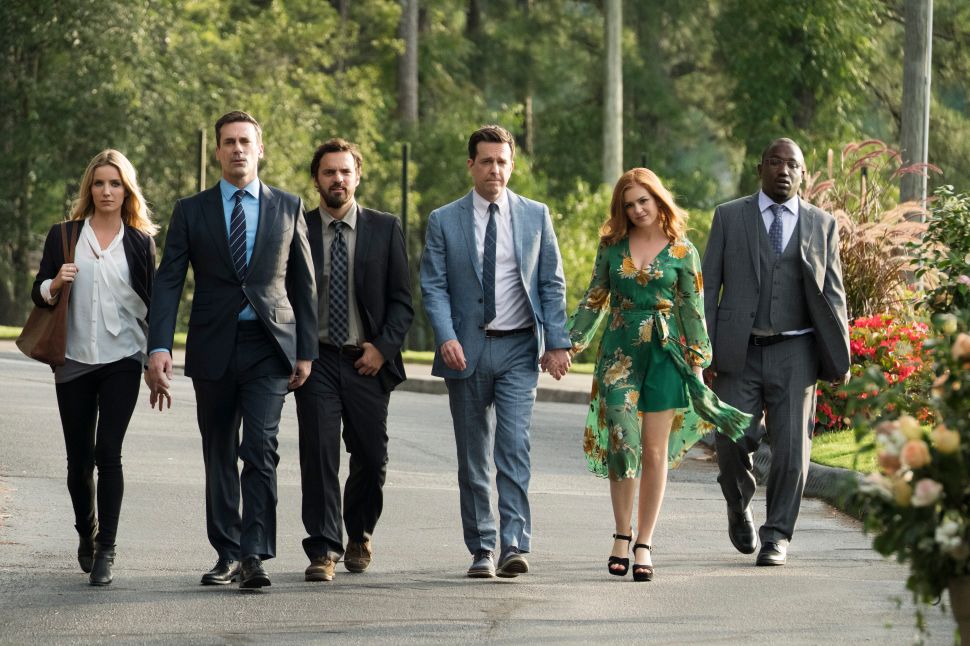