Yesterday, as President Donald Trump walked across the Capitol for a meeting with Republican lawmakers, a young woman cursed at him. “Mr. President, fuck you!” she yelled. The insult was captured on a video.

Yelling fuck you to the president isn’t exactly novel; it happens a million times a day online. But there was something different about this one, not only because it reportedly came from a congressional intern, but because it was said directly to him. It’s unclear if the president heard the insult, and even if he did, whether the wet rats who pull the steampunk levers in his desiccated brain would have processed it anyway. But it was a sorely needed message delivered directly. There was a lot of that happening on Tuesday.

Not long after, Homeland Security Secretary Kirstjen Nielsen, the pinched public face of Trump’s cruel immigration policy, was confronted at a Mexican restaurant near the White House. In a video, members of the Metro D.C. Democratic Socialists of America can be seen approaching her table clapping and chanting. “No borders! No walls! Sanctuary for all!” they chanted. “If kids don’t eat in peace, you don’t eat in peace.” After about 10 minutes she left, escorted by her guards, her tableside-constructed guacamole ruined.

DHS Secretary Nielsen just got driven out of a Mexican restaurant here on 14th Street by activists. DSA, I believe. pic.twitter.com/lTKutryXBO

Nielsen’s attempt to have a casual dinner in public on any other day would be ample cause for disruption. But on a day that the firestorm over her enforcement of the separation of children from their parents at the border reached a crescendo, and news was circulating wildly about the existence of literal baby jails, it was a mind-boggling show of hubris, only further adding insult to injury that the incident occurred at a Mexican restaurant.

It’s possible the disgusting optics of the dining attempt never even occurred to Nielsen, and that’s exactly the point of confrontations like these. For far too long the members of this administration, the directors of its hateful, racist policies, have been allowed to present themselves in polite society, relying on the self-policing adherence to civil norms from the spineless centrists and Democrats who have a vested interest in getting along and going along.

Throughout the country on Tuesday, protests were held at ICE facilities, including ones in Portland and San Francisco. One group in Portland blockaded the exits of an ICE garage, preventing workers from getting home. “DHS keep coming out to ask protesters to let 9 ICE employees to leave,” one wrote on Twitter. “’So they can get home to their families.’”

Direct actions like these—organized protests and marches, voter registration work, and all other political efforts—will, and need, to continue. But for people wondering what other sorts of action they can take in the meantime, the episode with Nielsen in the restaurant provides another necessary blueprint: You can make their lives a lot more annoying.

Also on Tuesday, hundreds of members of Attorney General Jeff Sessions’ United Methodist Church signed a letter accusing him of child abuse for enforcing Trump’s policy. Rev. William Lawrence, a leader in the church, told the media that the church’s rules allow members to be expelled, something he was hoping wouldn’t happen but was nonetheless on the table.

Support child abuse? No dinner for you. Enforce immoral practices? You’re not welcome at church anymore.

And it’s not just the leaders of this hateful administration that need to be inconvenienced either.

Yesterday, data artist Sam Lavigne posted a list on Medium of ICE agents he compiled by trawling through employment listings on LinkedIn. Medium and Twitter swiftly removed the accounts related to the post for violating rules on doxing, but the list can still be found online.

The intent, to be clear, is not to advocate harming the people involved or to call for violence. It’s simply an opening salvo in what should be the beginning of a shift in the way we treat both the architects and the instruments of fascist policy. Why shouldn’t an armed guard who spends their day stealing children from parents be subjected to some public shaming? If not them, who is shaming for?

Watching the policies of the Trump administration unfold has been disheartening for millions of people who feel helpless in the relentless onslaught of immorality and lawlessness. You’ve probably asked yourself what you can do.

It may not seem like much, but a fine place to start is to sharpen your social ostracizing skills. Your target doesn’t have to be an agent of the government, although it certainly is incumbent upon you if you see one of them (yes, any of them) in public to curse them out. It can also be your own friends and family. Let them know they are not welcome here. They are not welcome anywhere.

Go back and listen to the young woman yelling at Trump again. Her words can be heard reverberating throughout the rotunda as if in an echo. It sounds beautiful. 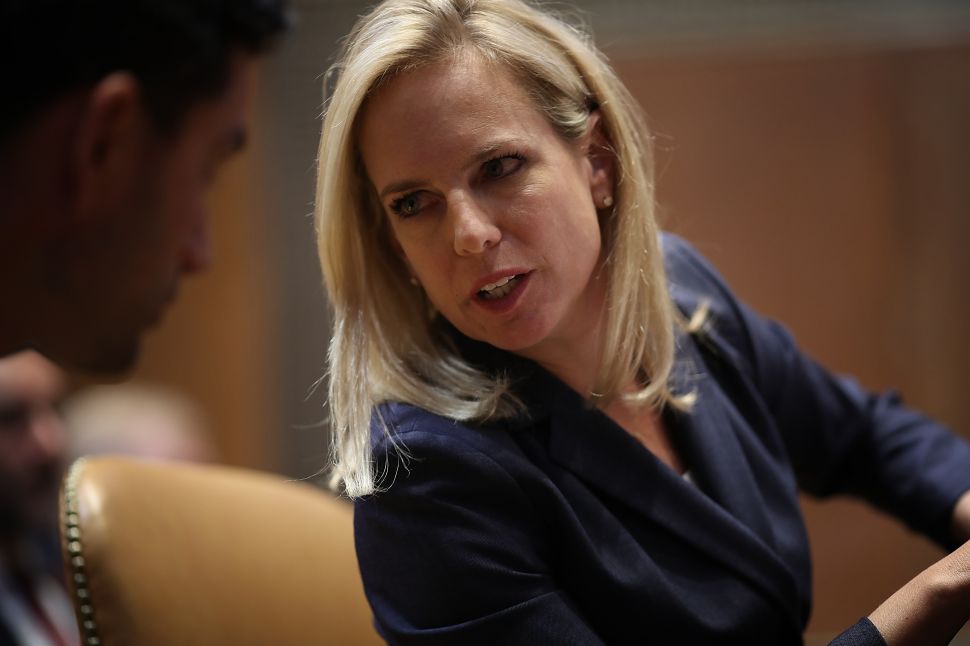