In the race to accrue social and literal capital, thereby winning over the hearts and minds of American constituents, it’s indisputable that the conservative right is in the lead. At this point there’s no need to reiterate that the sitting Republican president is a megaphone for discord from whom it is impossible to look away. Powerful news organizations of every stripe have revealed themselves willing to commit harakiri on the altar of high ratings, lavishing the administration’s racist, xenophobic, and downright nonsensical views and policies with 24/7 coverage, because unprecedented disasters make for great TV. (This is not to absolve members of print and digital media, who are, in a million different ways, also responsible for Trumplandia).

With primary and midterm elections currently in full swing, a clearer picture of the political faction that will dictate the future of the country is steadily emerging. It’s a crucial moment, and anyone who hopes to chime in must be willing to hold forth loudly and persuasively over a cacophonous din. If there’s a group that truly understands the necessity of speaking from the diaphragm, it’s the figureheads championing the conservative right, who are presently far more effective than the liberal pundits holding court at MSNBC. They’re not decent, not even reasonably unpolluted, but they garner millions of rabid fans and assure the endurance of American neo-nationalist proto-fascism.

When I refer to figureheads and commentators, it might be useful to explain the criteria by which this species may be defined. Since Socrates first annoyed grocery shoppers in the splendid agora of Athens by peppering them with questions about the meaning of life, the “gathering place” has served as a theater for public intellectuals, “free-floating and unattached generalists speaking out on every topic that came their way,” for whom careers (in the conventional sense) were nothing more than “the material foundation that allowed them to define and express their ideas.” Writer Barry Gewen sought to interrogate the existence of a “life of the mind” in his 2008 piece for the New York Times, but his evaluation also goes a long way toward describing the phenomenon of the 2018 media celebrity: a figure who appears seemingly out of nowhere with staunch opinions about everything, hordes of unflinchingly loyal followers, and whose source of income seems immaterial.

No one of sound mind and body would call Tomi Lahren an intellectual, but the Fox News contributor epitomizes conservative commentator domination in the present landscape. Lahren, a bigot who once referred to the Black Lives Matter movement as “the new KKK,” cut her teeth as an on-camera personality by railing against the Council on American-Islamic Relations and Beyoncé in segments for TheBlaze. She recently enjoyed the validation of explicit support from the president in the form of a tweet. Lahren is “a truly outstanding and respected young woman,” Trump wrote; excuse me while I vomit.

Lahren, like many of her ilk (Sean Hannity, Alex Jones, Candace Owens, Ben Shapiro, Dana Loesch, the list goes on), has marked her territory in media by adopting the blind animosity of exclusionary neo-nationalists and border wall enthusiasts to the tune of substantial paychecks and tremendous clout with legions of fans ready and eager to do her bidding. Lahren and her peers inspire devotion by acting as perpetually outraged and combative as Trump supporters feel. The journalist Jesse Barron described this energy in the February 2017 issue of Bookforum: “In [Trump’s] obliteration of consensual constraints—his swearing, boasting, not releasing his tax returns—they see the possibility of others being lifted too,” Barron writes. “Things that were not possible before may become possible. That this may all end in farcical tragedy does not escape them, but only compounds the sense of excitement.”

The promise of imminent change is galvanizing for people with discriminatory views. Jared Holt, a research associate at People For the American Way who specializes in Alt-Right and “New Right” media, told Observer it makes sense that the “populism and idol worship” embraced by the current administration would translate over to “the grievance culture that has fermented in conservative media,” which “plays into people’s desire to defend conservative media critics who claim to be persecuted by anything and everything.”

The right is so adept at producing popular mouthpieces because its major players can perform a spectacularly disingenuous rhetorical trick. First, secrete a heinous and deliberately inflammatory ideological turd; second, shriek that your inalienable rights are being violated when someone points out that your shit stinks. Like clockwork, your supporters will rush to your aid.

When I started to think about the battle for nationwide ubiquity between liberals and conservatives, I wondered why the left hadn’t yet given rise to their own version of someone as popular with her base as Lahren; perhaps a radical socialist Twitch streamer with legions of #PissTape-obsessed fanboys. Lahren’s views are disgusting, but she consistently succeeds at winning over devotees who perpetuate her bile; it seemed useful to parse through whether any of her stratagems could be pilfered for leftist use.

However, while the right and the left each want their side to represent the dominant school of American thought, their motivations are entirely different. “The liberal media is coming off of years of playing defense for the Obama administration, and now are playing offense,” said Holt. “I think when you’re leading the charge against an administration it’s harder to congregate around one central figure.” In other words, there’s no such thing as a “Leftist Answer to Tomi Lahren” because Lahren’s methods are married part and parcel to the conservative agenda; the method is the message. Liberal objectives simply aren’t conducive to generating the same kind of absorbingly noxious firebrand.

That said, there’s no doubt that liberal figureheads could stand to update their strategies. Leah Finnegan, features editor of The Outline, has written extensively about the media’s many failures to produce sufficiently adversarial work. Finnegan has also critiqued the liberal tendency to treat comedians like unparalleled radical thinkers. Milquetoast advocates for polite discourse like Trevor Noah, “especially those who are the face of multi-million dollar operations owned by mainstream television networks, are ultimately menaces to thought,” writes Finnegan. “They will not save anyone. They exist to heighten their own impact, fame, and brand, and make liberals feel like watching a television show is a political act.”

So, who will establish herself as the Jane Fonda of an increasingly fascist post-Trump America? The congenial late night hosts are too stuffy or too lenient or too centrist, the Brooklyn-based DSA podcasters are too niche, and the model-actress Instagram influencers are too wrapped up in careerism (in this economy, who can blame them, really) to brand themselves as full-throated activists. The notion that someone could fill the role of Leftist Avenger might be a fantasy, but about just one thing I am absolutely certain: nobody will ever be able to scream as loudly as Alex Jones. 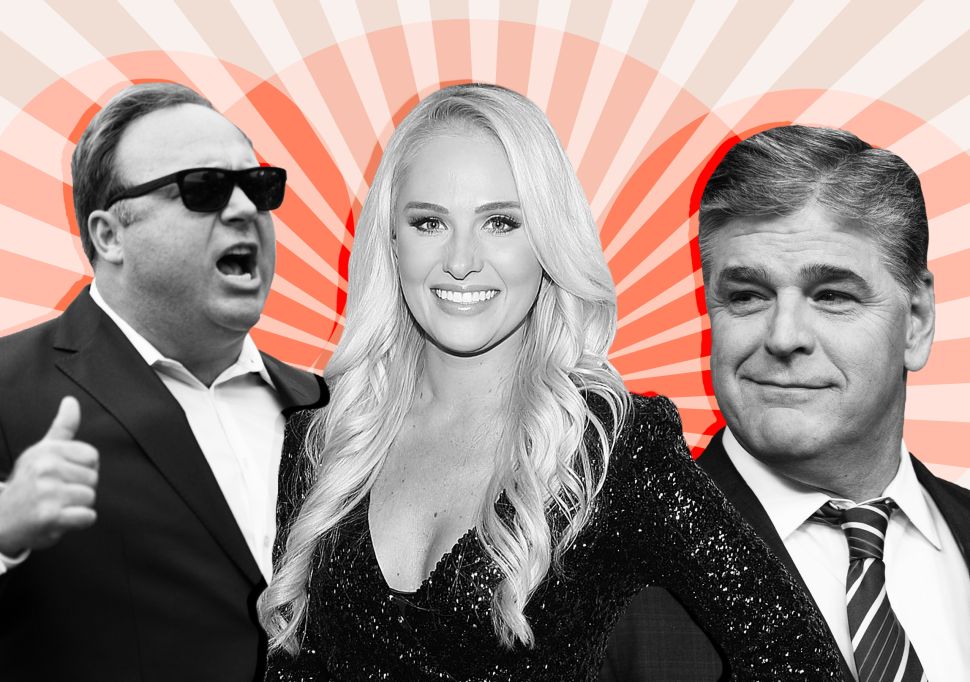