Our favorite ladies of wrestling are stepping back in the ring on June 29 with the return of Netflix’s breakout hit, GLOW. Based on the real ’80s wrestling show of the same name, the first season served as something of an intro into the artistry and acting that makes up this unique form of athletic entertainment—garnering a 95 percent fresh rating on Rotten Tomatoes in the process. Early reviews of season two suggest that Netflix has topped itself, so far drawing more lauds than the first.

This season, hoping to capitalize on their cult following, the merry band of novice wrestlers are looking to transform their campy troupe into a smash hit TV show. At the center of all the action is Marc Maron as Sam, the curmudgeonly team wrangler, and Alison Brie as Ruth, the petite wrestler searching for a place to belong.

The duo recently sat down with Observer to talk about how they train for their roles (athletically and otherwise), the chemistry between their characters and why being a wrestler is a lot like doing stand-up comedy.

You two were cast on this show in very different ways. What exactly happened?

Marc Maron: I just put myself on tape with someone. My assistant shot us and that was it, they booked me off of that. It was quite surprising. I really didn’t expect anything, and I was completely amazed that they cast me off of that.

Alison Brie: I love hearing that story, it sounds like a dream. My experience was quite the opposite. I really had to fight for the role. I had finished Mad Men and Community, and had taken a year off. Then I really wanted to do another show because I like working in television—I feel like there are better opportunities for women to play interesting characters on TV. When I got this script, it was beyond my wildest dreams; it checked every box of something I wanted to do. Then, of course they didn’t want to see me for the part, but amazingly I had a series of auditions. Each time I came back, every time—with no make-up on, my tight-fitting wrestling clothing, doing a Russian accent. I even did some wrestling moves a couple of times.

MM: So, you did like some of the crazy stuff that Ruth did in trying to get into the gym?

AB: Absolutely, I felt more and more like Ruth every time I came in to audition and every time I left, I would cry in my car because I thought it wasn’t going to happen. When I finally got the call that I got the part, I sobbed tears of joy.

What kind of training did you have to do for the wrestling part?

AB: Well, I’d been working with my personal trainer for six years or so before getting this job, but it was finally our moment to step it up and do more intense strength training. And I wanted to be ready to support other women physically in the ring. As a group, we do a month of wrestling training before shooting. We did it before season one and we did it again before season two.

MM: It’s so funny, because I think one of the reasons Alison is so perfect for GLOW is that Ruth is so not perfect for GLOW. The idea though of somebody your size as a wrestler is something completely ridiculous, which makes for such great comedy.

And Marc, how did you prep to play Sam?

MM: I didn’t watch the original GLOW TV show [from 1986] because I was told that my character didn’t know anything about wrestling. I was like, “Great, that’s gonna work for me!” But I’ve interviewed wrestlers on my podcast so I know Mick Foley, CM Punk, Colt Cabana and AJ Lee. The thing is, I wasn’t a wrestling fan as a kid or anything, but I grew to appreciate it and I kind-of found that there are some similarities between becoming a professional wrestler and becoming a stand-up comedian, that was fascinating to me.

What do you think wrestling and stand-up comedy have in common?

MM: Well, they’re kind-of both scripted, and in both cases, you have to do these shitty gigs to get anyone to notice you. Like, there’s this touring mechanism in wrestling where, as they’re becoming better wrestlers, they do these horrible shows in small venues and that’s sort of like the open mic circuit of doing stand-up. They both have this thing where you’re sort of learning how to do it, while kind-of paying your dues basically.

About the scripted part…

AB: Actually, we’ve learned that a lot of wrestling is more physical improvisation in the moment, and open communication between the wrestlers minute by minute in the ring, than prior planning. To relate it back to stand-up again, it’s just really experienced wrestlers who wrestle with each other and they’re just communicating to one another what’s going to happen. So, while they’re wrestling in the ring—unbeknownst to the hundreds of people watching—the wrestlers are really [staying] in tune with the audience and can see who they’re rooting for, so they know who needs to ham it up and stuff.

AB: In season one we were really setting up a lot of stuff so that in this season we have the luxury of exploring the characters’ lives a lot more. We have 15 women on the show this season, and that means there’s just so much more story to tell.

MM: And, there’s a lot with making the actual GLOW show and production stuff about the politics of dealing with the network. Some things happen with the power dynamics of the characters and you see more of the crew; there’s more dudes on set, holding cameras, dressed all ‘80s like.

AB: The environment really shifts once we get into filming the show, and so this season is basically the launch of GLOW on TV, dealing with small time fame, having some fans, and just trying to keep it all going. And the women get a little competitive with each other for the first time, now that they’re competing for air time and attention from fans, so it’s all amping up.

MM: Well, they don’t start off great in season two. I have a little ego meltdown for a couple of reasons and I take it out on her. So, we’re kind-of at odds for a while, but then Ruth steps back in and helps me deal with some stuff, and then we make up.

AB: These two characters don’t have a lot of friends so they really do need each other. The push-and-pull of that makes for a very interesting relationship.

With the show set in the ‘80s, what do you like about that time period and what do you hate?

MM: Well, to me it’s hilarious that people smoked everywhere and didn’t think twice about it. That’s certainly different from now.

AB: Also, there’s an innocence that comes with not having cellphones. The characters aren’t wrapped up in social media, either. I sort of love that about the ‘80s. Oh, and I love having a perm for the show, and then as soon as we finish shooting, I hate the perm.

What would you say to someone who thinks the show is just about ladies wrestling, and doesn’t think that will be interesting to them?

MM: Oh, it’s about so much more than that. We’re talking about the overall struggles of life here, especially when you’re looking at how people are with each other. That’s real stuff there. And, it’s super funny too. So, you’ll laugh a lot. If you wanna laugh and feel some stuff, watch this.

AB: And I think what everyone can relate to that this is a story about a random collection of people who had nothing better going on in their lives and then they found this outlet. Everyone is looking for something like that, right? Someplace to fit in. When you find those people that really get you, you want to stay together, and that’s not always easy. GLOW is about a bunch of underdogs and everyone loves to see the underdog rise up and win. We all need something good to root for. That’s what this is. 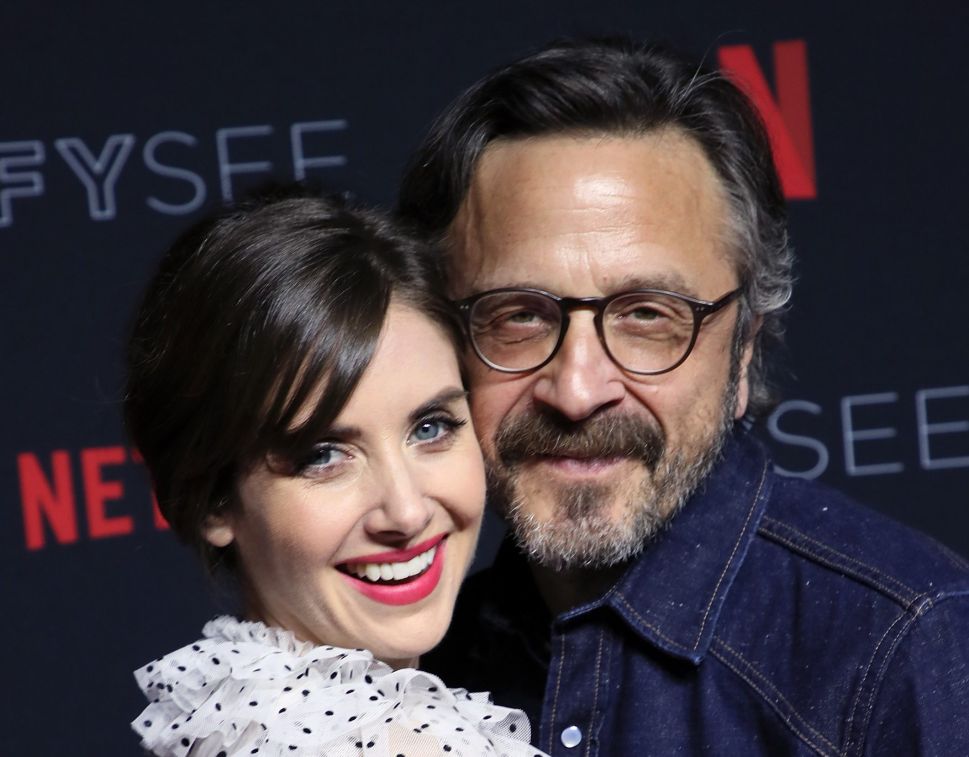