Whether Utah qualifies as America’s resident theocracy (as its founders intended) is a subject of debate, but no reasonable person can deny the significant power wielded there by the Mormon church.

In state politics, the church’s presence looms in a way Amazon or the Koch brothers do elsewhere. In 2016, a hate-crimes bill was scuttled in the state Legislature because, the bill’s sponsor said, “of a press release issued by my church.”

Holy writ aside, money is power, and the Church of Jesus Christ of Latter-Day Saints has an unholy pile of it. Its adherents gave the church a reported $33 billion in tithes alone in 2010, and, that year, church leadership gleaned another $15 billion from investments in real estate and the stock market.

All this is to say that while the Mormon church is not invincible and its dominance over day-to-day life in Utah may be waning, it remains a major player in Utah politics. This underscores the significance of the church’s predictable and steadfast opposition to a state voter initiative, which will appear on Utahns’ ballots in November 2018, that would legalize medical marijuana.

On its face, standing in the way of giving medical marijuana to sick people doesn’t seem like a political winner for the church.

Just under 63 percent of Utahans identify as Mormon. Perhaps unsurprisingly, a similar number of Utah voters identify as conservative. But tracking with the rest of the country, these self-described conservative Republicans overwhelmingly support medical cannabis—a stance also shared by U.S. Sen. Orrin Hatch, himself a Mormon.

But Hatch is retiring, and key population centers in Utah like Salt Lake City are becoming steadily less Mormon. Though most Mormons say they are still heavily involved in church activities, the LDS church is not infallible—when church elders branded same-sex couples as “apostates,” hundreds of members resigned in protest. All this to say that while the church is still a political and economic powerhouse, there are cracks in the facade—cracks that are less apparent in institutions like the state Legislature, where 90 percent of elected representatives are Mormon.

If passed, the Utah Patients Coalition’s proposed initiative would be among the nation’s most restrictive cannabis laws—laws that have not created any intractable problems anywhere else in the union, according to data—but the church is nonetheless claiming that limited cannabis access for sick people would create “serious adverse consequences” for the state.

But so far the church has stopped just short of telling its members outright to vote against the initiative—that would be “political campaign intervention” as opposed to mere “issue advocacy,” a technicality that nonetheless allows the church to hang onto its tax-exempt status—but it is clear the church feels threatened in some way.

There is a worldly theory: According to a trove of documents obtained and published by MormonLeaks and analyzed by a Reddit user, about $1 billion of the church’s $32 billion in stock-market holdings are in pharmaceutical companies. Pharmaceutical companies oppose medical marijuana for obvious reasons—if cannabis is medicine you can grow at home, the value of patented medicines drops—but there is a spiritual angle as well. For proof, look at the Catholic Church’s similar reaction.

In 2016, with marijuana legalization looming in California, Salvatore Cordileone, San Francisco’s own archbishop issued a statement “inviting” voters in his flock to oppose Prop. 64. Cordileone’s opposition wasn’t surprising—a known and outspoken political conservative, Cordileone led marches against gay marriage—but even the much chiller Pope Francis has made his opposition to drug legalization known. Leaders from other religious traditions have also signed onto other similar policy statements that alternately try to tie cannabis legalization to the opioid epidemic or proclaim that legalization is just a cover for the billion-dollar marijuana industry.

But how does weed threaten religion, exactly? The answer is simple and cynical.

Harken back to the Mormon church’s blanket prohibitions on alcohol and caffeinated beverages (the latter of which even ISIS does not deny its adherents), and remind yourself why drug prohibition began in the first place. Identifying (or in this case, creating) “individual deviance,” discouraging it, and “encouraging conformity” is the very definition of social control. Laws like drug prohibition are instruments of social control, but their purpose and function are obvious enough.

Remind yourself what the typical pattern of behavior is in the face of a threat. It is to lash out and in: to attack and neutralize the threat, while clinging ever tighter to what’s left. Here again the Catholic Church provides an example. Its power is declining across the world. In heavily Catholic Ireland, voters just legalized abortion, a few years after legalizing gay marriage. This follows a pattern seen in other countries.

Here’s the thing with religious dogma: there’s no room for debate or reform. Religions are there because they provide the easy answers. They provide a solution to the dilemma of freedom and all the anxieties uncertainty creates.

And that’s also dogma’s central flaw. Put one crack in the facade and five more appear. Start tracing those lines, and the whole edifice will crumble.

Putting theology aside for a moment, churches exist to consolidate and dispense power. Both the Mormon and Catholic churches have an organized central hierarchy and significant wealth in real estate and other worldly possessions. And they do so even more profoundly within a religious framework. What is more powerful than the source of creation itself, and the force that sets the rules that determine the difference between heaven and hell? If you can get someone to listen to one rule, maybe they’ll listen to another. They might even swallow the whole list. Imagine what else you could compel someone so swayed to do!

Not long ago, Utah restaurants were allowed to remove their “Zion curtains”—the glass partitions set up between bar patrons and the bartenders mixing their drinks. The Mormons ceded ground there. If it yields on marijuana legalization, what might be next?

In this way, marijuana legalization is a symptom of religions’ recognition that their monopoly on these answers is weakening. Their choice to stand in the way—and get run over—is only accelerating their decline. 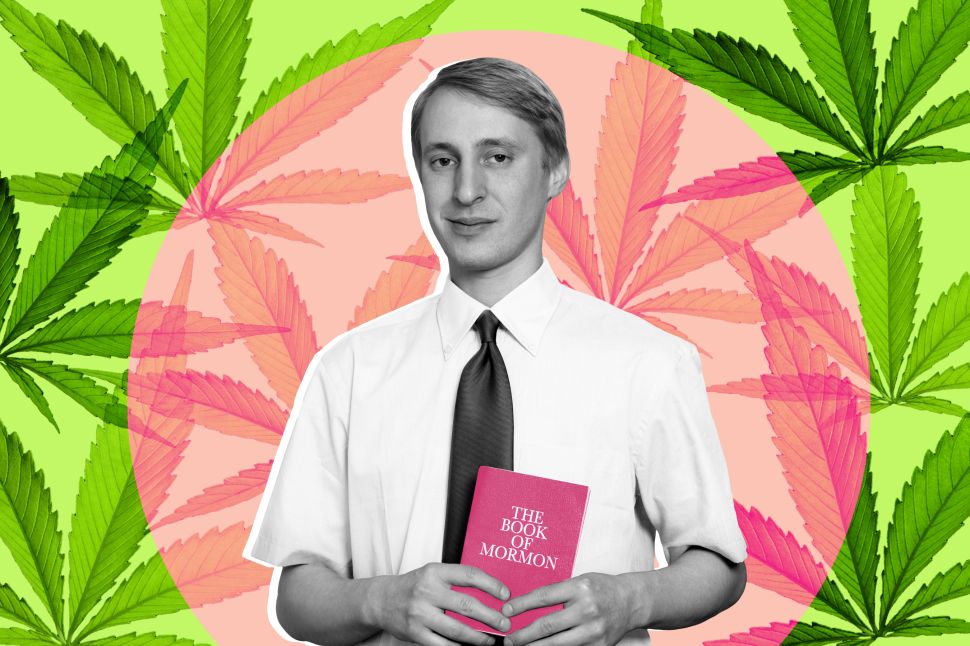