A clunky bit of exposition serves as a prologue to Ant-Man and the Wasp. The gruff industrialist inventor Hank Pym, played by Michael Douglas, is explaining to his daughter Hope, played by Evangeline Lilly, about the disappearance of her mother years before in what is called in the movie “the Quantum Realm.”

The speech was notable for several reasons. First, because the 11th grader with whom I saw the film recounted the same story moments before the movie started because she was worried I might not be up-to-date on the various nuances of what is known as the MCU.

Next, because the scene was noticeably leaden in a way that few were in the effervescent previous film in the series, 2015’s Ant-Man. (Which is to say, my guest laid out this backstory with more fun and efficiency than Hank did.)

And third, because it set the movie up as a rather serious rescue mission on behalf of this humorless father and daughter team—not exactly the kind of bouncy, pop art affair one expects from an Ant-Man movie.

But then Paul Rudd shows up, and things get back on course, at least temporarily. Rudd’s Scott Lang starts the film under house arrest due to  his actions in 2016’s Captain America: Civil War and is on the outs with Hope and Hank. (Mind you the house he’s stuck in is a glorious, rambling Victorian in San Francisco that makes you think that when Scott wasn’t fighting super villains, he was investing early in Facebook).

While Scott is sans his magical suit, reduced to creating an elaborate cardboard maze reconstruction of his Ant-Man adventures to entertain his daughter Cassie (a returning Abby Ryder Fortson), Rudd is at the peak of his abilities. His physical comedy is sharper than ever, and he has a preternatural ability to relax while everyone else involved in the film is tensing of up under the weight of their corporate responsibilities. He is given a terrific new comic foil in Randall Park, as the FBI agent in charge of his parole, and he still has his old one in Michael Peña’s speed talking Luis, though like everything that doesn’t connect to the other Marvel movies, Luis is considerably more reigned in than before.

If only Rudd’s counterpart had half his ebullience. Disappointingly for the first female character to headline a Marvel movie, Lilly’s Wasp doesn’t have much of a personality beyond grim-faced and efficient. As a result, the pairing of a goofball wiseacre guy and a no-nonsense female ass-kicker makes Ant-Man and the Wasp feel like a big screen version of CBS sitcoms like The King of Queens, with the funny guy and the hot, eye-rolling wife. As the original Wasp who had been trapped for a generation in the “nebular void” (an apt description of what these Marvel movies are starting to feel like), Michelle Pfeiffer gets to be little more than maternal and otherworldly.

The tasks the trio (the movie should be really be called Ant-Man, the Wasp, and an Old Guy) take on are not terribly interesting: in addition to the rescue mission, they spend most of the movie chasing around Hank’s incredible shrinking laboratory. But the villains they face generally are. Chief among them is Ghost (Ready Player One’s Hannah John-Kamen) who has the ability to pass through matter as if it weren’t there. It’s a painful affliction as much as it is a superpower, and it was cursed upon her thanks to the ambitions of her father—just one example of the themes of family responsibility that run through the movie, which are never satisfyingly explored.

But then this movie isn’t really about ideas. (For that, see Incredibles 2). It’s about keeping the levity and comedic aspects of the Marvel brand afloat while the other films turn darker and more portentous. And Ant-Man and the Wasp accomplishes that. If the previous film was a bubbly champagne cocktail of a superhero movie, its sequel is something flatter and more concussive—akin to a series of vodka shots.

Bottom line though, as long Paul Rudd is invited, it’s still a party. 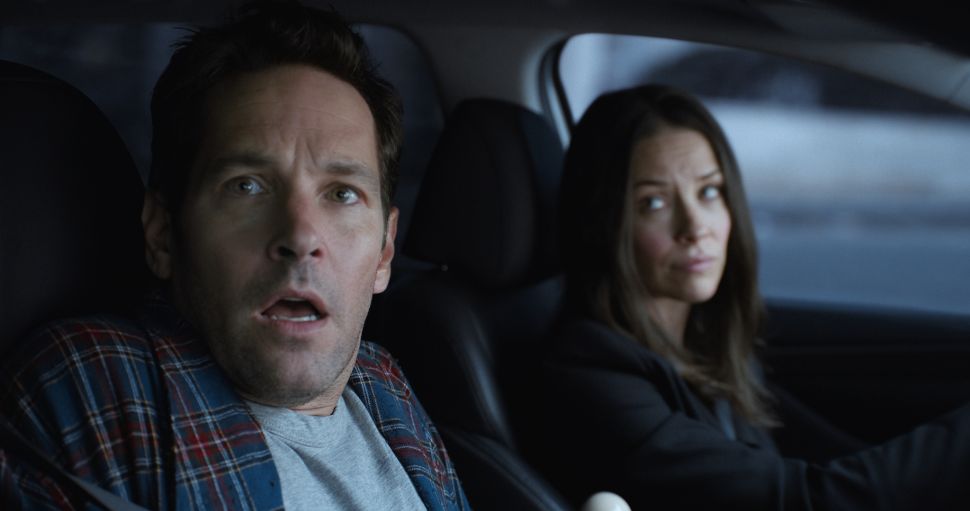