Legislators raced to pass the bill in hopes of making New Jersey the second state outside Nevada to legalize sports betting after the U.S. Supreme Court struck down a federal ban on the wagers. Delaware began accepting bets on Tuesday.

The Assembly passed the bill by a 73-0 vote, and the Senate later approved the bill, 37-0.

“New Jersey has led the way on sports betting and we will now capitalize on our decisive Supreme Court victory by putting in place a vibrant sports gaming industry,” Senate President Steve Sweeney (D-Gloucester) said in a statement. “We can now seize the opportunity with a new sector of gaming that will help create jobs, generate economic growth and be an important boost to the casino industry and horse racing.”

The legislation (S2602/A4111) establishes a framework for the licensing and operation of sports betting at the state’s casinos and racetracks and sets tax rates for bets placed in-person and online.

Lawmakers removed language from the bill on Thursday that would have prohibited casinos and racetracks from taking bets before the measure becomes law. With the amendment, Monmouth Park racetrack in Oceanport could theoretically start accepting wagers, though track operator Dennis Drazin said he wanted to first speak with Murphy before trying to open its sports betting operation.

“I want to reach out to the governor and see what his position is. And if he told us he doesn’t want us to open, I would be reluctant to open,” said Drazin, who was at the state house for the votes. “I’m trying to encourage everyone to let us get open.”

Murphy, a Democrat, has publicly supported sports betting. But it’s unclear whether he will sign the current version of the bill into law. Earlier this week, a Murphy spokesman declined to comment on the bill but said the governor “looks forward to working with the legislature to enact a law authorizing and regulating sports betting in the very near future.”

Lawmakers made another amendment on Thursday to allow casino owners who also own professional sports teams to accept bets at their gambling halls, but only on sports other than those in which they own a team.

A previous version of the bill would have banned casino owners who had more than a 10 percent stake in a team from accepting wagers. That would have disqualified one Atlantic City casino, the Golden Nugget, from offering sports betting since its owner also owns the Houston Rockets.

The amendment would let Golden Nugget take bets on all sports except for NBA games.

The bill was opposed by professional sports leagues, which have argued the measure lacks the tools needed to keep their games free from cheating. Among other things, the leagues want a 0.25 percent “integrity fee” on the amount gambled on their games. The leagues say they will have to spend more on monitoring bets and investigations with the nationwide expansion of sports gambling.

“The legislation does not include basic protections to mitigate risks to the integrity of sports and to ensure fairness for New Jersey consumers,” the MLB, NBA and PGA said in a joint statement. “The legislature’s decision to ignore the legitimate interests of sports leagues, universities and sports fans is not in the state’s long-term interests.  We urge Governor Murphy and legislators to fix the legislation so the state can have a first-class betting market, while preserving the integrity of sports for New Jersey’s passionate fans.”

Five of the biggest sports leagues in the country sued New Jersey to prevent the state from legalizing sports betting, costing the state roughly $9 million in legal fees.

Under the bill, the state Division of Gaming Enforcement would regulate the sports gambling operations. Only people 21 and older could place bets on professional and collegiate games, though wagers on collegiate games that take place in the state or involve New Jersey schools would largely be prohibited, with an exception for bets on tournaments.

The bill would impose an 8.5 percent tax on the revenue generated from bets at the state’s casinos and race tracks and a 13 percent tax on online wagers. An additional 1.25 percent tax would be dedicated to the racetracks’ host municipalities and counties, while another 1.25 percent Investment Alternative Tax would go toward the Casino Reinvestment Development Authority, which would spend the money on marketing Atlantic City. 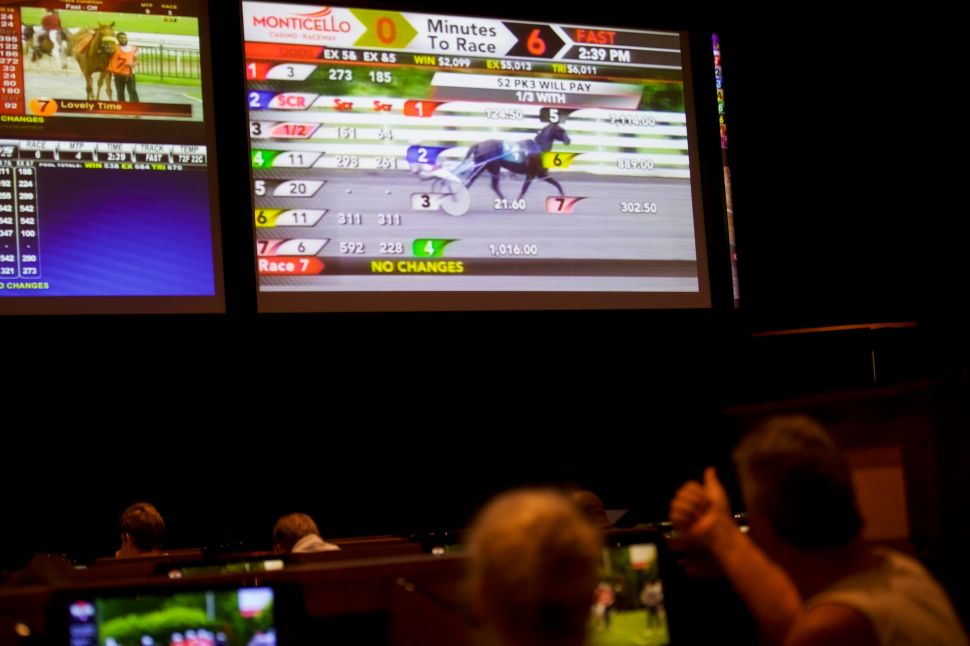