The outlook was decidedly twee last Wednesday night: the world premiere of a one-act opera based on Hans Christian Andersen’s weird fairy tale, The Elf of the Rose, debuted in a catacomb in Park Slope’s Green-Wood Cemetery.

Oh, and did I mention the audience—the customary new-music mélange of hipsters and oldsters—arrived at the venue on a trolley, brandishing glow sticks?

If on paper the event threatened a level of bizarrerie sufficient to daunt Taylor Mac, in real time this presentation of the new concert series The Angel’s Share turned out to be just about everything you want opera to be. The Rose Elf shocked, confounded, disturbed, and, in the end, exalted.

That this crazy-ass project took wings is the triumph of curator and impresario Andrew Ousley, whose dream, cockeyed as all great visions must be, is to present classical music in brief, vivid form in unlikely urban spaces: inside a disused subway station, atop a skyscraper under construction.

A catacomb, though, is entirely consonant with the mood of Andersen’s morbid tale of a microscopic elf that helps a bereaved girl take revenge on her brother, who has murdered her lover. (How morbid is the story, you ask? Well, a major plot point is that the girl enshrines the boyfriend’s severed head in a flowerpot.)

Composer and librettist David Hertzberg creates fantastical soundscapes deftly contrasting the human world—mostly harsh dissonances and startling aleatory noises—and the pantheistic sphere of the Elf, a mist of impressionistic shimmer. The nine-piece chamber orchestra at the far end of the corridor, fluidly conducted by Teddy Poll, conjured a vast range of textures and volumes.

Even more impressive was Hertzberg’s word setting, a fluid arioso style ranging from blunt single-note recitative for the brutal brother to wide-ranging melismas for the protean Elf.

That the Elf’s vocal line also dips down into a sustained, almost jazzy chest register more than suits mezzo-soprano Samantha Hankey in the role. Neither visually nor aurally is she the mite of Andersen’s story; rather, she could be Hecate or Parvati, a fully bloomed goddess of creation and destruction.

Indeed, director R. B. Schlather banishes any hint of cuteness from Hankey’s first entrance, revealing her backlit and towering in a silver lamé sheath and clutching an armful of blood-red roses like a goth Tosca.

Schlather, as is usual in his work, doesn’t waste his time on narrative but instead offers disturbing oneiric images hinting at a story beneath the story. The Brother, the Girl and her Beloved were first revealed in a sensuous yet fraught three-way embrace, not so much a cuddle puddle as a cuddle struggle.

The lovers (soprano Alisa Jordheim and tenor Kyle Bielfield) don’t sing much until the end of the opera, an apotheosis of high Straussian wailing, but the Brother, at least as portrayed by the lithe bass-baritone Andrew Bogard, is a tour de force of testosterone-fueled declamation and physical prowess.

At one point, dressed in a ’90s club kid outfit of clashing floral patterned muscle shirt and track pants, Bogard slithered the length of the concrete floor of the catacomb like a serpent right out of Genesis.

I approached this show with something less than enthusiasm, dreading the 25 stops on the R train it took to get there. But for the next project by the Rose Elf team, I’ll be ready to climb Mount Everest. 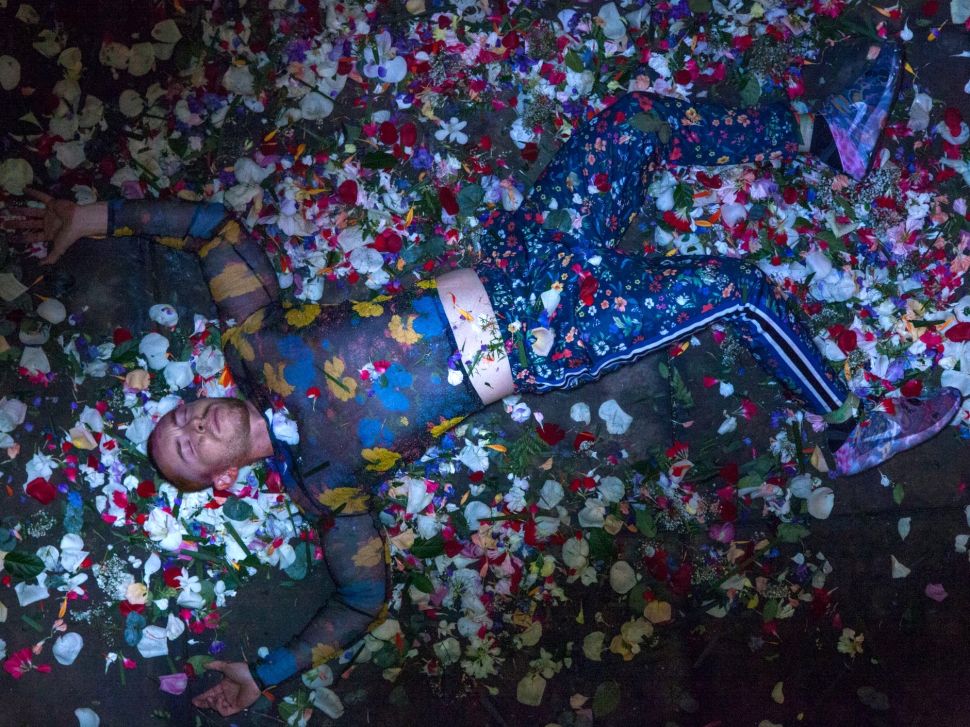