While the United States Constitution is less than clear about whether a president can pardon himself, there are good reasons that no one has ever tested the theory.

“Our Constitution confers this discretion on the highest officer in the nation in confidence that he will not abuse it,” said William Howard Taft, former United States President and former Chief Justice of the Supreme Court.

Facing a seemingly never-ending and ever-expanding investigation by Special Counsel Robert Mueller, President Trump once again went on the offensive. On June 4, he tweeted:

“As has been stated by numerous legal scholars, I have the absolute right to PARDON myself, but why would I do that when I have done nothing wrong? In the meantime, the never ending Witch Hunt, led by 13 very Angry and Conflicted Democrats (& others) continues into the mid-terms!”

President Trump is largely correct in suggesting that many legal scholars agree with his position. The reason: the president’s authority to issue pardons is extremely broad. Article II of the Constitution simply states: “The President… shall have Power to grant Reprieves and Pardons for Offenses against the United States, except in Cases of Impeachment.”

In The Federalist No. 74, Alexander Hamilton explained the founding fathers’ rationale for giving the president a discretionary power to pardon: “The principal argument for reposing the power of pardoning… [in] the Chief Magistrate,” Hamilton wrote, “is this: in seasons of insurrection or rebellion, there are often critical moments, when a well-timed offer of pardon to the insurgents or rebels may restore the tranquillity of the commonwealth; and which, if suffered to pass unimproved, it may never be possible afterwards to recall.”

While the founding fathers debated requiring the Senate to sign off on pardons, the proposal was defeated. According to Hamilton, the Senate should not be involved in pardons because “one man appears to be a more eligible dispenser of the mercy of government, than a body of men.”

The U.S. Supreme Court has generally refused to place restrictions on the presidential pardon power. In the 1866 case of Ex parte Garland, the Court first recognized the prospective pardon. As Justice Stephen Field explained:

“The power thus conferred is unlimited, with the exception stated. It extends to every offence known to the law, and may be exercised at any time after its commission, either before legal proceedings are taken, or during their pendency, or after conviction and judgment. This power of the President is not subject to legislative control. Congress can neither limit the effect of his pardon, nor exclude from its exercise any class of offenders. The benign prerogative of mercy reposed in him cannot be fettered by any legislative restrictions.”

In 1871, the Court struck down a federal law that sought to limit the presidential pardons issued by President Abraham Lincoln in the wake of the Civil War. According to the Court:

“It is the intention of the Constitution that each of the great coordinate departments of the government—the Legislative, the Executive, and the Judicial—shall be, in its sphere, independent of the others. To the executive alone is entrusted the power of pardon; and it is granted without limit. Pardon includes amnesty. It blots out the offense pardoned and removes all its penal consequences. It may be granted on conditions… It is clear that the legislature cannot change the effect of such a pardon any more than the executive can change a law.”

In 1925, the Supreme Court clarified the phrase “offenses against the United.” In its decision in Ex parte Grossman, the Court rejected the argument that pardons could not be issued for criminal contempt cases.

While the Supreme Court has never suggested that self-pardoning would run afoul of the Constitution, some legal scholars still believe it would be illegal.

In 1974, Acting Assistant Attorney General Mary C. Lawton authored a Department of Justice memo regarding the possible pardon of President Richard Nixon. It concluded that the president was not authorized to self-pardon.

“Under the fundamental rule that no one may be a judge in his own case, it would seem that the question should be answered in the negative,” the memo stated.

Debate over the ability of a president to pardon himself has been resurrected under President Trump. In a 2017 editorial published in The Washington Post, Harvard constitutional law professor Laurence Tribe and former Chief White House ethics lawyers Richard Painter and Norman Eisen argued that the Constitution prohibits President Trump from pardoning himself.

“The Constitution specifically bars the president from using the pardon power to prevent his own impeachment and removal. It adds that any official removed through impeachment remains fully subject to criminal prosecution,” they wrote. “That provision would make no sense if the president could pardon himself.”

Should President Trump pardon himself, Congress would likely determine what happens next. As Chief Justice Taft noted in 1925, “Exceptional cases like this, if to be imagined at all, would suggest a resort to impeachment rather than to a narrow and strained construction of the general powers of the president.”

Launching impeachment proceedings requires a simple majority in the House, while a two-thirds majority vote in the Senate is needed to convict a president and remove him from office.

President Trump would also have to deal with the fact that pardoning himself implies that he did something wrong. As the court noted in a lawsuit challenging the pardon of Richard Nixon by President Gerald Ford:

“[A]s the very essence of a pardon is forgiveness or remission of penalty, a pardon implies guilt; it does not obliterate the fact of the commission of the crime and the conviction thereof; it does not wash out the moral stain; as has been tersely said; it involves forgiveness and not forgetfulness.” 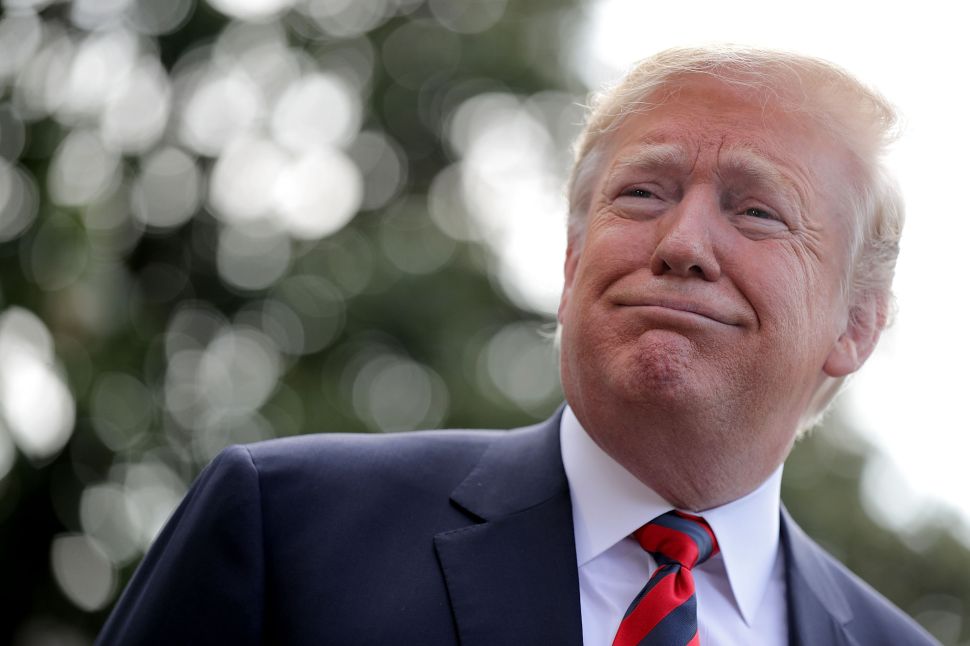