Inspired by a cottage industry of formulaic male-dominated action-driven caper flicks from the early Ocean’s Eleven with Frank Sinatra and the Rat Pack in the 1960s to all of the silly, contrived George Clooney-Brad Pitt Ocean’s remakes, knockoffs, and sequels of sequels, an all-star cast of #MeToo celebrants are now determined to prove how empowered women can make the same smart, entertaining heist movies as men.

For most of Ocean’s 8, the idea works.

Unfortunately, what it sometimes demonstrates is the sad fact that women can also make movies that are just as self-indulgent and preposterous. Like Ocean’s Thirteen, the last and least successful Clooney-Pitt frolic 10 years ago, this one is comprised of pretty much the same plot and the same gimmicks, but the big difference is the perpetrators are easier on the eye.

Sandra Bullock is Debbie Ocean, the sister of master criminal Danny Ocean, the role Clooney played until both the role and the actor ran out of energy and ideas. Danny is dead, but Debbie is a chip off the old block. Recently released after five years in prison in the custody of a parole officer who never writes, never calls and is never seen, she’s newly dedicated to a fresh life of crime.

Thinking big, she first robs Bergdorf Goodman of all the perfume, lipstick and lace panties she will need, then lies her way into a suite at the Plaza Hotel and begins to recruit a team of seven other beautiful crooks to carry out a scheme that would defeat Bonnie and Clyde. Banks are old hat. Now it’s the over-hyped and superficial costume gala at the Metropolitan Museum, where Debbie and her gang plan the most elaborate, methodical and expensive jewel robbery in history, involving the theft of a six-pound $150-million diamond necklace that will be worn by a bubble-headed celebrity model and cover girl (Anne Hathaway).

To hatch this plan, in comes gum-chewing, no-nonsense Lou (Cate Blanchett), Debbie’s old partner in crime; seasoned fence and suburban mom Tammy (Sarah Paulson); computer hacker Rihanna; eccentric, over-the-hill fashion designer Rose (Helena Bonham Carter); and a crew of comely comrades. They are all fine, but none is given what you might call a juicy chance to fill out a real scene-stealer of a role in a pallid, passive script by writer-director Gary Ross (Hunger Games). For all the gender bending on view, it’s a shame the talented, resourceful ladies didn’t demand a female director.

The movie chronicles each step of the heist, from the opening strategy to the fabulous Toussaint necklace under lock and key for the past 50 years beneath five feet of solid concrete in a vault beneath Cartier, to the security details, surveillance, tapped phones, guest lists, and seating charts, leading up to the first Monday in May, which is always the night of the annual fund-raising costume gala at the Met, described as “the most important party invite of the year.” As the girls infiltrate everything from the Vogue offices at Conde Nast to the Met Gala catering truck, the film expands to include cameos by the famous fashion designers and hair and makeup artists who crowd the pages of Women’s Wear Daily, and guest appearances by Marlo Thomas, Dakota Fanning, Katie Holmes, Serena Williams, Heidi Klum, Elizabeth Ashley, James Corden, and even Vogue editor Anna Wintour herself.

It all adds up to an appealing if inconsequential piece of fluff.

The more ornate the plot becomes in the final half-hour and the more twists it piles on, the more impossible it is to follow. But fortunately, the girls pull off the heist—and the movie, too. 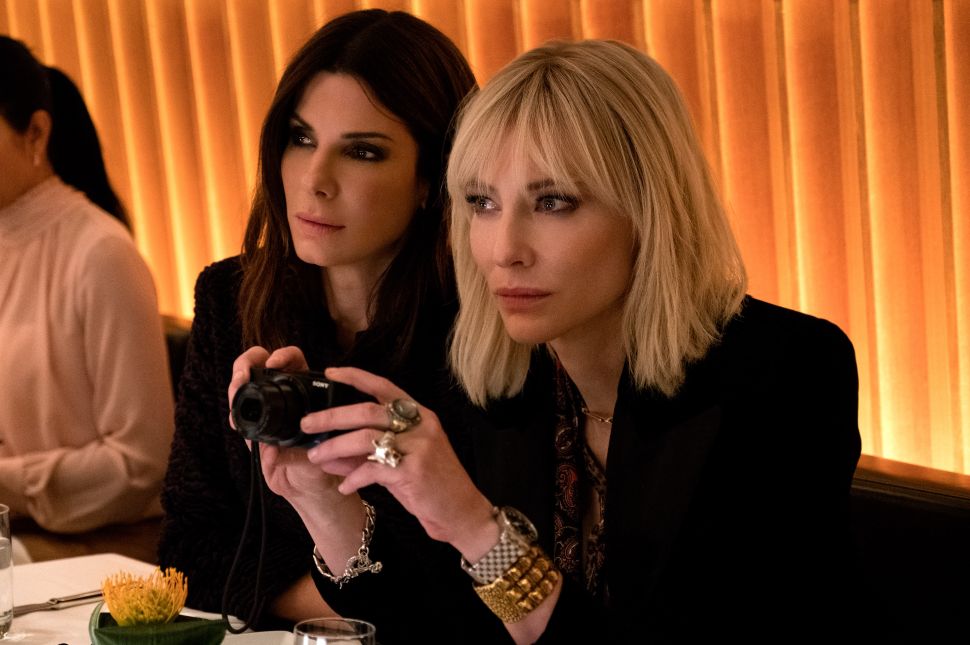