Ambient sound propels you through New York City. The persistent, daily thrum of so much noise quickly becomes background music—even inaudible, with our brains tricking us into drowning it out. On a recent morning in City Hall Park, one could identify a number of things contributing to the clamor: a jackhammer, the downshift of a truck’s gears, crying babies, the cascade of the park’s fountain. And then overtaking it all, something rarely heard in the cacophony of the city: the usually quiet murmurs of human breathing.

These breaths, amplified to unavoidably noticeable decibels, make up the sound installation Out of Thin Air by Brooklyn-based artist Sari Carel, which was commissioned by More Art and premiered at City Hall Park on Thursday, where it will remain until July 8. On the lampposts of the park’s central pathway, Carel has situated speakers that each play the breathing noises of one of 24 individual New Yorkers, whom she recruited through a series of workshops held over the winter for those living with asthma, emphysema and other lung conditions.

In organizing these workshops, Carel collaborated with Jessica Wolf, founder of Jessica Wolf’s Art of Breathing and a professor at Yale School of Drama, and Kerry Pompeo, a specialized recording engineer. Participants were introduced to Wolf’s eponymous breathing method, which highlights respiration as the central balancing system of the body. Through this practice, together with lessons in the Alexander Technique, which retrains one’s body in poor movement and posture habits, attendees who struggle just to breathe learned strategies for improving their physical and emotional well-being. Throughout the run of the installation, Carel has planned a roster of public programming, including blindfold-optional guided sound walks through the park. Breathing workshops and an environmental justice tour of the Bronx, led by members of the grassroots organization South Bronx Unite, are also on the roster.

Carel’s installation calls out the reality of breathing difficulties—which are often overlooked as a critical health issue—with a sincere desire to improve what is unwell. The recorded breaths are by turns arresting, surprising and sometimes upsetting. One hot, harsh breath conjures in the imagination what a fire-breathing dragon might sound like, while another speaker emits a rhythmic wheeze that suggests a medical ventilator. Still another, an insistent twang, grows evermore frantic, the listener able to feel almost tangibly this anonymous person’s struggle simply to draw air into his or her lungs. When the disparate speakers play collectively, the result is a complex braid that forms a canopy of sound, and is impossible to ignore. Nearly everyone that passed down the path that morning momentarily stopped, ceasing their conversations or glancing up from their phones to try and comprehend the alien symphony.

Such an elementary action, a cornerstone of vitality, breathing is easy to ignore until it becomes a grueling exertion. In New York, where asthma rates are twice the national average, and even higher amongst the city’s minority communities, the gesture is especially potent. Because environmental conditions have improved so much over the last several decades, it is easy for New Yorkers to forget that we still live in a vastly polluted city, where every breath—even those of the healthy majority—contributes to a slight darkening of the lungs.

A listener cannot help but be moved by the breaths Carel has gathered, and stirred by the reaction they garner from passersby. Though it ostensibly carries no political agenda, Out of Thin Air evokes a larger analogy that testifies to the actual strength of the weak when fortified by great numbers. Through collected effort, the haggard, raspy, billowing breaths impel people to stop what they are doing and become aware of what is around them. Seven years ago, just a few blocks away, this sort of allied cooperation existed for a while in Zucotti Park. It’s reemerged in the past year in the form of organized protests and marches throughout the country. Carel’s project not only asks the audience to consider breath as that most basic unit of life, but also what power it has for change when united for shared goals. 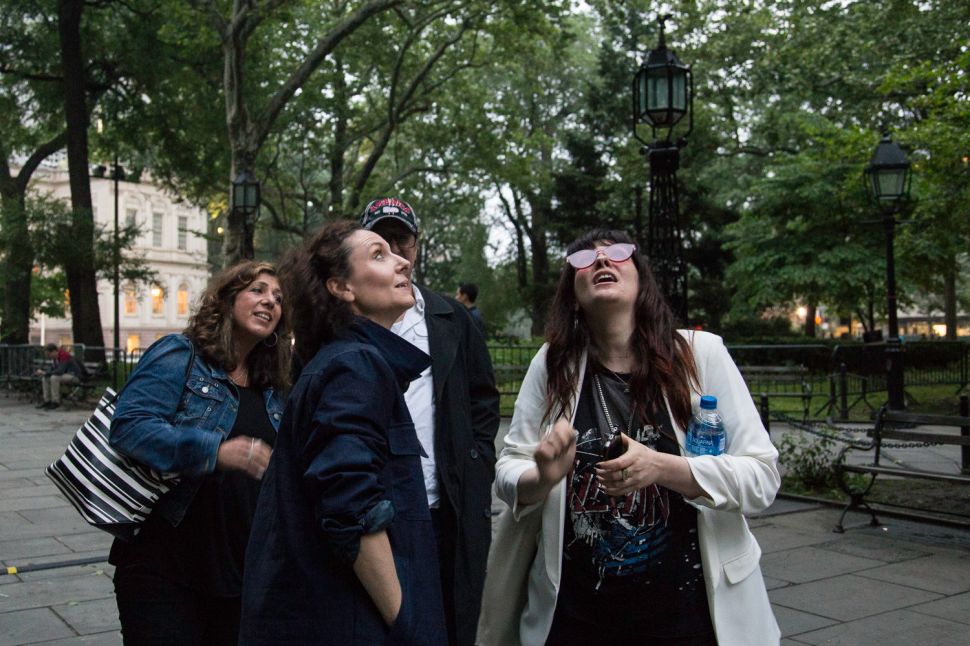