By all accounts, Sicario: Day of the Soldado should not exist. Director Denis Villeneuve‘s (Blade Runner 2049, Arrival) original was one of the best films of 2015 and something of a coming out party for the French Canadian auteur here in America. But the $30 million budgeted picture grossed $85 million worldwide, which is by no means a flop but hardly a moneymaker that demands a follow-up.

In this era of movie making, the primary concern of studios is repetitive cash flow, i.e. sequels and franchises. But with a hard R-rating and content hardly suited for family fun, Sicario was conceived, designed and executed as a tense and brilliant look at America’s failure in the war on drugs.

That doesn’t screams sequel to me.

So how did we arrive here—a time when the mid-budget drama is being squeezed out of existence as every studio searches desperately for the next Avengers—with Sicario: Day of the Soldado opening this weekend?

The original Sicario began generating critical buzz out of the 2015 Cannes Film Festival and mustered a better Rotten Tomatoes score (93 percent) than eventual Best Picture contenders such as Bridge of Spies (91 percent) and The Big Short (88 percent), even though it wound up only being nominated in three craft categories. Critics praised Sicario‘s dark portrayal of immorality used as a weapon against drug cartels, while stars Emily Blunt, Benicio del Toro and Josh Brolin received good reviews and screenwriter Taylor Sheridan’s (Hell or High ) script was earmarked as a highlight.

With a busy schedule that included A Quiet Place and Disney’s upcoming Mary Poppins Returns, Blunt was unable to return for a second go-around (though may be involved in a potential third film). Similarly, Villeneuve is busy working on his Dune reboot. But Sheridan is back with a new script headlined by del Toro, who was arguably the main character of the first film, and Brolin. Sony is distributing domestically and the reviews have been good enough (72 percent), with tracking suggesting the sequel could open between $15 million and $20 million.

Between Avengers: Infinity War, The Incredibles 2 and Jurassic World: Fallen Kingdom, sequels these days are seemingly designed for four quadrant worldwide appeal. Not in all cases, but in many instances, familiarity is being leveraged for business by big studios while originality is considered a risk. Major Hollywood players are looking for valuable IP coated in nostalgia lest they make the “most expensive art house movie in cinema history” which leads to a box office bomb. That doesn’t mean franchise installments can’t ever be creative, but they are far too often safe.

Perhaps then, the reason Sicario: Day of the Soldado exists to alter the paradigm of what a franchise can be. By all accounts, this sequel is unafraid to set up a series with crucial plot points that nod toward a larger story. Outside of the John Wick films, there just aren’t too many movie franchises specifically designed for mature and adult audiences. Going against the grain is inherently risky, but it can also be rewarding—both critically and commercially. Should Sicario: Day of the Soldado earn enough money to justify a third chapter, Sony/Lionsgate could have a modest small risk-small reward franchise on their hands.

And just like that, an original idea not geared toward marketing or sequels may have earned the right to continued life by simply telling an engaging story that under-served audiences connected to. Maybe Hollywood hasn’t been completely consumed by superheroes and giant robots just yet. 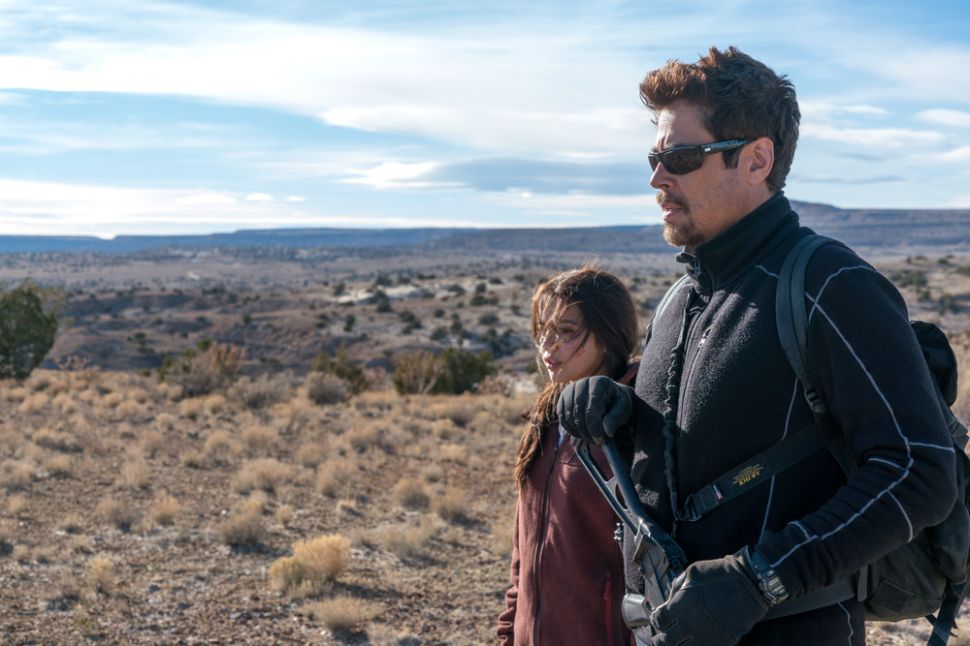