Stephen Miller once again has driven the Trump administration into a septic ditch. But this time, the cobra-headed whip-wielder of the White House is nowhere near a television camera to defend the indefensible and to attack those who dare question the cruelty and the bigotry of the amateur president and his henchmen.

“The president’s power shall not be questioned,” Miller said then as he made the tour of Sunday shows. Despite the opinion of the courts, Miller said, the president’s will shall reign “supreme.”

This spring, Miller’s attack on immigrants at the southern border has led to nearly 2,000 children—mostly Latin-American—being snatched from their jailed parents and warehoused in detention centers. Even First Lady Melania Trump and former First Lady Laura Bush have expressed their reservations.

“This zero tolerance is cruel,” Bush wrote in The Washington Post. “It is immoral.”

While Democratic elected officials stormed immigrant holding pens around the country Sunday, the most prominent White House mouthpiece to defend the administration on the political shows was Kellyanne Conway, a reliable fabulist who spoke a rare truth.

“Nobody likes seeing babies ripped from their mother’s arms,” Conway said on Father’s Day to Chuck Todd on Meet the Press.

Well, perhaps Miller enjoys the sight, documented on video and stills on television, in newspapers, and all over the internet. Like the Muslim ban of 2017, the crackdown on asylum seekers has bared the viciousness of a young man who thrived on race hate as a right-wing, high-school rabble-rouser in liberal Santa Monica.

To The New York Times, Miller bragged, “It was a simple decision by the administration to have a zero tolerance policy for illegal entry, period. The message is that no one is exempt from immigration law.”

The optics are worse than they were when people in Islamic garb were hassled at airports last year. This time, babies cry and one despondent dad—so far—committed suicide.

Miller used to work for Jefferson Beauregard Sessions III when Sessions was a senator from backward Alabama. Now, Sessions is the attorney general of the United States with the power to damage people’s lives.

Instead of launching his promised war against marijuana, Sessions eagerly took up Miller’s anti-immigrant crusade and justified it with the blasphemous audacity to quote St. Paul in a New Testament passage often used to justify human slavery in the Dixo-American region that spawned Sessions.

Certainly you can see why Trump likes Miller. Not only does he distill the xenophobia that pumps up Trump’s chanting mobs, but also Miller looks like Roy Cohn, the old hatchet man for Senator Joseph McCarthy during the Red Scare of the 1950s. The venomous Cohn went on to mentor—surprise!—the young Donald Trump.

But the TV cameras really don’t like Miller. They show him as he really is. In a televised press room tirade in August 2017, Miller expressed disdain for the words at the base of the Statue of Liberty about “Give me your tired, your poor, your huddled masses.”

Miller minimized those immigrant-welcoming words. They weren’t part of the original statue, he said. They’ve only been there since 1903. So there, CNN’s Jim Acosta. Take that.

And when Miller showed up on Jake Tapper’s State of the Union on CNN in January, he threw a temper tantrum that included a 97-second burst of words. He called Tapper “condescending” and “snide” until Tapper turned away from him and continued with other segments of his show.

Any normal administration, of course, would send out a policy-maker like Miller to explain a fiasco that shames the nation. But if they let Miller out of his cage again, he might provoke even more revulsion from timid Republicans, Fox News hosts and first ladies. Nice fix, huh? 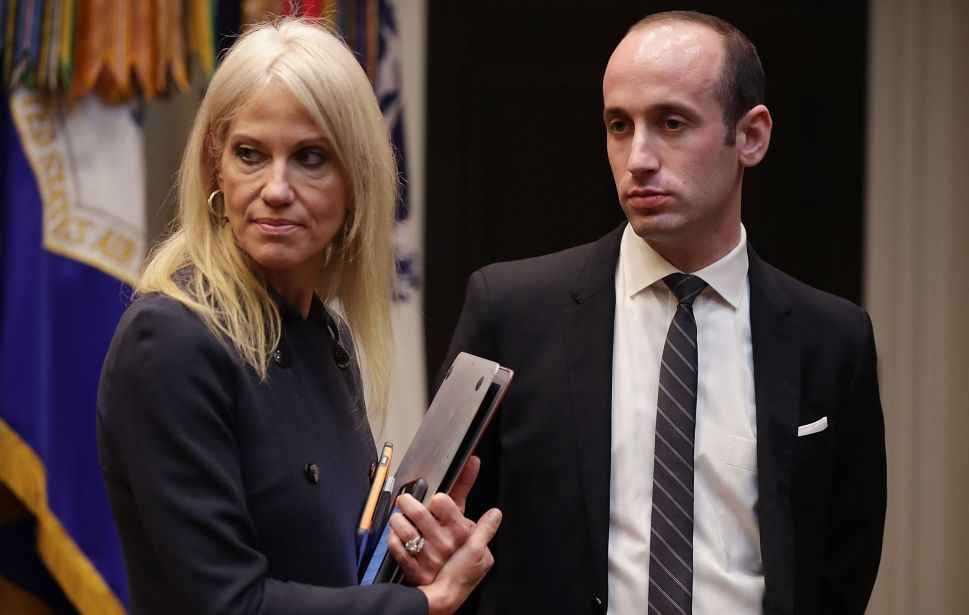