This was the week that President Donald Trump finally went too far. Our transgressor-in-chief overdid it, as was bound to happen eventually. His hardline on immigration, which did so much to get him elected two years ago, galvanizing voters while horrifying elites, blew up in the president’s face when images went public of migrant children separated from their parents by U.S. Immigration and Customs Enforcement.

The images were heart-wrenching, depicting little kids—many on the run from El Salvador, one of the world’s most violent societies—detained apart from their parents while their refugee claims are adjudicated by ICE. This was part of Trump’s promised “get tough” approach to enforcing our southern border, but separating more than 2,000 children from their parents turned out to be more than many Republicans bargained for.

Images of kids in cages went viral with celerity, egged on by nonstop media coverage. Some of that coverage bordered on the hysterical, and Trump seems to finally pushed too far. But there’s every reason to think that, yet again, the seasoned media-manipulator in the Oval Office manufactured a crisis to distract journalists from things Trump would rather not see on the front pages.

For instance, the remanding of his campaign manager and longtime friend Paul Manafort to custody for witness tampering. Or the New York Attorney General going public with legal action against the Trump Foundation, the president’s fake “charity” that for three decades seems to have gone out of its way to violate every tax law imaginable. This is to say nothing of the stunning admission of Roger Stone and Michael Caputo, two longtime Trump flunkies, regarding their May 2016 meeting with a mysterious Russian who wanted to sell them dirt on Hillary Clinton—something that both men lied about in their congressional testimony. All these stories disappeared from the headlines once Trump’s border drama went viral.

For ugly they were. Removing minor children from their asylum-seeking parents is beneath our country, not something civilized people do in the 21st century, as even most Republicans realized. By mid-week the president’s position was untenable, and in a rare reversal, Trump blinked. With an executive order, the president ended the family separation policy. For a man who relishes never backing down, to anyone on anything, this constitutes a significant setback.

This is a tactical debacle for the White House, but Democrats would be unwise to view this as a strategic defeat for the president just yet. A hard line on migration, after all, is Trump’s signature issue and—his childish fantasies about “the wall” and awful images aside—a lot of Americans are happy to see the president trying to enforce our immigration laws, even if stupidly. The Democrats have a golden opportunity to triangulate against Trump on immigration, since there are plenty of Republicans in Congress right now who are eager to distance themselves from the White House and its dismal family separation policy, but so far there’s no sign that they will do so.

Indeed, liberals are so fired up over Trump’s kids-in-cages disaster that many of them see no reason to compromise with Republicans at all. Even mainstream liberal commentators have compared the president’s actions this week with the Nazis. To many on the Left, including battalions of celebrities, it is now self-evident that Trump is a Nazi, de facto if not yet de jure, and how could anyone compromise with Nazis or the Republicans in Congress who enable said Nazis?

Many have detected the sinister hand of Stephen Miller behind the kids-in-cages episode, given Miller’s hard line on immigration and his all-purpose role as the White House’s nefarious staffer of choice since his mentor Steve Bannon was booted from the West Wing nearly a year ago. Vanity Fair this week cited an anonymous White House staffer who chided Miller as “A twisted guy… he’s Waffen-SS,” meaning the Nazi’s elite paramilitary arm. Which is odd, since Miller is Jewish and an SS Jew, like a Black Klansman, is simply not a thing. Indeed, it’s a non sequitur.

There’s little doubt that Miller is a white nationalist of some sort, but a Nazi he certainly is not. He may have something in common with right-wing Zionists in Israel, who have eagerly kept migrants out so to maintain the country’s current ethnic balance—something that provokes massive Western media outrage when Hungary’s Viktor Orbán does it, rather less so when Bibi Netanyahu does. Netanyahu’s government, which is the only close American ally that Trump has not attacked for no reason, built a wall to keep migrants out (in a country as small as Israel, it’s worked). That policy was explained by Israel’s interior minister with the statement that the migrants, most of them Africans, “do not even believe that this country belongs to us, to the white man.”

The notion that there are people who want to maintain an existing ethnic balance who are not Nazis seems to be unthinkable to liberal commentators, however, so Nazi is the preferred put-down. However, evidence that Trump is a Nazi can be charitably termed thin. He is alleged to have kept a book of some of Hitler’s speeches by his bedside. His alarming even-handedness regarding the far-right rally in Charlottesville, Va. last August, where some of the marchers were doing their best to LARP as Illinois Nazis, was indeed troubling, but it bears noting that the Alt-Right died along with Heather Heyer. Their movement, which barely existed outside the Internet, was crushed by the Charlottesville disaster. Many of their “leaders” have gone to ground, their websites and social media rants deleted, while Matthew Heimbach, the top Nazi LARPer, who planned to establish a white homeland from his Indiana trailer, wound up in a sordid sexual scandal with his in-laws, resulting in his arrest after a trailer park brawl. He just did a month in prison for a parole violation.

If this is Trump’s elite Aryan vanguard, tell Hollywood there’s not much to worry about. The notion that our president has any fixed ideology at all, much less Hitlerian National Socialism—indeed that he cares about much of anything other than himself, his physical satisfaction, and his personal preservation—is laughable. Trump is pure id; there is nothing else to the man. Nazism is an ethos, per Walter Sobchak, and there’s no evidence that our lazy president understands it—or any coherent political worldview—in detail.

To illustrate how absurd liberal Nazi-hunting has become lately, take the case of Justin Gaertner, an ICE computer forensic analyst, who this week was the subject of online attacks by liberal crusaders seeking Nazis to out. A Marine combat veteran who lost both his legs in Afghanistan in 2011, Gaertner is featured in ICE promotional materials for his work with the Human Exploitation Rescue Operative Child-Rescue Corps or HERO, a public-private program that investigates pedophiles.

Last weekend, a wannabe Nazi-hunter, Talia Lavin, saw Gaertner’s photo and declared on Twitter that she had found an actual ICE Nazi. Retweets and social media hysteria followed. Lavin’s “evidence” that Gaertner is a Nazi was a tattoo on his left elbow, which to her looked like the Iron Cross, the infamous “Nazi” valor decoration. Anyone who has ever seen an actual Iron Cross would have noticed immediately that it was not one; Gaertner’s tattoo is in fact a Maltese cross, which is popular with firefighters, and it was used by his Marine platoon in Afghanistan. The tattoo commemorates Gaertner’s fallen comrades and his own significant sacrifices.

ICE came robustly to its employee’s defense, denouncing Lavin for “baselessly slandering” a crippled Marine veteran who works to protect children. But it took days for the social media fury aimed at Gaertner to subside, since left-wing celebrities had jumped in. Ron Perlman, the Hollywood actor, joined the fray by retweeting Gartner’s picture with the comment, “Is that an iron cross tattooed on this hero’s arm? This is a mistake, right? Cuz the Iron Cross was a symbol of Nazi Germany.”

First, the Iron Cross was established by Prussia in 1813—not by Adolf Hitler. It was awarded to Prussian soldiers for 120 years before the Nazis came to power; some 5.5 million Iron Crosses, in both classes, were bestowed on German fighting men in World War I (one of them was Adolf Hitler, but so were 18,000 German Jews in uniform). The medal was disestablished after 1945, when pretty much all of Germany’s military traditions were abandoned due to Nazi taint, but it has been used since 1956 as national insignia by the Bundeswehr, the reborn military established under American auspices for the Cold War.

Not to mention, yet again, that Gaertner’s tattoo was not an Iron Cross at all. This was a completely invented scandal, a case of literal “fake news” that the president is constantly rant-tweeting about. To make this saga perfect from the White House’s viewpoint, Talia Lavin is a Harvard graduate and, incredibly, a fact-checker for the New Yorker; in her spare time, she writes angry columns at The Forward about Trump. Just last week, in an op-ed titled, “No, We Don’t Have To Be Friends With Trump Supporters,” she piquantly explained her technique of dealing with the president’s backers: “Tough nuts, sugar. When they go low, stomp them on the head.”

The New Yorker eventually got around to apologizing to Justin Gaertner, and as of yesterday Talia Lavin is no longer employed there, since her fact-checking skills are clearly lacking. Her Twitter feed remains angrily unrepentant, maintaining that she is the real victim here. If the Republicans wanted to ape the president’s Kremlin friends, secretly backing nutty leftists to fire up the GOP base as November midterms approach, they could find few people more calculated to offend Red State Americans than Talia Lavin.

Outside deep-blue coastal enclaves, the contest between a crippled veteran who helps track down pedophiles and an angry Ivy Leaguer who hunts for imaginary Nazis isn’t a tough one to predict. Which is why Donald Trump, despite being the worst president in our history, a deeply flawed human being and hopelessly inept leader, to say nothing of his being under increasingly serious investigation for his secret ties to Russia, should not be counted out just yet. If Americans are given only two choices—Liberals or People Liberals Say Are Nazis—don’t be surprised when they don’t choose how left-wing elites want them to. 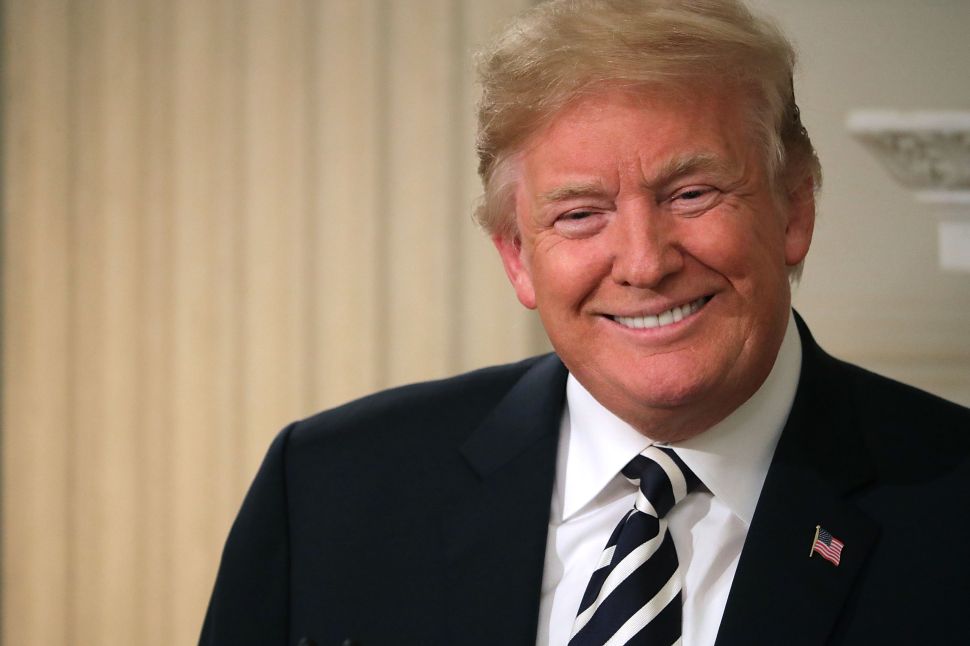