The characters in George Orwell’s classic 1984 fear Big Brother, a fictional dictator who watches their every move and denies them privacy. In spite of this, citizens constantly praise and thank him for protecting them.

We may not live in that dystopia, but plenty of people in the modern world exert outsize influence and attract a slavish group of followers.

Exhibit A of this phenomenon is Elon Musk. And this week, he proved that his followers have fully drunk the Kool-Aid.

In a move straight out of 1984, workers who Musk laid off from Tesla earlier this week are publicly praising him on social media,

Musk revealed in a tweet Tuesday that Tesla would fire nine percent of its workforce in the coming days. The move will impact about 3,000 salaried employees.

The layoffs will not affect any employees on the production floor, so Tesla’s Model 3 is still on track to meet targets (we’ll see how long that lasts).

You might expect the workers who lost their jobs to be bitter at the company or angry with Musk, but in fact the opposite is true: they’re effusively thanking the tech titan, and their friends are too.

I was laid off from Tesla yesterday and although it hurts (a lot!), it is the right thing for the company. I don’t regret giving all I had and in a way bidding adieu is my last contribution. I’ll be cheering Tesla on knowing I did my part. Thanks for the years of memories!

Thanks for the opportunity, Elon! Eye on the mission. Will always be proud to say I worked for Tesla.

I know a regional manager that was let go that I respect and appreciate his hard work and dedication but also respect your goal as CEO & chairman. Must have been very tough call to make.

Members of the media and other commentators immediately noticed the Orwellian quality of these tweets. They also encouraged fired workers to help Tesla’s competition, Whole Foods-style.

"He gazed up at the enormous face. Forty years it had taken him to learn… But it was all right, everything was all right, the struggle was finished. He had won the victory over himself. He loved Big Brother."https://t.co/eZYcB6OmGi

Don’t be so happy to be fired. Go sell the secret formula to slugworth. pic.twitter.com/TmbEpHek8Z

Some brave souls swooped in to criticize Musk about his handling of the firings.

Everyone is commenting on how transparent you were. You know who didn’t know? My husband who was at work for Tesla today. I saw it on Twitter while he was on a conference call with tons of people who were given no new opportunity 2 hours before the end of their day.

But of course, Musk apologists stepped up to to defend their hero.

Layoffs suck. I’ve been on both ends — been laid off, had to lay off. I wish him the best in finding something new. And I’d suggest you don’t burn bridges for him. Just having Tesla on your resume is impressive, let alone the experience he must have gained from it. (2/2)

Musk’s army of online yes-men has often been referred to as a cult that zealously protects its greatest asset.

“You could call Musk the Kanye West of the tech world,” a 2017 TechRepublic analysis read. “Theatrical, arrogant and by some measures, genius.”

Cases like this show exactly how true that is. The business magnate’s acolytes can’t bear to hear a word against their Dear Leader.

But even Musk’s most die-hard devotees might have a problem with his post-layoff stunt.

On Tuesday and Wednesday, right after Musk announced the job cuts, he bought over 70,000 new shares of Tesla stock. The shares are worth about $25 million, according to Marketplace.

This could be a strategic move, as Business Insider pointed out. Musk has been known to double down on his investment in Tesla at times when the company is struggling, to show he still has faith in it.

But the fact Musk is lining his pockets after firing 3,000 people—and workers are still praising him in spite of that—is pretty Orwellian.

Tesla did not respond to an Observer request for comment. 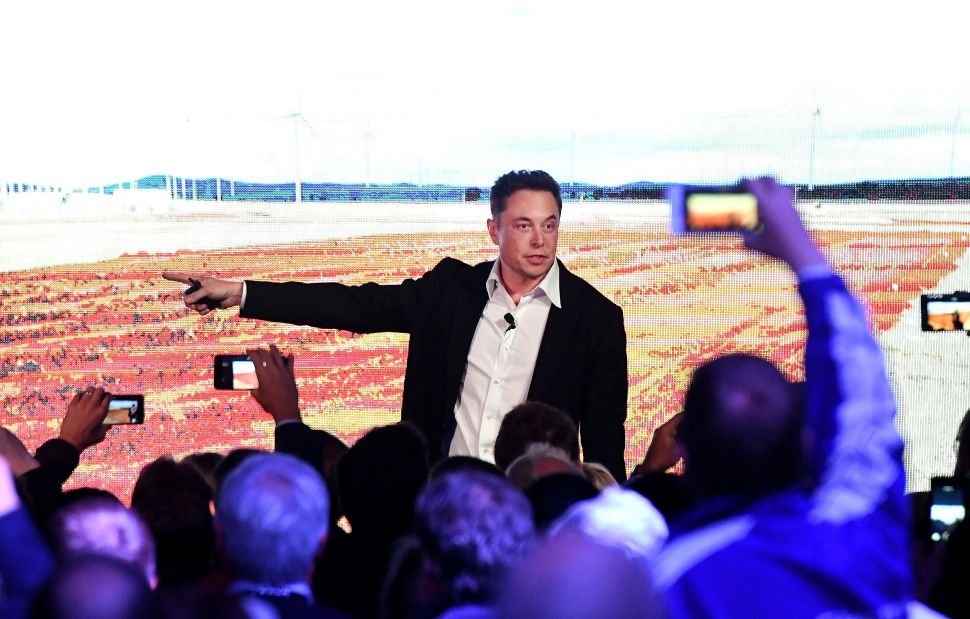