The Gorgeous Ladies of Wrestling are back for Season 2 of GLOW on Netflix, with more do-it-yourself costume and makeup charm. Set in mid-’80s Los Angeles, the first season ended with a moment of triumph: shooting the pilot episode of their basic cable series. Now, the women wrestlers are trying to make it big, dealing with their newfound fame and all the perils of the industry (ahem, the male perils of the industry) along the way.

When Observer spoke to GLOW costume designer Beth Morgan and makeup artist Lana Horochowski about the looks for this season, the keyword was DIY. “We keep throwing around the word ‘homemade’ to remind ourselves they did it themselves,” explained Horochowski. Their mantra: “take it down a little bit. Make it less perfect,” Horochowski said.

“Our girls don’t have a ton of money,” agreed Morgan. “They repeat a lot of their casual looks; they wear a lot of the same workout looks.” So don’t expect an entirely new roster of wrestling costumes. But do expect to see clothing items reappear in new, inventive and outrageous ways. Here are some of the duo’s favorite looks from Season 2.

Costume Designer, Beth Morgan: Ruth, in general, is about functionality; even her everyday style is very utilitarian. On-screen, in Season 1, Ruth [was the one who] did the most research for making her costume. She found this great wool coat in a thrift store or at the Army Navy Surplus and put the sickle on it. She wanted it to be as accurate as possible.

BM: Zoya’s costume is the one that is the most fragile, in the sense that it is a coated spandex. When she rubs against herself it can get worn. We have a significant amount of multiples of those for that reason, so we can keep it consistent. But we don’t have as many multiples as you would think because the girls do their own stunts. They’re truly badasses. Very rarely is there ever a stunt double.

BM: Debbie’s outfit was originally designed with an American flag skirt—an oversized American flag. But then in the Season 1 finale Debbie had a storyline where she was sitting in the audience. The writers knew how passionate I felt about that look, but again it is [meant to be] homemade—we have to believe the reality of this happening for our girls. So this skirt is actually part of a skirt that Debbie buys at the mall for a dinner in the first episode of Season 2. We cut the pencil skirt from underneath it and hand-pinned an American flag to it for the special match that her and Tammé do.

Makeup Artist, Lana Horochowski: She has a crazy American flag glitter fade on her eyes—dark blue to bright blue to white to red. That one takes a long time. And glitter lip on top of it.

BM: The beauty for me, story-wise, in GLOW, is how it puts a lens on these stereotypes that still exist. When these girls come on-screen in this stereotypically racist outfit and persona…how did that innately make you feel when you first see it? What does that say about how you still see the world? That’s what one of the important things about using the stereotypes in GLOW. I think about the modern audience and how they will relate to that. What will they first think when they view these characters? [This] was really important when we were putting the looks together.

LH: When the women are in the ring, we want the makeup to start to fall off and the glitter to drip, separate and sweat off. It adds to the comedy of it too. You see Liberty Bell and her blue glitter is streaking down her face. It helps her. It is real. It is what would happen.

BM: This is a homemade version of a homemade look. We built this fur shirt from a wife-beater; old fur coats and old fur pillows. Things you would find around the house. Sheila’s look is really curated for her. It is not quite finished, she is always a work in progress. We spent the most time on her in prep, as collaborators, figuring out what that look would be.

LH: [Shelia’s makeup] took the longest to design and to get right. I know we had several run-throughs of it; it evolved before we started shooting. It turned out to be pretty simple.

BM: Yolanda comes into replace the position that Cherry left. A new person coming in can feel strange, and Yolanda has a kind of confidence that not a lot of our girls have. She was a really interesting one to research. Her overall look is really fun. [In this shot] it’s new Junkchain versus old Junkchain. Yolanda has a breakdancing background, so you’ll see in this photo she has these glitter knee pads—more of an Electric Boogaloo feel.

LH: There was an overall feel that the girls were a little resistant to Yolanda at first, so she didn’t get the glitter makeover that everyone else did. No one really wanted to help her out.

BM: Melanie comes from money. I think that her wrestling costume is the most flashy because she called up daddy. She needs to be a little bit extra compared to the other girls. She goes out and she is on the scene more—knows what’s relevant in a different way than our girls.

Ruth and Melrose both have belts that are made soft for safety. Ruth’s belt we have a metal version for when she isn’t in the ring and a soft plastic version when she is in the ring. These girls would wear these accessories. We keep that real for them. Especially for Melrose, she is all about her accessories. She also has fishnet bedazzled gloves that she wears for the extra sparkle. That’s her hero earring.

BM: The pride you feel when you see Tammé in that sweatshirt…there’s the amazing pride of a mother who helped a son along.

BM: This one is one of my favorite leotards for Cherry. It is made of pantyhose material so it is really sheer and fits perfectly. She often wears shorts or rompers; when she is in the leotards next to the other girls, it shows the difference in the time period because she leans very ‘70s.

This sweatsuit for Britney we made and dyed. Carmen’s clothes are based off the children’s section in the J.C. Penney catalogue because she is so adolescent still and innocent. Her color palette is really naive and innocent, so we keep her in these soft pastels.

BM: That two shot [polo shirt] is a joke. They are in prep for the series…preparation, that’s what we call it when you’re prepping the show. So Sam calls and he says, “We’re going to start prep.” Bash shows up: “oh I thought prep meant we’re going to dress preppy.” He doesn’t understand. What does he think preppy is? Of course he takes it to the next level with the double collar.

Sam’s look doesn’t change. He is like your dad that wore the same look for 20 years. He has these shirts—as long as they don’t have a hole in them he’ll keep wearing them. He wears cowboy boots and his jeans. He repeats a lot.

BM: Costume wise, Bash has the most disposable income of anybody, so he is the height of fashion, for me. This green suit for Chris is one of my favorites. It is a sharkskin print, made of a completely unnatural fiber. I don’t even know what this fabric could possibly be; it can stand up on its own. Some of those vintage gems you find [are] just so right for his character because he takes fashion risks and is really ballsy when it comes to his outfits.

BM: [In] any morning scene, a lot of the ladies are in the same look. That, to me, is the familiarity and realness that people relate to in GLOW. I wear the same pajamas, I wear the same pair of jeans probably four times a week.

These are all found vintage pieces. We didn’t make anything there, they are all amazing found pieces. In this scene, I don’t know if anybody has makeup on, which I think is such a special thing that you [Lana] do.

LH: Nobody has makeup on except, obviously, for Sheila, which I always think is so funny. It helps with establishing “after they’ve been fighting.” [When] they’re in a match, they’ve got all this crazy stuff on. Then you see them completely stripped down: young girls trying to make it in this town.

GLOW is available to watch on Netflix now. 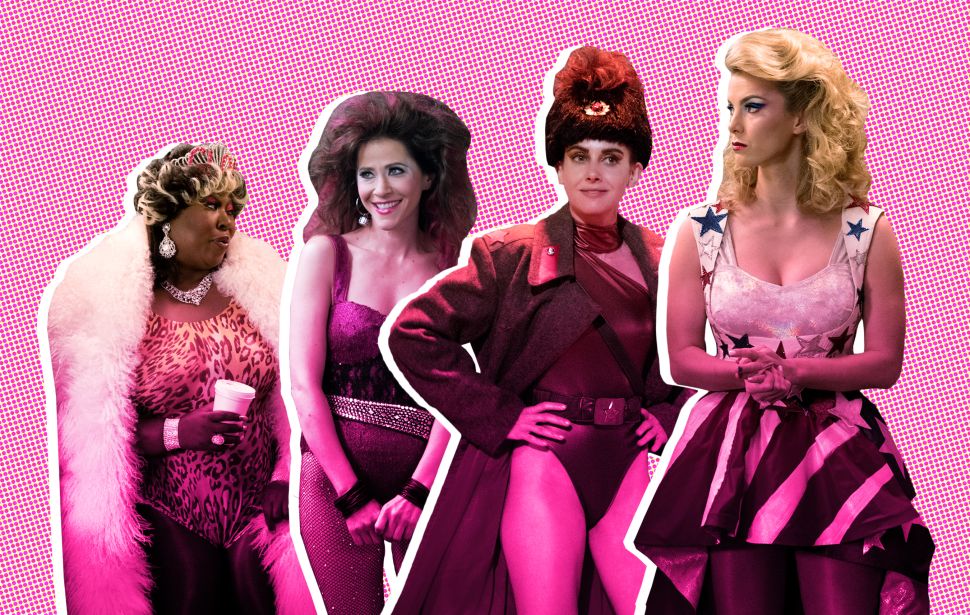