There were times this season when Broadway looked more like a multiplex than a mecca for live theater.

With shows like Frozen, Mean Girls and SpongeBob SquarePants clogging the Great White Way, it seemed like there were barely any original ideas left.

But a few gems still emerged from the pack—and luckily, it looks like those more innovative works will take the top prizes at this Sunday’s Tony Awards.

Read on for our predictions and analysis ahead of Broadway’s biggest night.

All four of this year’s nominees are based on movies or TV shows, but only one of those shows broke away from that format and created (to quote one of its songs) “something different.” The Band’s Visit will ride a wave of rave reviews to claim Tony’s top prize.

Cursed Child won’t need a magic wand to conjure up this trophy. It’s the biggest hit of the Broadway season, and got as many nominations as all four of its rivals combined. So the producers better be prepared to catch the Snitch.

Best Revival of a Musical

Carousel
My Fair Lady
Once on This Island

Of the top four categories, this is the toughest—all three productions got rave reviews and a boatload of nominations. But we’re giving a slight edge to the Lerner & Loewe classic, which was reimagined for the age of #MeToo.

Best Revival of a Play

This was a stellar year for play revivals—several of these productions richly deserve the statue. But Tony Kushner’s epic masterpiece will take the prize, thanks to its scope (seven hours and two plays), rave reviews and continued relevance.

Best Leading Actor in a Musical

This category is a true toss-up showcasing many different kinds of acting, from Slater’s hilarious mugging to Shalhoub’s quietly devastating emotion. But Henry’s “Soliloquy” in Carousel was one of the most devastating numbers performed on Broadway this year and should be enough to push him over the top.

Best Leading Actor in a Play


After cruelly losing the trophy for Death of a Salesman in 2012, Garfield will finally win for his harrowing work as Prior Walter in Angels.

Best Leading Actress in a Musical

The year’s busiest acting category only has one clear winner. Lenk is hilarious and heartbreaking as cafe owner Dina, especially during her marquee number “Omar Sharif.” Ambrose got rave review as Eliza Doolittle, but it won’t be enough to prevail this year.

Best Leading Actress in a Play

There’s really no contest here. Jackson returned to the stage in grand fashion after two decades in Parliament, making Edward Albee’s classic soar anew. The other three women represent the sole nominees from their shows, so they’ll all go home empty-handed.

Best Featured Actor in a Musical

Here’s where things get really difficult. Butz got rave reviews, but he’s already got two Tonys so voters may think enough is enough. Lee is an entertaining Squidward, but SpongeBob is more renowned as a technical achievement, than an acting or singing showcase. Henson is hilarious as “too gay to function” Damian, but his show loses points for too much tap (it’s a thing).

We’re giving the slightest of edges to Stachel, whose Band’s Visit character exudes charisma. His trademark pickup line “Do you like Chet Baker?” and soulful “song about love” are show highlights, and he’s also been praised for advancing Middle Eastern culture through his work in the show.

Best Featured Actress in a Musical

This category is a head-scratcher for the opposite reason: None of these women received especially good reviews, so it’s hard to figure out how voters will favor one over another. Mendez gets a small advantage for her appealing work as Carousel‘s ingenue, but her veteran co-star Fleming could also easily triumph.

Best Featured Actor in a Play

No suspense here: Broadway favorite Lane will win his third Tony Award (and first for a play) as the blustery Roy Cohn in Angels.

Best Featured Actress in a Play

This is really a two-woman race: Gough won an Olivier Award (the British Tony) for Angels in London. But she wasn’t competing against a co-star as she is here; that’s always a distinct disadvantage because they split the vote.

So we’re giving the edge to Metcalf, whose moving, hilarious performance was one of Three Tall Women‘s many pleasures. She was also pretty much the only person to emerge from the recent Roseanne controversy unscathed.

Best Director of a Musical

Landau made SpongeBob a splashy extravaganza, so voters who might not pick the show for Best Musical could reward it here. But in recent years, this award has skewed more toward smaller, inventively staged shows—so we’re giving Cromer the advantage.

Best Director of a Play

Angels and Cursed Child were both herculean efforts, so this category is close to a draw. But Elliott just won three years ago, while it’s been a six-year drought for Tiffany—so he gets the edge.

David Yazbek’s beautiful music and lyrics are filled with Middle Eastern flair and will easily win him this trophy.

Best Book of a Musical

This is the one category where Tony will throw Mean Girls a bone. Tina Fey’s hilarious book is easily the best part of the show, and she’s been campaigning for the prize like mad. We love Band’s Visit, but even we admit this is Fey’s to win.

What Else to Expect on Tony Night 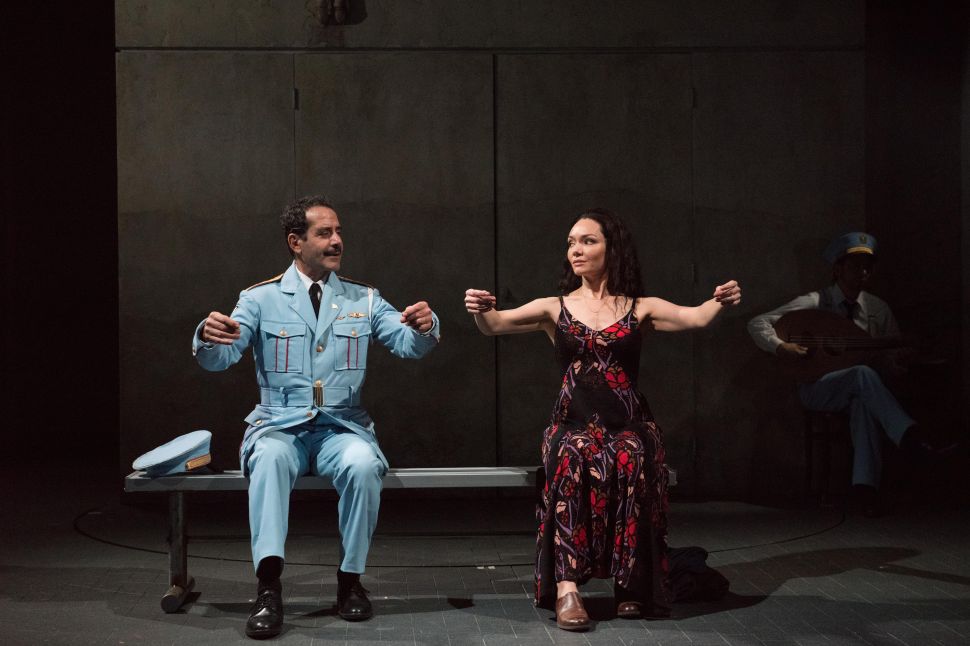