There are bad movies everywhere. And then there is 97 minutes of total garbage called Hotel Artemis. This shoddy, gross, cruel and nauseating freak show is the work of Drew Pearce, a writer of no discernible talent (Iron Men 3, Mission Impossible—Rogue Nation), making an atrocious directing debut. Moronic drivel that truly qualifies as the worst movie of the year, it sinks amateurish moviemaking aimed at audiences with no taste to an alarming new low.

A creepy combo of science fiction and bloody, slashing carnage, it’s set, for some unexplained reason, in 2028—on one busy night in a futuristic Los Angeles reduced to a pile of rubble and corpses, where the citizens are rioting and killing each other over the dwindling supply. In a world of almost terminal darkness where a flashlight could lead to sudden death, the Hotel Artemis is a deserted building that serves as a Grand Guignol horror show. In this fetid, members-only stinkhole (numerous references are made to the way it smells), wounded outlaws come to be treated for knife slashings, gunshots and worse, in an emergency room for criminals run by an ancient hag called The Nurse, played by none other than—wait for it!—Jodie Foster.

Disfigured with prosthetics, crone makeup and wrinkles for days, this resourceful, intelligent actress looks 104 years old and does everything in her power to avoid trashing her considerable talent in a role that can only be described as stupid and meaningless. Either she’s doing somebody a favor or she needed money badly. Whatever the reason for insulting her admirers, this junk movie isn’t worth it.

Wielding hypodermic needles and barbaric instruments of torture, The Nurse administers triage to an assortment of deranged killers, bank robbers and gang members who have reduced the outside world to an abattoir of severed limbs and rotting bandages. Helicopters explode overhead, generators are noisily re-wired, the sky outside the windows looks like a lava flow in Guatemala, and the sound of machine guns make conversation an impossible task, but inside the Hotel Artemis, if you are a member of this private club, you can hide out for a while and get some medical treatment, as long as you’re not a cop or member of government authority—and they don’t run out of opiates. In a film of endless enigmas, the biggest mystery of all is what Jodie Foster is doing in it.

The idiotic screenplay insists a world revolution is in progress with the poor declaring war on the rich. There are good guys and bad guys, but nobody bothers to explain who is who, what is what, or why.

The Nurse, hooked on pain killers and whiskey, greets a rogue’s gallery of creeps from Central Casting including “The Wolf King” (a.k.a. Niagara), a master fiend who rules L.A. (a silly performance by a miscast Jeff Goldblum); a band of thugs led by his menacing son (a one-dimensional Zachary Quinto); a Neanderthal health-care professional named after Mt. Everest (Dave Bautista); a bank robber named Waikiki (Sterling K. Brown) and his drug-addicted kid brother Honolulu (Brian Tyree Henry); a scumbag businessman named Acapulco; and Nice, (referring to the town in the South of France, not a pleasing personality trait) a karate-chopping lady assassin in a red evening dress (played by the dreadful Sofia Boutella, who can barely speak a word of intelligible English).

The rest of the cast performs with such a uniformly sluggish ineptitude that it is an act of generosity not to mention their names.

Drew Pearce’s direction is a real slog. His alleged script, which borrows and steals from every action cliche imaginable, makes so little sense it might as well be written in Swahili. A subplot about a diamond hidden in a fountain pen is so lame it must be a joke. Like everything else, it backfires. I laughed more at the sight of Foster escaping to her sordid room for endless replays of The Mama & The Papas singing “California Dreamin'” But the biggest laugh in the movie is the only real laugh in Hotel Artemis, when she gets so tired of the mayhem and shootouts and falling cadavers that she sighs a big one and threatens to put up a “No Vacancy” sign. It’s too late. Everyone else has already checked out early. 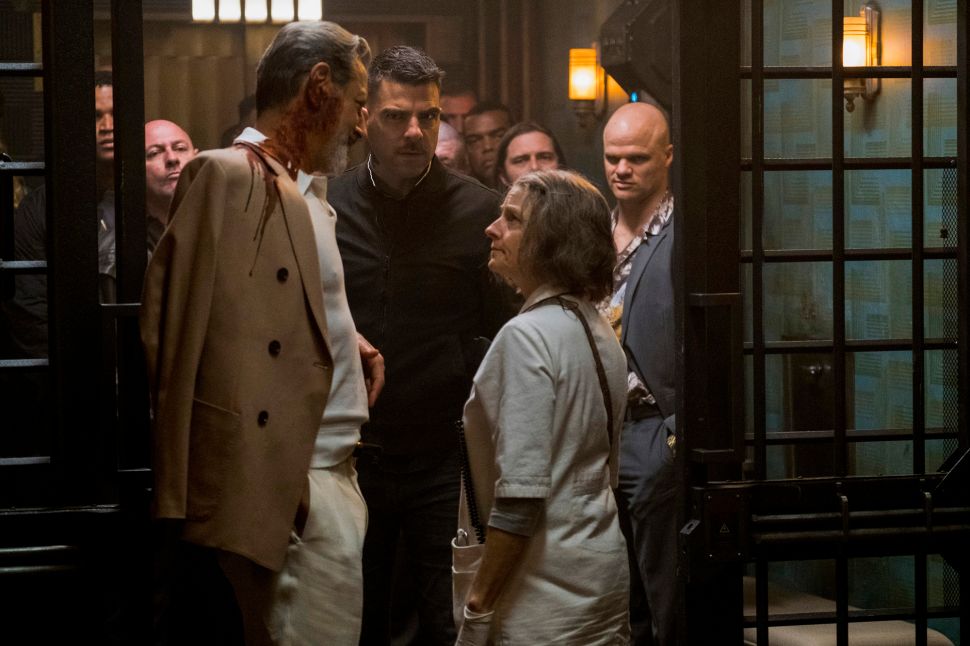