President Trump announced the creation of a sixth military branch known as “Space Force” amid controversy over his administration’s handling of immigration.

“We must have American dominance in space. Very importantly, I am hereby directing the Department of Defense and Pentagon to immediately begin the process necessary to establish a Space Force as the Sixth Branch of the Armed Forces,” the president told reporters on Monday.

Although the president’s announcement surprised reporters, Trump had teased the creation of the branch in past speeches. In May, while addressing the West Point football team, Trump told players the U.S. was “getting very big in space, both militarily for other reasons” and that his administration was “seriously thinking of [creating] the Space Force.

Trump also remarked to California military members in March that “space is a war-fighting domain, just like the land, air and sea…We may even have a space force.”

“I am thrilled that the Space Corps idea is gaining traction at the White House. Congressman Jim Cooper (D-TN) and I have worked tirelessly on the House Armed Services Committee (HASC) Strategic Forces subcommittee level on the need for a Space Corps outside of the Air Force for over two years now,” Rogers told CNN.”Russia and China are surpassing us in Space capabilities and we need to dedicate a separate force solely with a Space mission. The future of war will be fought in Space, and we must stay diligent and ahead of other countries for our own national security.”

In the back of the room, White House aide Steve Miller—who is seen by many as a hawk on immigration—was spotted by reporters inspecting the teleprompter Trump read from.

“The United States will not be a migrant camp and it will not be a refugee holding facility,” said the president before announcing Space Force. 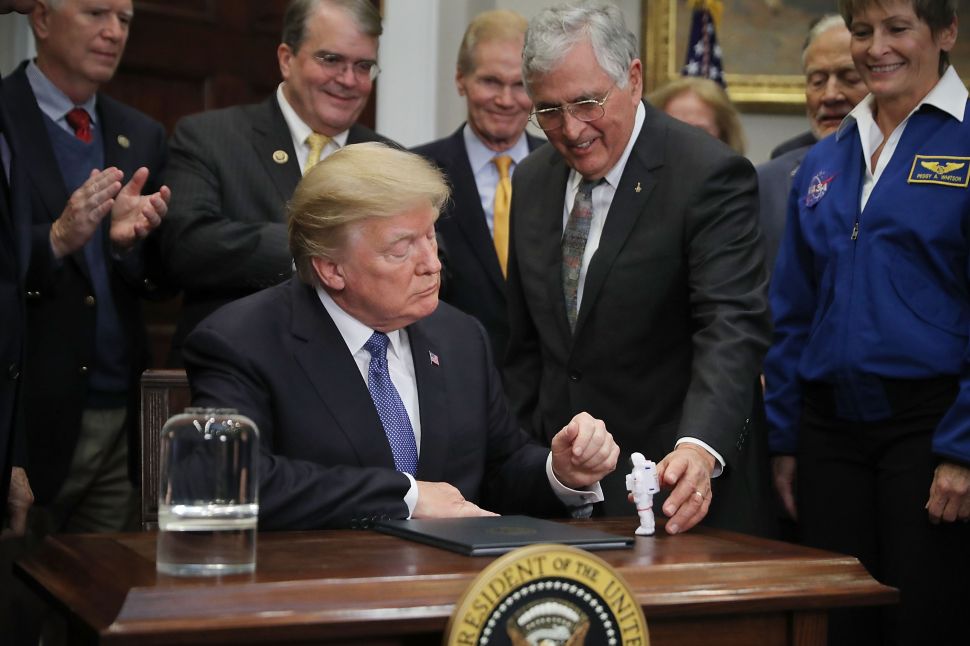