What in the name of God? As a scholar of religion, I ask this question for a living. Yet I seem to be asking it with greater frequency as evangelicals, in particular, remain President Donald Trump’s loyal base despite the dissonance between their stated historical commitment to “traditional family values” and his apparent lack of them.

I found myself asking this question again when Attorney General Jeff Sessions cited the Bible to defend the Trump administration’s policy of separating immigrant children from their families at the border. Sessions said, “I would cite you to the Apostle Paul…to obey the laws of the government because God has ordained them for the purpose of order…to protect the weak and lawful.” Just a tip for Sessions, Paul might not be the guy to use as a model example of a law-abiding citizen, given that he was imprisoned several times (during which time some of his letters in the Bible were penned) and ultimately executed.

That aside, Sessions’ use of Romans 13 to bolster the administration’s enforcement of a “zero-tolerance policy” toward immigrants gave Trump’s base what they want: a biblical justification for political policies they support. And who can blame them? It’s nice to get a stamp of approval from the big guy upstairs.

Trouble is, people can use the Bible to justify pretty much anything, and indeed Americans have been doing it for centuries. When you have a text compiled of dozens of books and letters, written over several centuries by many authors from various cultures, countries, and contexts, there are—not surprisingly—a multitude of ideas represented. What results for the reader can best be described as: pick an ideology, any ideology!

While all political policy is complicated, the images and audio of the children in the detention facilities inspire a visceral reaction, particularly among liberals who see the centers as an example of children (of color) being treated inhumanely. But perhaps most of all, the implementation of this policy and its potentially traumatic consequences for children appears incongruous with conservatives’ pro-life position and their proclamations that “all lives matter,” both of which many connect to their Christian faith. It is the hypocrisy, not the religiosity, that is most infuriating.

Despite being the central character in Christianity, Jesus tends to get muted during these debates, but if there’s one thing Jesus consistently called out and rebuked, it was hypocrites. The leaders of the Jewish communities, Pharisees and Sadducees, were frequent targets of Jesus’s ire. It might behoove Sessions to peruse Matthew 23 to get the scoop on what Jesus has to say about hypocrisy. Speaking to his disciples, Jesus says, “So you must be careful to do everything [the teachers of the law] tell you. But do not do what they do, for they do not practice what they preach. They tie up heavy, cumbersome loads and put them on other people’s shoulders, but they themselves are not willing to lift a finger to move them.”

Indeed, Trump tweeted that “Democrats are the problem,” and at a press conference on Monday, Sarah Huckabee Sanders echoed this claim and put that “heavy cumbersome load” on the Left by calling on congressional Democrats to “fix the laws.” The decision by the Trump administration to implement the zero-tolerance policy is at odds with their pro-life worldview, and their use of the Bible to defend the inhumane treatment of children seems like just the kind of thing that, if Jesus were still around, would inspire another temple tantrum (as I like to call the time Jesus came in hot and flipped the money-changers’ tables in the temple).

And let’s not forget that the nativity story in the the New Testament depicts Jesus as a refugee displaced from his family’s original home. Despite being the narrative upon which Christianity is founded, Jesus’s origin story doesn’t seem to be inspiring conservative policy to assist those in similar political predicament. Essentially, the Trump administration is saying, “There’s no room at the inn.”

Conservatives who tolerate the separation of innocent children from their families and defend it by using a verse from the Bible while claiming every life is valuable serve only to undermine their supposed message of safety and lawfulness. And it makes the rest of us ask, what in the name of God? Literally. 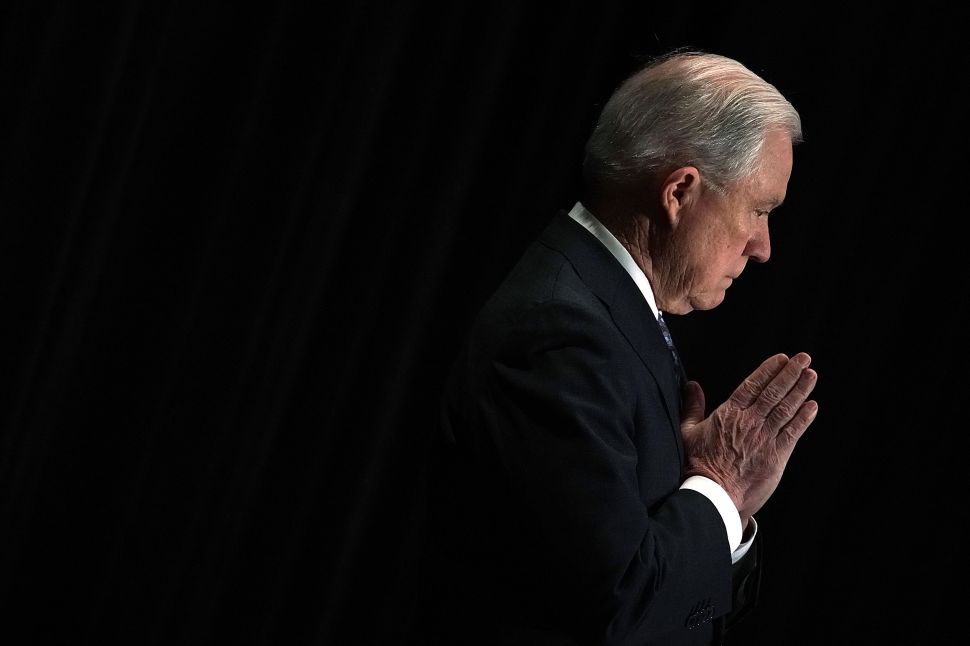