I’ve read countless books about happiness. The Art of Happiness, Hardwiring Happiness, The Secret—all the happiness hits. But rather than maintaining Polyanna-esque positivity, my personality could best be described as one of those old guys from The Muppet Show.

You’d think Americans would have nailed happiness. In addition to countless books on the subject, there are an endless amount of motivational speakers and scientists studying the subject—not to mention the never-ending supply of inspirational posts on social media. Each author, speaker, scientist, and meme has a different prescription for pleasure, but they tend to claim the “secrets” to happiness are things like mindfulness, gratitude, positivity and friendships.

The real secret, though, is that we’re still miserable.

Almost 12 percent of Americans are on antidepressants, and our increasing addictions, opioid and otherwise, have been well-documented. It seems the more we seek happiness, the more it eludes us. But despite our collective failure to achieve bliss, we continue to find its quest appealing, and the people who peddle pleasure make a lot of money off of it.

Our cultural fixation on happiness as the ultimate virtue minimizes the role genes, circumstances, and even things like sleep and hormones play with regard to our mood. And our collective fetishization of happiness appears to be extending to parenting. Where we once focused on our kids becoming successful and productive, we now “just want them to be happy.” Even so, a recent survey found that 52 percent of students feel “hopeless.” Unrealistic expectations about maintaining bliss create an incongruity between the ideal and the possible. It’s hard not to feel like a hopeless failure when the aim is nonstop euphoria.

Martin Seligman is among the leading scholars of “positive psychology,” which encourages us to focus on psychological positives and possibilities instead of pathology and problems. He has written several of the books I can’t quit reading and teaches classes on happiness at the University of Pennsylvania. He preaches the merits of optimism and teaches that a meaningful life doesn’t mean incessant giggling and whimsy. Even though his books are bestsellers and his classes are full, having the blueprint to happiness and applying it are two different things. When I asked him why people are discontent even though there is so much information about how to live more happily, he said, “That’s why I work on PERMA [his theoretical model that teaches people to apply the science on happiness]” rather than just positive psychology.

America’s worship of bootstrap-ism, determination, and friendliness make happiness a natural fit for our emotional #goals. And it seems like a no-brainer to want happiness and to encourage others to strive for it. Beneath the surface, however, it’s clear that consumerism, individualism, and self-centeredness are at the root of the American version of happiness, which perhaps contributes to the movement’s abysmal results. When happiness is narrowly defined or equated with emotion rather than overall wellbeing, peace or contentment, it always feels just out of reach.

One person who believes happiness is worth chasing, and is arguably the patron saint of the movement, is Oprah. In Kathryn Lofton’s Oprah: The Gospel of an Icon, she describes the way Oprah conflates stuff with self, and how her brand hinges on her audience’s desire for happiness and fulfillment. Oprah has become the embodiment of an inspirational meme. She even famously made eating bread sound like a spiritual experience. Her “Live Your Best Life” tour and her television network’s “Super Soul Sundays” are founded on the notions that seeking happiness is virtuous and joy is attainable regardless of circumstances.

Ironically, Oprah’s staff appears not to be living their best lives. On Season 25: Oprah Behind the Scenes and the Making Oprah podcast, we hear how the people responsible for producing Oprah’s show (including Oprah herself) and promoting its message of self-care have to work long hours, eat on the go, and endure enormous amounts of stress. In one episode of Seasons 25, Oprah says to her executive producer, Sheri Salata, “You and I are not going to survive if we keep this pace.” She continued, “I cannot keep up the pace that I’ve kept for 25 years and continue to do it well.” They discuss working until 3:30 in the morning and, in an act of desperation, ordering out for Ruffles potato chips. It seems even the ambassadors of wellness aren’t able to sustain it.

Over the years, Oprah’s brand has evolved from talk show host to something of a life coach to her millions of fans. Her ability to combine spirituality with entertainment demonstrates how formerly secular spaces include religiosity. Likewise, religious spaces are embracing otherwise secular messages or what they call “practical preaching.” This is perhaps most prevalent in evangelical traditions, as the happiness movement has bled into American religious life and people increasingly attending churches that fall under the “prosperity gospel” umbrella. The prosperity gospel teaches that faithfulness will bring you health and wealth in this lifetime. It is the brand of Christianity espoused by celebrity pastors like Joel Osteen and Joyce Meyer. The “Good News” according to these pastors is that rewards for devotion aren’t delayed until the afterlife and can be yours now. Be faithful to God, and you can get financial and physical rewards today. What’s not to love?

The appeal of this type of spirituality is undeniable. While most religious traditions are hemorrhaging adherents, prosperity churches (many of which do not explicitly refer to themselves as such) are thriving. In Blessed: A History of the American Prosperity Gospel, Dr. Kate Bowler notes that over a million Americans and counting attend a prosperity church.

Bowler knows how seductive the prosperity message can be. While studying the “health and wealth gospel,” a tradition that preaches that the faithful won’t get sick, she was diagnosed with stage-4 cancer. She notes the ordinariness of wanting to be happy, “Don’t we all just want to guarantee that something’s going to work out?” But after she was diagnosed she began to realize that, “Maybe I thought I was guaranteed all these things too.” Maybe we all secretly believe happiness, rather than merely its pursuit, is our birthright.

In 2011, Joel Osteen wrote a New York Times best seller called Every Day a Friday: How to Be Happier 7 Days a Week. In it, he outlined seven principles that he says will make you happier. He encourages people to find something each morning to be grateful for and to learn to ignore the small things that might otherwise trouble us. Ultimately, while the message is attractive, it lacks substance, and most of us already know that thankfulness and overcoming obstacles are advantageous. But Every Day a Friday sold millions of copies.

Perhaps we keep buying these books because advertisers promise that buying things will make us happier. Even Mad Men’s Don Draper said, “Advertising is based on one thing: happiness.” Everyone knows money can’t buy happiness, yet we believe we’re always one designer bag away from joy (or is that just me?). We covet the lives of the rich and famous because we believe they are happier—despite mugshots, failed marriages, and addictions that say otherwise (celebrities, they’re just like us!). So we buy things.

Now we have all the stuff, but we’re still not happy. What do we do? Declutter!

The minimalist philosophy was championed most notably by organizational guru Marie Kondo, whose book The Life-Changing Magic of Tidying Up instructs us to get rid of all that stuff advertisers encourage us to buy if it doesn’t “spark joy.” Kondo believes things should inspire happiness, and if they don’t they should be discarded. Once we surround ourselves only with things that inspire joy, then we’ll be happy. I suspect, however, there are a lot of people with a copy of Kondo’s book collecting dust amidst their piles of stuff. But her incredible success demonstrates how hungry we are for the fix.

We read books, we have faith, we buy things, and we purge stuff, but we’re still chasing happiness. Maybe the pursuit itself is actually preventing its manifestation. But I will probably still read another book on how to “rewire” my brain for joy, follow Instagram accounts featuring pictures of organized homes, and buy stuff because a celebrity told me to.

Oprah’s right about one thing though: eating bread is a spiritual experience, and it, at least for a minute, makes me very happy. 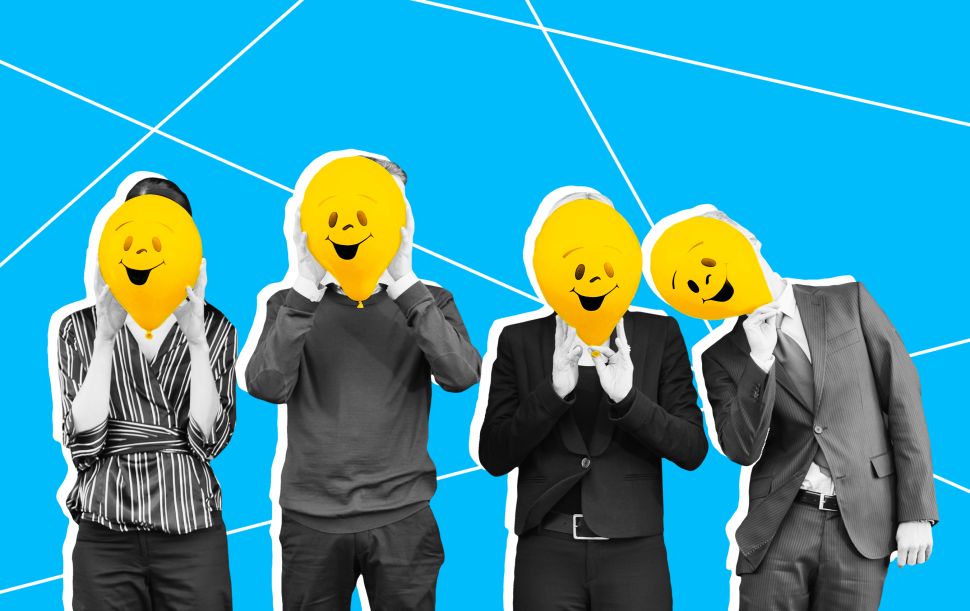