No current animation franchise lays stronger claim to the snap, crackle and pop of cartoon entertainment than Hotel Transylvania. With its crew of misfits and its penchant for screen-stretching chases studded with visual gags, it exists in a sweet spot between the rudimentary character comedy of Hanna-Barbera and the visual anarchy of Looney Tunes.

The third installment of the movie franchise, Hotel Transylvania 3: Summer Vacation, delivers reliably on the series’ humble promise of sugared-up monster slapstick. The film is pleasingly mild and distracting. While it overplays its treacly themes of family and finding love in our second act (though Dracula, in fictional age and pop culture mileage, is probably closer to his 30 thousandth act), this matters little to the core audience who have grown up on theses movies and have yet to be disappointed by them.

In a funny prologue full of comic violence, we are introduced to Abraham Van Helsing (series newcomer Jim Gaffigan) and his unsuccessful 120-year effort to kill the vampire Dracula (a returning Adam Sandler, doing a voice that has been annoying many of us for a quarter of a century now). Despite his worrisome feeding habits (never addressed here), Dracula is presented as a good-natured if lovelorn guy who runs a hotel where folks of his ilk can be treated decently, and even get married without attracting fire and pitchforks.

When Dracula’s daughter, the hotel events coordinator Mavis (Selena Gomez), decides he is stressed out, she books him on a surprise cruise vacation along with all of his monster friends: Frank, Dr. Frankenstein’s monster (Kevin James); Griffin, the Invisible Man (David Spade); Wayne the Werewolf (Steve Buscemi) and his chaotic litter of pups; and the rest of the shambling lot. (Mavis must have had a Groupon.) On board the ship, Van Helsing, now a disembodied head attached to a steampunk contraption that gets him around, restarts his quest to kill Dracula while the vampire attempts to find love with the ship’s captain, Ericka (Kathryn Hahn).

By virtue of being a vacation story and having a blood-mad, mustachioed hunter in hot pursuit, this installment comes closer to a stretched out classic Looney Tunes than any of the previous films in the series. (Didn’t it seem like Bugs Bunny, for a creature who did not appear to have a job, was always going on vacation?) The thick symphonic score from Devo’s Mark Mothersbaugh—which underscores the gags with soaring voices, brass and timpani—drives this point home. Merrie Melodies composer Carl Stalling would indeed be proud.

Adults may be disappointed that the movie has so little of the subversion of those classic Warner Bros. shorts. At the same time, the film’s theme of acceptance plays as a mild but important anecdote to some of the wicked intolerance that has seeped into our national discourse and has been picked up by young ears. When the ship’s captain announces before a party, “We’re here, we’re hairy, and it’s our right to be scary,” it is not difficult to hear echoes of classic cries for gay civil rights.

As yet another specimen of the countless pop culture pastiches littered with the presence of Adam Sandler and his amazing check-collecting friends, Hotel Transylvania 3 can be a pretty hard sit for certain adults. But it is important to remember that things that are especially stale for anyone who was even half-awake in the 1990s play surprisingly fresh if you’re, say, entering the fifth grade…the Macarena and Sandler’s oobi-boo-boo baby talk being prime examples.

Unburdened with our cynicism, those kids just find it funny. And you know what, they just might be on to something. 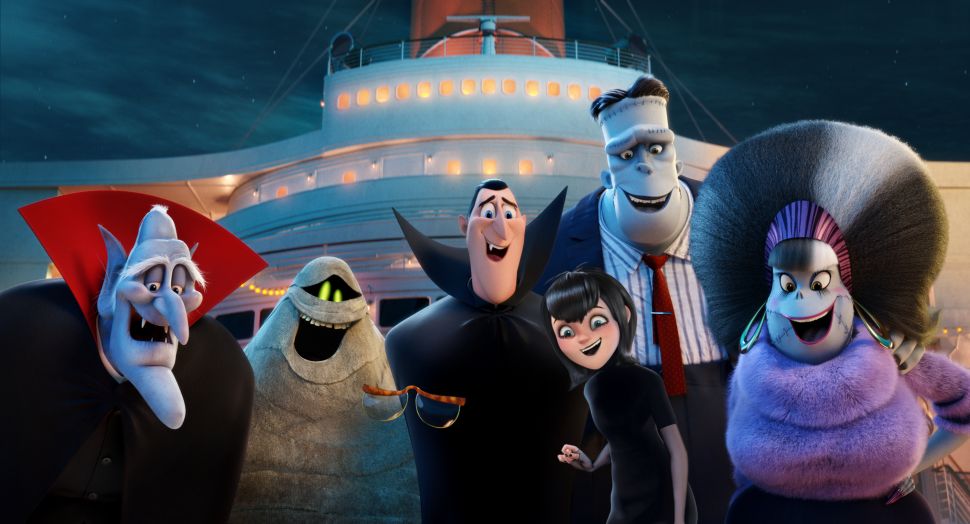