Last week Mark Zuckerberg found himself at the center of a controversy surrounding Facebook’s half-hearted attempts to push back against the disinformation that is rampant on the platform. In an interview with Recode he attempted to explain his reticence in banning sites like Infowars which regularly traffic in conspiracy theories and lies.

“I think there are things that different people get wrong,” he said, in an unprompted reference to Holocaust deniers. “I don’t think that they’re intentionally getting it wrong, but I think… It’s hard to impugn intent and to understand the intent.”

It’s the same line of thinking that legacy news media and wire services in particular of late use when tying themselves into knots trying to find synonyms for Donald Trump’s prodigious lies. The human heart… she is… how do you say… unknowable.

Zuckerberg attempted to pull his sensible dad-sneakered foot out of his mouth the next day, saying that the goal at Facebook is not to stop people from lying but rather to try to stop those lies from spreading too widely on its news feed. That was, of course, also weak piss , if a video currently going viral on Facebook today is any indication.

The video, an “interview” between Allie Stuckey of Conservative Review TV (CRTV) and rising star of the left and NY-14 primary winner Alexandria Ocasio-Cortez has garnered 1.2 million views in the 18 hours since it was posted. In it, Stuckey tries to get Ocasio-Cortez to explain her political views, her background and exactly what she thinks socialism means. It is also, as anyone with even a modicum of skepticism will realize after roughly 16 seconds of watching, complete and utter horse shit.

Ocasio-Cortez’s side of the interview is spliced together from one she did last week with Margaret Hoover on PBS’s Firing Line. But Stuckey and CRTV try, nonetheless, to pass it off as authentic, with at least a passing attempt at matching the color of the backdrop or the interviewers’ dress. Until a couple hours ago, after a considerable number of reports and complaints from viewers on the left, there was no indication in the description of the video that it was meant to be satire.

In much less cynical times you might give CRTV the benefit of the doubt that they trust their viewers to be able to pick up on the weird affect of the interviewer and the awkward editing on display in the video. Surely even the far right can’t think Ocasio-Cortez is this clueless, right? But you would be mistaken in that.

People are exactly dumb enough to fall for it, and reading through the comments on the video—only recently peppered with numerous critics calling it out for being fake— it’s clear thousands of them did.

“This woman has to be one of the dumbest, poorly educated and unqualified people to ever run for office,” wrote one fan of CRTV in the comments. “Only Maxine Waters is dumber.”

“What a dummy this Alexandria is,” added another guileless gun nana. “[She] doesn’t even know what socialism is or what countries are ruled by it, knows nothing about our US political system or even the Middle East … She’s a prop for the socialists and is pathetically uninformed! These are the types of young people (millennials) who are being ‘indoctrinated and used’ by the far left and really just want the lime light ! Sad!”

It would be one thing if Stuckey or CRTV in general were known for doing satirical stunts on a regular basis like this. Facebook is rife with people falling for what are clearly meant to be jokes from regular purveyors of such like The Onion. But this is something different. It’s weaponizing the gullibility of one’s fanbase in order to foment disinformation. If that tactic sounds familiar, it just so happens to be the m.o. of the likes of Infowars and the Trump campaign in general.

You can see where this puts Facebook in a bind, at least from its point of view as the ostensibly neutral waylay station for information from the right and the left. But when one side’s regular strategy is lying and regularly misrepresenting the views of politicians on the left like Ocasio-Cortez, there’s no way the company can crack down on them without being accused of bias itself. It’s a pretty insidious, but nonetheless ingenious, con from the right. Let us peddle our lies, or else be accused of stifling the truth.

That may be assigning too much credit to Facebook, however.

Sites like Infowars, and CRTV, and other right-wing propaganda mills are actually really good for business. What’s more, it’s not just the extremely cursed posts themselves that perform well, it’s the ensuing controversy around them that compounds sharing and engagement time on Facebook. Facebook doesn’t care if you share a video of a joyously dorky gender reveal party or a spiteful, rage-filled takedown of the latest dirty tricks from the right, they just want you sharing. People being mad, and people being mad at people being mad about something fake all come out in the wash the same bland hue.

There’s no truth anymore, that much is clear, although Ocasio-Cortez, in responding to the video, did remind us of one indisputable fact:

“Republicans are so scared of me that they’re faking videos and presenting them as real on Facebook because they can’t deal with reality anymore,” she tweeted. “Here’s one bonafide truth: Election Day is November 6th.”

Republicans are so scared of me that they’re faking videos and presenting them as real on Facebook because they can’t deal with reality anymore. 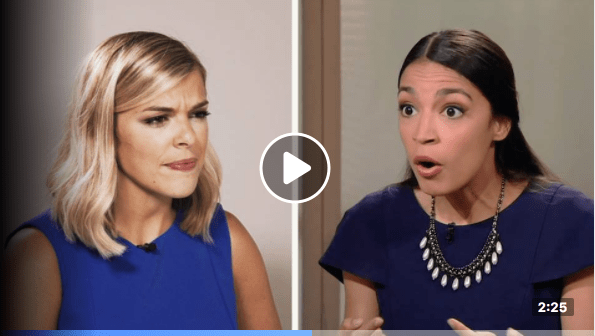