“As an Argentinian, I appreciate a good scam,” Amalia Ulman murmured into the microphone; several lissome students in skull caps tittered. Whatever falsities Ulman has constructed in service of her multidimensional, genre-neutral works of art, which have in the past taken the shape of Instagram posts, elaborate gallery installations and the invention of entirely fictitious characters, her presence in a room filled with enthusiastic patrons is undeniable.

Ulman, born in Buenos Aires and raised in Spain, was present at Gavin Brown’s Enterprise on the Lower East Side on Thursday evening to perform a gallery-adjusted variation on a “performative lecture” called AGENDA, which she had formerly been giving at various universities in conventional classroom settings. Perhaps in keeping with this theme, she was dressed conservatively, like a coy librarian in a B-movie, and as the main event began, her microphone-amplified voice never rose above a pleasant mumble.

Amalia Ulman’s calling card as a rising star in the contemporary art world is a 2014 series called Excellences & Perfections, which she executed entirely over her Instagram feed and which frequently veered into the realm of brilliance. Frustrated with the lack of headway she was making in her career, Ulman conspired to experiment with the rhythms of fiction on the internet and scripted out a three-act social media narrative which would follow a tragic heroine’s naive origins, her downfall and her eventual redemption. Ulman cast herself as the central character: an aspiring LA model torn asunder by the demands of inhabiting an aspirational lifestyle.

In the course of Excellences & Perfections, Ulman’s character shares an image of her bandaged, supposedly surgically enhanced breasts, captioning the photo with assurances that the augmentation was worth the pain. Ulman later told reporters that she’d stuffed the bandages with socks to achieve the desired effect.

Because she didn’t reveal that the series of Instagrams had been performance art until the work’s conclusion, Ulman dealt with real-world backlash from peers who couldn’t understand why she was embarrassing herself online.

“People started hating me,” Ulman told The Telegraph in 2016. “Some gallery I was showing with freaked out and was like, ‘You have to stop doing this, because people don’t take you seriously anymore.’ Suddenly I was this dumb bitch because I was showing my ass in pictures.”

Years later, Ulman no longer needs to hide behind a digital mask to endear herself to unconvinced gallerists.

Perhaps due to the way she plays with identity and self-parody, Ulman has frequently been compared to master chameleon Cindy Sherman. Sherman flirts with horror and disgust in her self portraits; Ulman’s vaporous effervescence has more to do with innovators in the internet sphere, like YouTube vlogger Lonelygirl15, who tricked scores of viewers into believing she was a 16-year-old girl named Bree.

In truth, Lonelygirl15 was the creation of Miles Beckett and Mesh Flinders, two filmmakers who’d anticipated the power of first person web video and decided to write a story from the perspective of a homeschooled girl, alone in her bedroom. Beckett and Flinders were onto something: “Bree” is shy, vulnerable and absorbing, peering into her webcam and inviting the audience to contemplate her innermost anxieties.

Ulman delivered AGENDA (which clocked in at around 12 minutes) to a packed crowd of young onlookers with poise and impish self-confidence. She talked briskly as the PowerPoint-ish presentation behind her whizzed through brief, flashing images of 3D pregnancy animations, pigeons, clocks and drab office buildings. The effect was hypnotic, especially since Ulman seemed to be foregoing the traditional lecture format in favor of uttering seemingly disjointed phrases which, if not thematically coherent, were certainly pleasurable.

“Things like art just are,” she purred. True enough, though not particularly original. “In heaven, there are no couples,” she said a few minutes after that, as footage of midday skies and inverted crosses flickered behind her.

In form and content, AGENDA bears certain similarities to “My Boyfriend Came Back From the War,” an influential 1996 work by Olia Lialina, which employed interactive browser functions to tell the story of a couple in the midst of a breakup. AGENDA would have benefitted from audience participation; sitting in the rustling crowd while letting the performance wash over you wasn’t much more than soporific.

When the show was over and the lights came back on, I felt a bit let down; AGENDA, frankly, is largely incoherent. It seems much more worthwhile to contemplate Ulman herself as a facet of her art, which many people who attended the show seemed to be doing already.

Zach Frisch, 21, a student at Corcoran School of the Arts & Design, said Ulman has placed herself on “the forefront of the new generation by engaging with Instagram and body image,” referring to a more recent project of Ulman’s where she faked a pregnancy. Frisch’s remark reminded me of another young woman whose public brand had everything to do with her work: Anna Delvey, the Russian expat who ripped off scores of art world New Yorkers on her path to notoriety and imprisonment.

During the height of her manipulation, Delvey’s Instagram content looked remarkably like Excellences & Perfections. Bland and laconically luxurious, Delvey’s images seduced just as much as they deflected. After all, scammers hiding in plain sight won’t scream to be looked at: their objective is to hold your attention just long enough for you to decide there isn’t much going on below the surface. 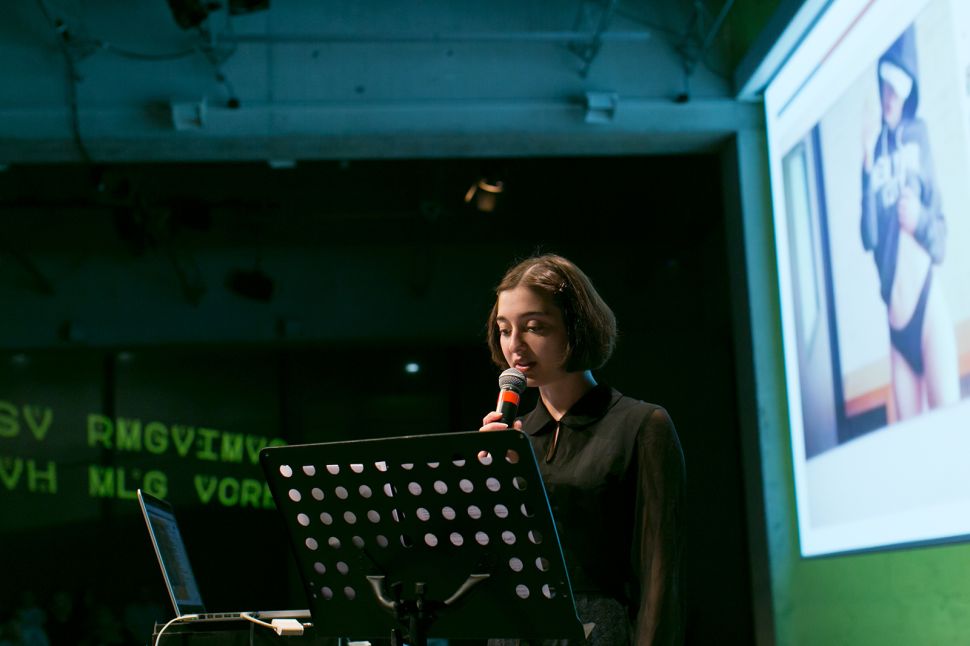