Laugh all you want at those memes poking fun at Marvel’s claim that Avengers: Infinity War was the most ambitious crossover in history, but the studio was absolutely right. There are no Sherlockian investigations that could ever provide a satisfying answer to the mystery of how Marvel was able to tie together characters and storylines from 18 different blockbusters into one (mostly) tidy package. But the studio’s efforts were rewarded with a record breaking smash hit.

Which is why the MCU is at such an interesting and precarious crossroad as studio head Kevin Feige prepares to reverse course and go small—both literally and figuratively—with Ant-Man and the Wasp. All five of the MCU’s most recent films have grossed at least $850 million worldwide with two crossing $1 billion, making it clear that Marvel is on the most impressive run of its 10-year existence, punctuated by the game-changing success of Infinity War.

Can the studio really afford to downsize after such a mind-blowingly big game run?

After five BIG movies, Ant-Man and the Wasp offers the opportunity for some quality counter-programming, a palate cleanser ahead of the massive Avengers 4 coming out next year. Instead of universe-defining stakes that threaten billions of lives, the Ant-Man franchise has occupied a smaller corner of the MCU that deals with lesser threats.

In the first movie, Corey Stoll’s Darren Cross/Yellowjacket plans to sell Hank Pym’s shrinking technology to Hydra, a villainous Nazi splinter group quite familiar to MCU fans. Nazi’s are bad—that is something we can all wrap our heads around (at least I thought it was). Trying to explain to someone not familiar with the MCU where Asgard is located or the origins and importance of a celestial is a bit trickier. This sequel’s big bad is Ghost, a criminal who can phase through walls and, in the comics, was mostly concerned with various political and economic institutions.

At this point, it might be refreshing for fans to see the MCU pull back on the reins a bit. You don’t want to run back the same idea every single time like the Jurassic World franchise.

If all Marvel movies hinge on the biggest stakes with the biggest events and the biggest crossovers, then the creatives at the studio would be putting a ceiling on their universe, prematurely capping its potential. Each battle loses its meaning if the fate of the universe hangs in the balance every time out. Each movie feels less special if it’s crammed full of all your favorite characters.

That’s something the Harry Potter franchise balanced really well, taking a slow-burn approach and methodically building up Voldemort and his followers as a threat with each successive story. By the time Deathly Hallows Part II arrived, we were fully engrossed in the conflict because it had organically reached its peak.

In order to truly value films like Infinity War and Marvel’s other life-or-death adventures, it’s imperative to offer smaller-scale, character-driven vehicles that remind audiences that the real world with real people still exists.

In 2012’s Avengers, the Chitauri lay waste to New York City, but all civilian causalities occur off-screen. In 2015’s Age of Ultron, we barely know any Sokovians, so the destruction of their city still feels like more of a plot device than an emotional punch. In Infinity War, half the universe’s population is wiped out, but since marquee heroes with sequels on the horizon—such as Spider-Man and Black Panther—are among them, we already know Thanos’ genocide will be reversed.

Going small humanizes our hero, which can be hard to do when you’re dealing with otherworldly superhero powers. Thor is literally a God; Hulk is a giant green rage monster; and Tony Stark is a billionaire genius playboy philanthropist. Paul Rudd’s Scott Lang is just some schlub ex-con. He’s not trying to save the world, he’s just trying not to mess it up too badly.

As Thanos would say, there must be balance or else neither the big events nor the small-stakes movies can work.

The Disadvantages of Going Small

Conversely, Marvel fans may have now grown accustomed to big event crossovers with significant implications. In the last three years, the MCU has produced two Avengers films, one psuedo-Avengers film (Captain America: Civil War), the highest-grossing superhero film in North American history (Black Panther) and a handful of other team-ups on a larger scale. Thor went toe-to-toe with the Hulk. You just don’t see that everyday.

Arriving on the heels of all that, Ant-Man and the Wasp runs the risk of feeling like a letdown, the hangover after the party.

Will fans be entertained by something less dire and grandiose?

The sequel has just two heroes as opposed to the stuffed action of Marvel’s Phase III slate. Lower stakes may be a good refresher, but there’s a lot of overlap in the MCU between the ideas behind Ant-Man and Spider-Man: Homecoming (and it surprisingly has nothing to do with their bug roots).

Peter Parker is all about protecting the little guy and serving as a friendly neighborhood Spider-Man to remind audiences about the people on the ground. Despite all of his stealing and selling of dangerous weapons, the whole motivation for Homecoming‘s villain, Michael Keaton’s Vulture, was supporting his family. Spidey gets to take on his smaller-scale threats as a far more popular and enjoyable character (no disrespect to Paul Rudd, who is always great).

Do we really need a second, less entertaining version with the same lesson?

More importantly, 2015’s Ant-Man is hardly the best foundation to continue these scaled-down Marvel movies. The film feels bogged down with its need to tie into the greater MCU, from the unnecessary Falcon cameo and the early days of SHIELD to all of the smaller references littered throughout. Ant-Man‘s Easter Eggs feel particularly exhausting rather than clever and endearing. The movie also comes off rather vanilla as a standard origin story.

While director Peyton Reed is a talented filmmaker with several interesting credits to his name, it’s hard not to wonder longingly about what kind of shape Ant-Man would have taken had the previously attached Edgar Wright (Baby Driver) not bolted due to creative differences. His version was said to be more morally ambiguous and far more of a standalone affair. Anyone who enjoys the Cornetto trilogy knows his take would have been… unique. As a fan-favorite filmmaker, Wright’s departure left many moviegoers disappointed similar to Phil Lord and Chris Miller’s exit from Solo: A Star Wars Story.

Regardless of director, the studio is now attempting an about-face from its recent large-scale run with one of its mid-tier properties. That’s a bold strategy, Cotton.

It’s not a stretch to see casual moviegoers skipping out as a result; the MCU has grown so large and ambitious that anything else may feel off-brand to an average ticket buyer.

Can Marvel Afford the Risk?

There exists the danger here for a drop in fan interest after the serotonin dump of the last few months. Ant-Man was received as a general crowd-pleaser but still ranks in the back half of MCU entries in terms of Rotten Tomatoes score. The Atlantic‘s Christopher Orr wrote of the movie, “It’s difficult to shake the sense that the film was assembled hurriedly and somewhat haphazardly. Which, from all available evidence, is exactly what happened.”

Dropping a disappointing sequel could stunt some of Marvel’s momentum, especially as rival DC Films gets its house in order.

Having said that… of course the MCU can afford to go small because it has built up an unprecedented amount of goodwill and brand loyalty. This is the same studio that powered a ragtag group of unknowns in Guardians of the Galaxy to worldwide fame and acclaim, not to mention $773 million at the box office. You just slap that Marvel logo on to anything and there will, at least, be curiosity if not outright enthusiastic interest.

Anything that costs at least $100 million is considered a blockbuster, but the Ant-Man franchise comes in on the low end of Marvel’s financial spectrum. The original was made for $130 million (excluding marketing costs), a noticeable step down from the budgets of Spider-Man: Homecoming ($175 million), Thor: Ragnarok ($180 million) and Guardians of the Galaxy Vol. 2 ($200 million). Even Marvel’s embryonic Phase I slate—Iron Man ($150 million), Thor ($140 million) and Captain America: The First Avenger ($140 million)—cost more to produce.

There’s no reason to expect Ant-Man and the Wasp‘s budget to balloon that far past its predecessor, as the average increase from an MCU franchise’s first to second film is around $34 million.

Ant-Man opened to $57 million back in 2015, en route to $519 million worldwide. It is the MCU’s fourth lowest-grossing entry globally and third-lowest grossing domestically, yet was still considered a win. The sequel is tracking for a rock solid $75 million to $85 million opening. Even if it doesn’t cross the magical $850 million threshold of the MCU’s recent output, all indications point to Ant-Man and the Wasp emerging as a moneymaker.

Marvel can absolutely afford to do a 180 in terms of scale. They haven’t had a flop in roughly a decade, and the brand’s worldwide popularity practically ensures a high floor for Ant-Man and the Wasp. Even in the worst case scenario, a box office bomb wouldn’t slow the thundering momentum of the Marvel Cinematic Universe. 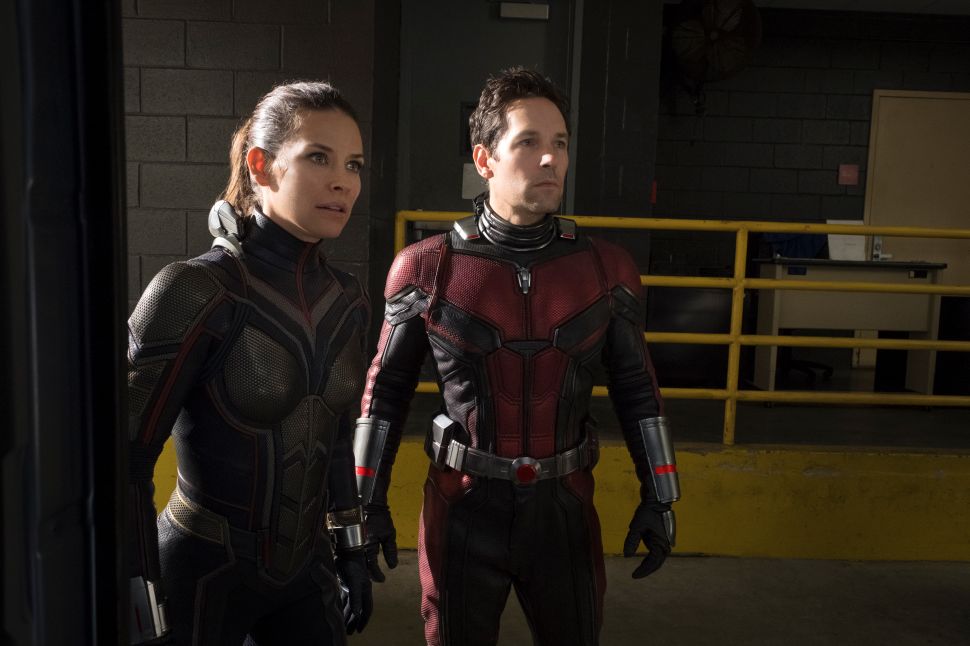