Candles are just as seasonal as your wardrobe, so it’s time to swap out your favorite winter votive for a scent that’s evocative of summer. Sure, there are a few staples that transition oh-so-seamlessly, but just as you stowed your down coats, you can store those cold-month holiday fragrances in favor of a bloom that’s more fitting for a July fête.

Luckily, there are now endless options for every summer happy place, be it lounging on a southern beach, frolicking in the Hamptons, hanging at home or exploring the French Riviera. So whether you dream of salt , sandy beaches, fresh florals, lush forests, soft linens or anything in between, we’ve found the best candles to light this summer.

Lafco already received the gold medal of approval known as Oprah’s Favorite Things. It’s hard to pick just one of the summery scents, but Sea & Dune Beach House is the most popular. The watery blue lotus, beach grass, amber and ginger comes together to create a luxe, beachy aroma, but we’re also partial to the Amber Sea Foam Cottage House, which has hints of amber and almond. ($65 at Nordstrom)

It’s hard to go wrong with anything Jo Malone, and this aroma of sea salt, sage and ambrette seeds is reminiscent of a day by the . ($67 at Jo Malone)

Skylar’s soy wax candles are all-natural, eco-friendly, paraben free, vegan and have lead-free wicks. As you may have guessed, they’re made in Los Angeles. Coral is ideal for these toasty months—it’s composed of citrus and florals, with hints of jasmine, rose and vanilla. Once you’ve finished burning the candle, you can still use the holder for something more exciting than your make-up brushes—it doubles as a nightcap glass. ($38 at Skylar)

Cire Trudon wins in the pedigree department—it was founded in 1643 on the eve of Louis XIV’s reign. The candlemakers are still going strong today, and just released a new, limited edition candle called “SIX,” a reference to the heart as the “sixth sense.” The floral scent includes a mix of jasmine, gardenia, carnation, lily and vanilla, and it comes with a leaflet of sense-themed stickers so you can decorate accordingly. ($105 at Trudon)

Rosé might be the summer drink of choice for many, but bubbly prosecco is never a bad idea. Voluspa’s coconut wax votive has notes of sparkling pink prosecco and rose petals, all in a very pink gold-flecked glass jar. ($65 at Nordstrom)

Since summer isn’t only about flowers, this limited edition scent is touted as “crisp.” Indeed, it exudes freshly washed linens and hints of apple blossom and white orchid. It also happens to be very pretty, as the design is influenced by glass made on the Italian isle Murano. ($40 at Neiman Marcus)

Like we said, it’s not all about the blooms. This aroma is part of Lumira’s Collezione Bianca; three scents in minimalist white containers, inspired by Ellsworth Kelly’s simple designs. Sirocco is a nod to the North African wind in the Mediterranean and southern Europe, with citrus, tangerine, cedar, sandalwood and vanilla. ($65 at Barneys)

This beloved French perfumer is always a safe bet. Their three-candle collab with German designer (and former Bottega Venetta creative director) Tomas Maier has remained popular, and Old Montauk Highway is perfect for a Hamptons retreat. It has notes of lady slipper orchids, pine, heather, bayberry and “salty ocean breeze,” all in a chic matte black vessel. ($72 at Diptyque)

Field + Fleur is a female-owned and operated company in rural Kentucky; it employs 30 local women, who grow all of the soy used in the candle wax. The Beach Wood scent is comprised of peach, orange blossom, saffron, moss, amber and sandalwood, and fitted into an adorable wicker-wrapped jar. ($54.50 at Hill House Naturals)

Aerin Lauder‘s eponymous home line offers plenty of candles, but this Sintra Gardenia votive is particularly evocative of summer. It’s inspired by the gardens in the Portugal town Sintra, with a bouquet of gardenia, cinnamon and cedarwood. Artist Helen Dealtry designed the floral packaging. ($80 at Aerin)

We happen to be partial to fig scents, and this soy wax candle fits right in there. It also has a bit of grass and violet, because of course a Cape Cod-based company knows how to hand-pour summer. ($38 at Elyse Maguire)

Even if you don’t make it to the Italian riviera this summer, the next best thing is filling your home with the scent of Portofino, right? It’s a splurge-worthy bouquet of citrus oil, florals and amber that goes perfectly with a side of gelato. ($98 at Net-a-Porter)

Look no further than the moniker—how can you say no to an actual Summerland candle? Sure, the name comes from the coastal California town, but it feels pretty universal, as long as you forget the horrendous excuse for a WB television series with the same name. Moving on, the coconut wax contains basil, honeysuckle, salt and vetiver, all in a matte white glass. ($68 at Jemma Sands)

Hamptons local Brittany Torres launched her homemade scents, which are entirely soy and plant-based, in 2015. Each candle in the Village Collection is inspired by a different spot out east, like the Southampton’s fragrant cotton, gardenia and white tea, and East Hampton’s cashmere, fig and strawberry blend. ($28 at Etsy)

Bastide’s products are all inspired by the Provence summer, so even if you can’t make it the south of France, at least there’s a little été at home. So, fig! The name of this fresh, woodsy scent translates to Fig of Summer, with green fig leaves, cassis and white cyclamen petals. ($65 at Bastide)

There’s no getting around the fact that summer is synonymous with mosquitos. Taja has a chic yet practical solution to this with their Bugger Off flame—it’s made with citronella oil. Their candles can also be entirely customizable, if you want to add a unique touch to the packaging. ($35 to $95 at Taja Collection)

In order to perfect this scent, Hudson Grace had southern magnolia flowers cut at morning bloom and overnighted daily to the New York fragrance house. The aptly named Savannah is a balance of magnolia blossoms with floral and citrus—it’s all very southern belle, and feels like Reese Witherspoon would be a big fan in the best way possible. ($65 at Hudson Grace)

Of course Gwyneth Paltrow‘s Goop-y foray into fragrances has to be something other than just a candle. No, this is a “mystical scented candle,” but it does smell amazing—it has hints of apricot, hay and earth, with sandalwood and orris root that really does radiate the feel of a hot summer afternoon. ($72 at Goop) 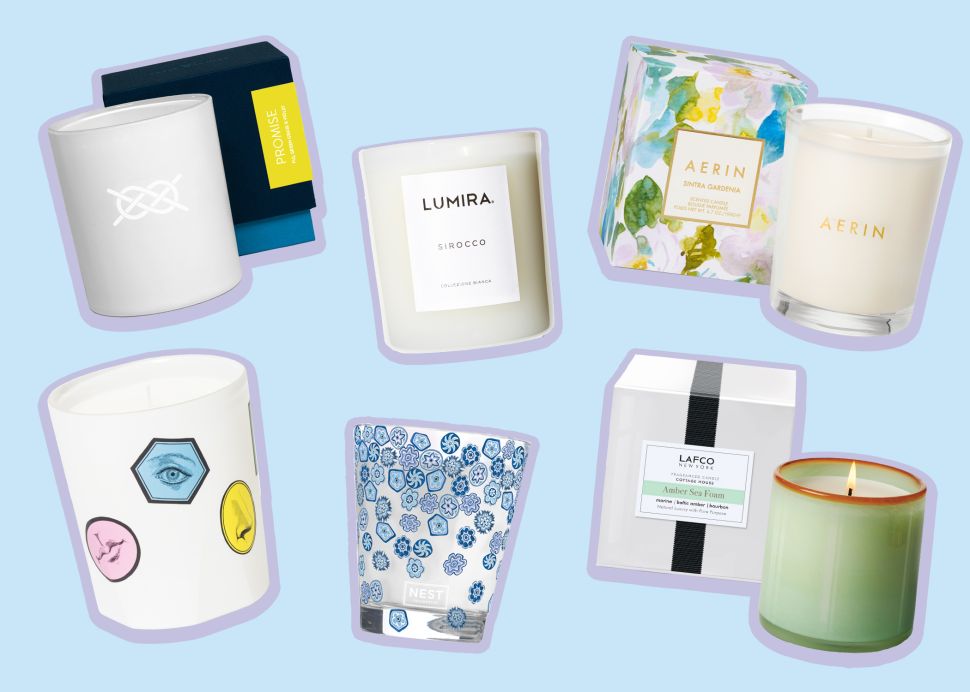