During Shine’s two decades there, his most famous and most expensive employee was Bill O’Reilly, a serial sexual predator against women. That didn’t bother Shine either. Another former employee, and still a close pal, is Fox propagandist Sean Hannity, who is an unofficial advisor to and lead fluffer for President Donald Trump.

Now that Shine was officially hired Thursday as a communications specialist for Trump’s White House, he will work for a dangerously amateur president who paid either a bribe or blackmail or hush money (take your pick) of $130,000 to a sex-film actress to cover up a one-night stand right after Trump’s third and current wife gave birth.

So Shine should feel right at home in Trump’s frat pad at 1600 Pennsylvania Ave. He knows Trump’s type. Perhaps Shine could put a red light in the window of the Lincoln Bedroom and look the other way while business arrangements are carried out. The walls of the room could feature photographs of the First Lady from early in her modeling career.

Shine, Trump’s fourth communications director, replaces Hope Hicks, who left in March. He traveled with Trump on Air Force One Thursday to Great Falls, Montana, where Trump gave one of his rambling, menacing, disjointed campaign speeches to another shouting, chanting mob.

Only one network of the big three on cable news carried Trump’s speech live. Guess which one? Fox gave Trump one hour and 14 minutes of free infomercial time uninterrupted by ads. His speech sounded much like the scripts of Hannity, Tucker Carlson and Laura Ingraham, who reliably fill Fox’s prime time with abject praise for the large, loud, 72-year-old, orange-faced, yellow-haired demagogue.

It was Ailes, Shine, O’Reilly and Hannity who perfected the art of the false narrative based on a sliver of distorted truth told from studio sets that look like those used on TV in honest newscasts. Fox promoted Trump’s lie that President Barack Obama was born in Africa.

They sold story lines and catch phrases and buzz words with incessant repetition. From white resentment and fear of foreigners, Fox forged the hard base upon which Trump now stands, the very viewers who cheer his cruelty and his contempt for enemies. Fox under Shine perfected “fake news” before anyone used the term. Now, Trump uses those words to smear everyone else.

“The crooked press, they are so dishonest!” Trump thundered Thursday to a white-faced, red-necked crowd of Montana yahoos in hard hats and cowboy hats who just kept a-hootin’ and a-hollerin’ for their favorite New York city slicker.

Shine’s official hiring as “Assistant to the President and Deputy Chief of Staff for Communications” got some notice on some cable news channels Thursday night but not on Fox.

The bigger news was the “resignation” of Scott Pruitt, the Oklahoma grifter who damaged the Environmental Protection Agency as its director while self-dealing in a way too brazen even for Trump. Did Shine tell Trump to dump him? We may never know.

Unlike most of the blowhards at Fox, Shine kept a low profile until he got let go in 2017 amid the Fox sex scandals. Shortly before that, in a blog post, his wife—Darla Shine—bragged about how well her hubby gets along with the all those foxy babes, chicks, dames, skirts and broads who work at Fox by posting a picture online of her husband posing with eight female Fox anchors.

“Wow,” Mrs. Shine wrote, according to the New York Times. “My husband is one lucky guy.” Mrs. Shine is also the author of Happy Housewives, a book about women knowing their place. She’s one lucky gal.

According to the Times, her hubby was seen in the Fox newsroom “as embodying a typical Fox News viewer: an Irish-Catholic family man, son of a New York City police officer.”

Like Hannity, O’Reilly, Anthony Scaramucci and Trump himself, Shine is a certain type of Long Island guy. He’s “tough” and he’s “strong,” buzz words that Trump kept repeating again Thursday night. Shine’s hiring brought differing Twitter reactions from a woman who knows Shine and from a man who knows both Trump and Shine.

The Twitter woman was Gretchen Carlson, a former Fox anchor awarded $20 million from Fox after filing a sexual harassment suit against Ailes in 2016.

This …. on the 2 year anniversary eve of filing my harassment lawsuit; giving women a voice, letting them know you can be believed, launching a national movement to stand up and speak up and say enough is enough. Life … works in mysterious ways. #BeFierce https://t.co/Sc5bBVB2xL

And the Twitter man was Donald Trump, Jr., son of Donnie Two-Scoops, who happens to be getting divorced while dating Kimberly Guilfoyle, one of five Fox anchors on The Five.

On your marks, get set…. how long till the liberal media and snowflakes start taking shots at the great Bill Shine? Competent, hard working and a believer in making America great again! https://t.co/iqJqSiIOs7

The Washington Post noted that Shine was named in suits filed by Carlson and other Fox women Julie Roginsky and Andrea Tantaros for his role in “allegedly discouraging women at the network from taking their harassment claims to court.”

If Shine listened to Trump Thursday, he must have enjoyed hearing the president mock the #MeToo movement to stop sexual harassment. He must have loved how Trump insulted three Democratic female politicians.

They were “Crooked Hillary” (Clinton), “Pocahontas” (Massachusetts Sen. Elizabeth Warren) and Congresswoman Maxine Waters of California who, Trump said, “is a low-I.Q. individual.”

Afterward, during Thursday night’s prime-time shows, MSNBC and CNN offered segments about Shine, but Fox just couldn’t find the time from 6 p.m. until 11:30 p.m. when Ed Henry finally read a blurb that lasted all of 22 seconds.

This, for major news about a man who worked at Fox from Day One for 20 years and built it into such an impressive propaganda factory. Why would Fox bury such a good-news story? Local boy makes good! And even media “reporter” Howard Kurtz himself was on live in the 10 p.m. hour. If he doesn’t “report” about Shine’s hiring, how can Fox viewers “decide?”

Better coverage came in the 9 p.m. hour on MSNBC when Joy Reid—substituting as host of The Rachel Maddow Show—spoke with Gabriel Sherman of Vanity Fair, an expert about Fox. He characterized Shine’s hiring as “the symbiosis that exists between this White House and Fox News” and he called the network a “recruitment organization” for Trump’s White House.

“An executive who helped cover up some of Ailes’s most dark and deviant behavior is now one of the highest members of the federal government,” he said of Shine. “This is basically the Sean Hannity presidency.”

On CNN, in the same hour, former Trump campaign aide Steve Cortes defended Shine as “a friend of mine and an American patriot” with TV talent.

With so much churn on the White House staff, Trump should soon turn to another Republican who attracts voters, earns a lot of money and—most importantly in Trump world—appeared in a TV reality show. The man is Dennis Hof, the legal Nevada pimp from the HBO show Cathouse.

After winning the recent Republican primary for a seat in the Nevada legislature, Hof said, “I’m riding the Trump wave. He found the wave and I jumped on it.”

Perhaps master programmer Shine will see the potential of Hof for a White House talk show (maybe on Newsmax or OAN?) that would be the mirror of the Fox hit Outnumbered that airs weekdays at noon.

Instead of using four leggy women surrounding one man as they do on Outnumbered, the new version could have four fellas surrounding one woman, perhaps one of the dozen or so who have accused Trump of unwanted sexual assault. Or maybe just invite Kimberly Guilfoyle. Or Melania. Or Kellyanne Conway.

The guys on the panel could include Hof and O’Reilly and Judge Roy Moore and a rotating fourth dude who might even some days be Trump himself! The gents could enjoy some “locker-room talk” until the lady blushes.

Close-up on her! Cut to commercial! Think of the ratings! What do we call it? Can’t say “White House Cats,” can we? No. That would be tacky. Can’t use Cathouse, either, can we? Wait. I know, I know! We call it Hound-Dog House! 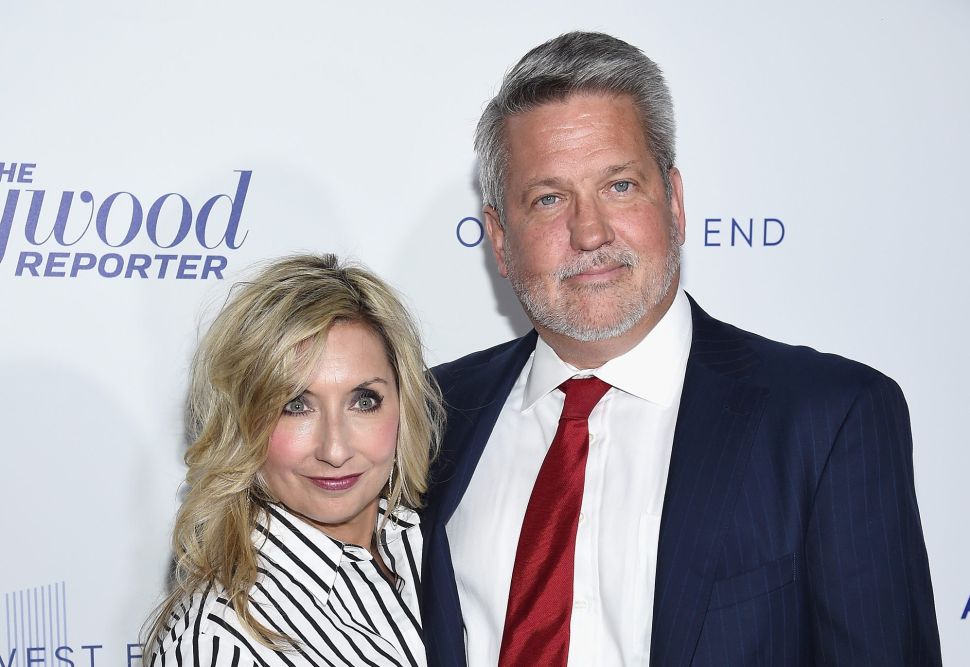