Millions of people around the world will witness a rare celestial treat today as the moon—the shimmering celestial spotlight that normally illuminates the night sky—is turning an eerie shade of red. But don’t worry, this is all part of a natural phenomenon called a “blood moon.”

The term “blood moon” is used to describe the celestial orb’s appearance during a lunar eclipse, which occurs each time the Earth passes between the sun and the moon. During these passes, our planet’s shadow falls over the moon, blocking out the sunlight it normally reflects. Unlike a solar eclipse—when the moon passes between the Earth and sun, blotting out the star’s light—the moon does not turn dark, but instead appears as a deep red color.

This is due to atmospheric effects.

During a lunar eclipse, the Earth blocks the majority of the sun’s light, but not all of it. Some light still touches the moon’s face. As the light from the sun’s rays travel through Earth’s atmosphere, most of the colors in the visible spectrum are filtered out due to scattering. Only the red and orange wavelengths are able to reach the lunar surface, giving it that reddish hue and earning it the title of “blood moon.”

Today’s eclipse marks the second appearance of a blood moon so far this year, and this one’s a bit unique as it also happens to be the longest lunar eclipse of the century.

Spanning Friday night and Saturday morning, the moon will be totally eclipsed by the Earth for one hour and 43 minutes. During this brief period, the moon will glow an eerie shade of red, so be sure to go outside and look up.

Thanks to science, we know that this seemingly strange phenomenon is actually quite common—and benign. Today, such celestial events are a cause for celebration with viewing parties, road trips and astronomy talks. But that wasn’t always the case.

Supernatural Signs: The Significance of Blood Moons Through the Ages

Throughout history, each time our satellite was covered by the Earth’s shadow, portions of humanity failed to gaze upon it with whimsy and wonder, instead perceiving it as a sign of impending doom.

Ancient cultures and religions around the globe attempted to explain the existence of both solar and lunar eclipses. Many of those stories featured gods, demons and even mythical creatures that threatened to devour the sun or the moon. People would pray, made offerings and sacrifices to ward off the would-be destroyers.

For instance, the Incan people believed that the deep red coloring witnessed during a blood moon was caused by a jaguar attacking and eating the moon. They believed that the jaguar might then turn its attention to Earth, so the people would shout, shake their spears and make their dogs bark and howl, hoping to make enough noise to drive the jaguar away.

Given their ability to predict celestial events, the people in ancient Mesopotamia looked at things a bit differently. They viewed lunar eclipses as a direct assault on the king. They would even go so far as to hire a body double—usually a member of society deemed expendable—to fill in for the king during an eclipse. Once the eclipse passed, the real king would return and the double would never be seen again. What happened to them, we can’t say for sure.

Some even used the eclipses for their own personal gain, capitalizing on other’s fears.

In 1504, famed explorer Christopher Columbus leveraged the concerns that Jamaican natives had over the moon’s crimson appearance. During his fourth and final trip to the New World, Columbus and his crew were thwarted by an epidemic of shipworms. The creatures had munched their way through the hull of his two ships, and the crew was forced to abandon their fleet.

The islanders welcomed Columbus and his crew, offering to feed them. Six months later, however, their hospitality had worn thin. Columbus—armed with an almanac that predicted an upcoming lunar eclipse—met with the local chief, telling him that the Christian god was angry over the native’s resentment to Columbus and his crew. He said that a bleeding moon would appear in the sky, a sure sign of God’s anger. When the eclipse came to pass, the islanders were so terrified they brought provisions to Columbus, begging for forgiveness. The explorer said the natives were pardoned just as the eclipse ended and the moon’s brightness returned.

For the most part, humanity’s perception of these celestial spectacles has evolved over the centuries from feared to celebrated. Yet despite having the tools to predict when and where these celestial events will occur, some people still don’t have a clue and choose to perceive them as a harbinger of death.

As witnessed by the tale of Columbus, Christianity has long equated lunar eclipses with the wrath of God. Easter Sunday typically falls after the first full moon of spring, and as such, eclipses can also be associated with the crucifixion of Jesus. However, it wasn’t until around 2013 that the descriptor “blood moon” was linked to the lunar eclipse. This is in part due to the release of a book called Four Blood Moons by Christian minister John Hagee.

Hagee pedals an apocalyptic belief known as the “blood moon prophecy” highlighting a lunar sequence of four total eclipses that occurred between 2014 and 2015. He explains that all four events occurred on Jewish holidays—which only happened three times before—and coincided with a bad event each time.

Hagee’s prophecy proved to be hokum, but the label still lives on.

While an eclipse is still an eclipse anyway you slice it, colorful labels go a long way in attracting the public’s attention. So, by using the term “blood moon,” perhaps we are combining superstition with science. The moniker attracts interest in the sky and lunar eclipses, but rather than awaiting doom and destruction, we now choose to view it as a testament to the fascinating and real motions of our solar system.

When and How to Watch the Lunar Eclipse

Today’s main event will begin at 3:30 p.m. EST, with the moon retaining its ruddy face mask until 5:13 p.m. EST. But the celestial event will actually start a few hours before that, when the moon is only partially eclipsed by the lighter part of Earth’s shadow, dubbed the penumbra. If you have the time, you can view the eclipse from start to finish, watching as the moon changes various shades of red over a four-hour time period.

Unfortunately those of us living in North America will be forced to watch the event on our computer screen, nature’s version of the jumbotron. For those lucky folks living in Eastern Africa, the Middle East and Central Asia, all you have to do is go outside and look up. (If you’re in West Africa, South America, Europe or Australia, you will have a partial view!)

If you either can’t get outside to watch or it’s not visible in your area, Slooh will be live streaming the event for your viewing pleasure, beginning at 1:00 p.m. EST on July 27. And as an added bonus: the internet will undoubtedly offer incredible views from around the world that you wouldn’t get from your own backyard. 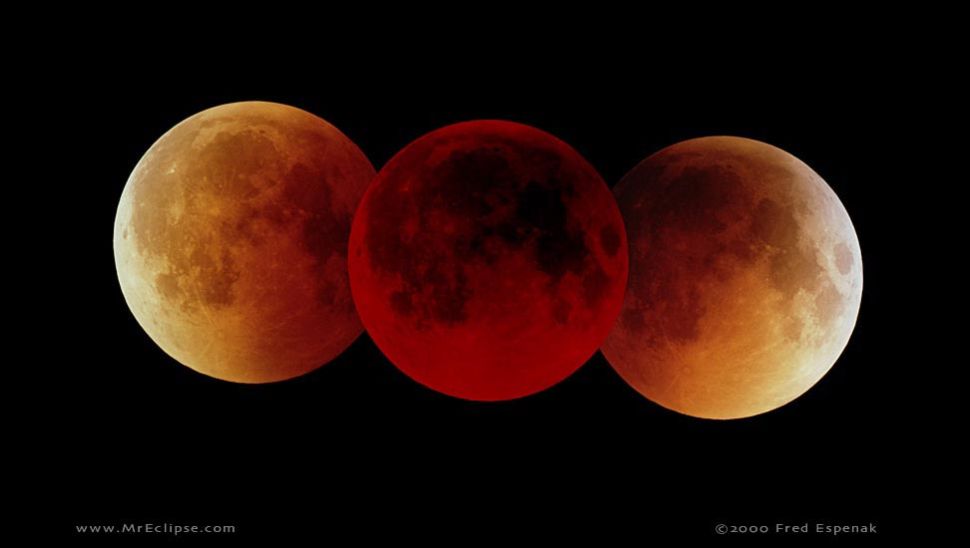