Although President Trump falsely claimed last week that construction on his long-promised wall along the U.S.-Mexican border was finally underway, Mexican-born, New York–based artist Bosco Sodi is actually at work building his own wall this week. His, however, is in London, just up the Thames from the new American Embassy. But unlike the president’s “bad hombre” border barrier, Sodi’s isn’t about keeping people out—it’s about bringing them together.

Muro (the word for “wall” in Spanish) as the work is aptly called, is part of Art Night, a one-night contemporary art festival that will be held on Saturday, July 7. Composed of 1,600 bricks fabricated in Mexico and individually signed by the artist, the 26-foot wall will be erected at London’s Southbank Centre. But the significance of the wall is not its construction, but rather its communal destruction. Over the course of the evening, visitors will be invited to disassemble the work brick by brick; they can even take a brick home with them to remember their contribution to the collaborative experience.

Sodi explained to Observer that Muro is a “social exercise,” one aimed at highlighting issues of political isolationism facing the U.S. in light of the current administration’s nationalist agenda. He first debuted the work in New York’s Washington Square Park last year, just after Trump announced his plan to end Obama’s Deferred Action for Childhood Arrivals program, a contentious decision that made minors brought illegally to the States suddenly eligible for deportation. “It was a politically tense moment, and very overwhelming. But I wanted people to remember that even small, individual acts can break down big political barriers,” he said.

The wall’s installment might have even more relevance now given that within the past month the Supreme Court upheld the president’s so-called “Muslim Ban” and the country—if not the world—has been outraged by the fact that infants and children were being separated from migrant parents at border detention camps. The U.K., too, is in the midst of tense Brexit negotiations this month, which have further ignited controversy over how the country will police its borders when it officially exits the European Union in 2019. “I like the way Muro continues to take on different meanings depending on its location and the recent events happening around it,” Sodi said.

Now in its third year, Art Night routinely commissions artists to create site-specific works and performances to highlight the architectural, economic and cultural nuances of various areas around the city. This year will focus on neighborhoods along the South Bank, from the cultural nexus of Waterloo to the industrial Battersea Power Station, through the historical LGBTQ hub of Vauxhall and the city’s newly developed business district, Nine Elms.

In addition to Sodi’s wall, this year’s edition of Art Night will feature 12 artists’ projects, many of which also address issues of identity and activism, such as Random International’s permanent outdoor commission titled “Self and Other (for Albert Embankment).” The event also coincides with the U.K.’s Pride weekend, so visitors are invited to the Royal Vauxhall Tavern for Duckie’s annual Gay Shame event, which will feature performances from Amy Lamé, Readers Wifes and The Pink Suits on the subject of queer futures.

Muro is being staged in the National Theatre’s plaza at Southbank Center in Waterloo, just up the riverbank from the new U.S. embassy at Nine Elms, which the president refused to attend the ribbon-cutting ceremony of earlier this year, deriding it as “lousy” and “horrible” because the location had been selected by the Obama administration. The wall’s debut in London is also poignantly poised just days before Trump’s planned visit to the U.K. on July 12. Indeed, mass demonstrations protesting the U.S. president are expected to pop up across the British capital city prior to his arrival.

“I can’t deny the timing is very lucky. It’s a complete coincidence but I think it will make the work more effective,” Sodi said, adding that current American and British isolationism only hurts those who believe walls are anything more than just a pile of bricks. 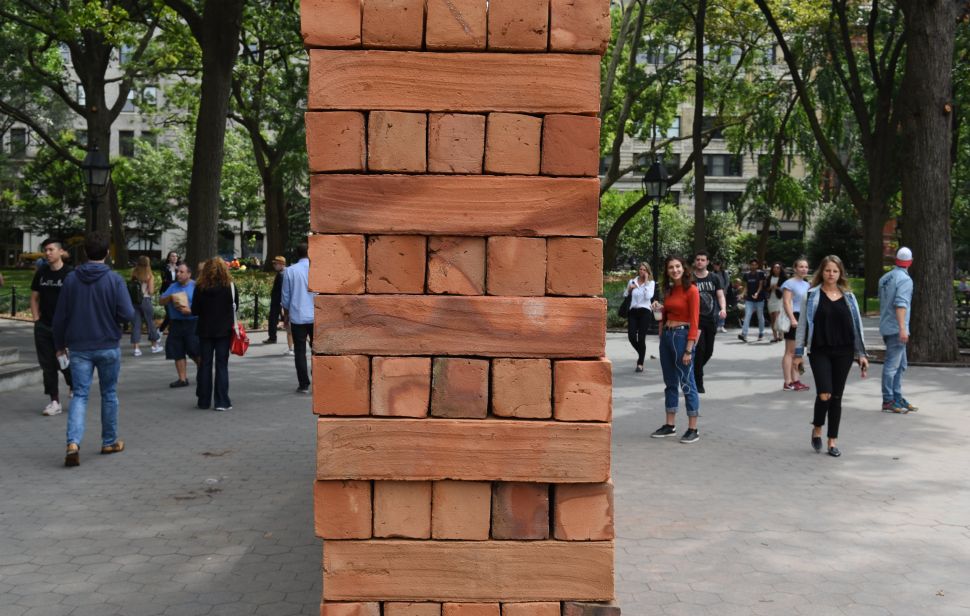