Publishing’s “Trump Bump” isn’t all it’s cracked up to be.

If you’re writing a book about modern politics, one shortcut to the bestseller list would seem to be President Donald Trump tweeting about your tome. He often trumpets books by White House colleagues and Fox News hosts.

The latest author to get Trump’s blessing is former White House Press Secretary Sean Spicer. On Saturday, Trump tweeted an endorsement of Spicer’s forthcoming book The Briefing: Politics, The Press and the President. The tell-all will be released by conservative outlet Regnery Publishing on July 24.

A friend of mine and a man who has truly seen politics and life as few others ever will, Sean Spicer, has written a great new book, “The Briefing: Politics, the Press and the President.” It is a story told with both heart and knowledge. Really good, go get it!

Theoretically, this missive from the president should have sent conservative readers flocking to Amazon to pick up Trump’s required reading.

But it turns out that wasn’t the case.

Before the Trump tweet, Spicer’s book was in 20,000th place on Amazon’s book chart. By Sunday morning, after the Trump promotion, it was around 2,000.

A tenfold increase is certainly nothing to sneeze at, but this wasn’t anywhere close enough to get Spicer on the Amazon bestseller list.

And things have only gotten worse in the past day.

According to NovelRank, which tracks book sales figures, today The Briefing is number 2,611 on Amazon’s American bestseller list. Only 68 people have purchased the book since the Trump tweet.

The story is even grimmer on the international charts. Spicer’s tome is at number 23,224 in Canada—it’s only sold four copies.

And in the United Kingdom, not one person has pre-ordered Spicer’s book.

While these statistics are certainly drastic, it turns out positive tweets from the president don’t usually move the publishing needle.

According to The Daily Beast, Trump has tweeted endorsements of more than 40 books since 2015. None of them have reached bestseller status, however.

Instead, the most effective medium for conservative authors to hawk their books is (surprise) Fox News.

Trump coincidentally often tweets about books after seeing authors on Fox & Friends. But it’s the TV appearance that moves the needle (however slightly), not the presidential endorsement.

Part of the problem may be the very general terms in which Trump tweets about literature. Sources told The Daily Beast the reason for that is Trump rarely (if ever) actually reads the book he’s promoting.

There is one area in which Trump helps the publishing industry, however: when he tweets against a book.

Trump hates when the media is critical of him, so of course he vents about it on Twitter. When his objects of scorn are books, they inevitably become number one Amazon bestsellers.

So far in 2018, the beneficiaries of Trump’s anger include:

Trump’s Twitter may not be entirely to blame for the implosion of Spicer’s story, however.

Unlike many other positive and negative portrayals of Trump, The Briefing is being released in the summer, when the publishing industry quite literally heats up.

And ironically, one of this summer’s biggest hits actually takes place in the White House

The President Is Missing, written by James Patterson and President Bill Clinton, focuses on a fictional Commander in Chief who foils a cyberattack on American soil. It sold almost 150,000 copies during its first week on shelves. 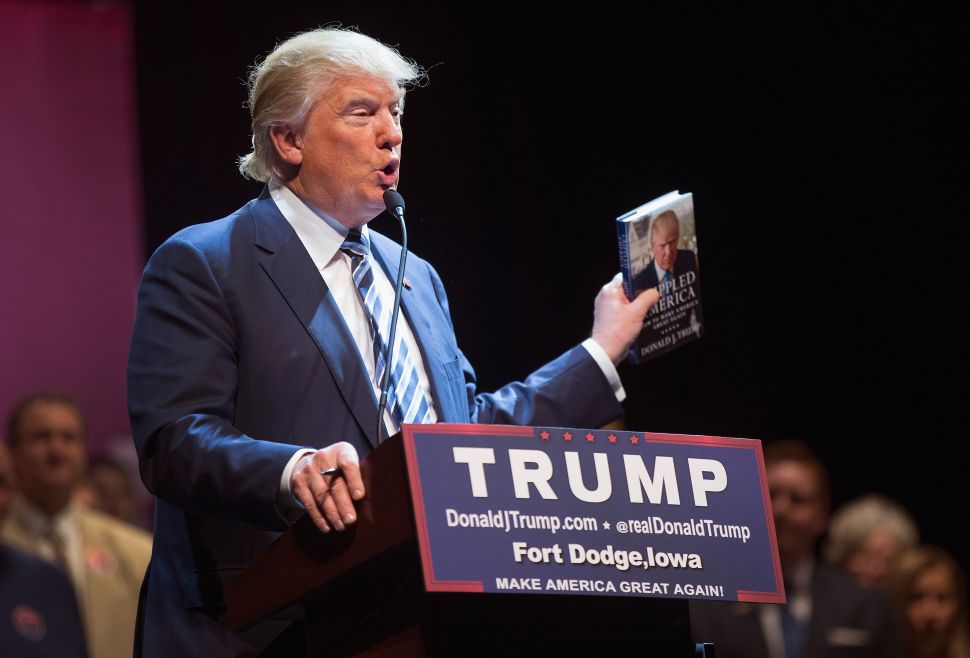