A quarter-century ago, Daniel Patrick Moynihan, the longtime Democratic U.S. senator from New York, caused a stir by coining an instantly memorable phrase: “defining deviancy down.” A son of Hell’s Kitchen, Moynihan was the rarest of creatures, a successful academic-turned-pol, and true to form he published his neologism in a scholarly journal, explaining that society’s permissiveness toward street crime and anti-social behavior ensured more of it. It captured the zeitgeist of the early 1990s perfectly, thus did “defining deviancy down” enter the public discourse, in a manner that present-day Democrats might find uncomfortable.

Donald Trump’s presidency, which will soon pass its 18-month mark, has been an extended exercise in Moynihan’s thesis applied to our national leadership. In practically every area, from White House ethics, to dubious ties to foreign governments, to personal takes on social matters, President Trump has delighted in setting new lows, saying things none of his 44 predecessors would have dared utter in public. He excels at trolling, and Trump seldom fails to stupefy his enemies in paroxysms of rage.

Under Trump, defining presidential deviancy down has become a sport of sorts, and every few days he’s sure to utter something that provokes outrage in some quarter of our society. Even by his standards, however, the president’s Thursday evening performance in Great Falls, Montana contained more than the usual ration of stunning utterances. A campaign-style rally of the sort Trump prefers, the Montana lecture encompassed a full array of statements that have been deemed hateful and downright dangerous by the mainstream media.

I want to now focus on just one of the president’s utterances Thursday evening, namely one about Russian President Vladimir Putin, whom Donald Trump will soon be having a one-on-one meeting with in Helsinki. This long-anticipated pow-wow between the American and Russian presidents is being viewed with widespread Western trepidation, given Trump’s well-honed habit of trashing American allies and alliances while mysteriously having nothing negative to say at all about the Kremlin boss—even though Putin’s recent years in office have been filled with outrages such as waging aggressive war on Russia’s neighbors, shooting down civilian airliners, subverting American elections, and unleashing a weapons-grade nerve agent on an English provincial city.

None of that seems to register in this White House, however, so on July 16, Trump will meet Putin solo, without any other personnel present on either side. That unusual diplomatic arrangement has spurred concerns, given how bizarrely the president’s recent Singapore summit with North Korea’s strongman went. In his own fashion, Trump sought to reassure his Montana audience that all will be well in Helsinki, media doubts about his competence to take the Kremlin boss on tête-à-tête notwithstanding. As he explained, with the full range of bizarre Trumpian hand-gestures and mocking voice alterations:

“They’re going, ‘Will President Trump be prepared, you know, President Putin is KGB and this and that’ … You know what? Putin’s fine. He’s fine. We’re all fine. We’re people. Will I be prepared? Totally prepared. I’ve been preparing for this stuff my whole life.”

There are only two unarguable facts in Trump’s statement. First, Putin is indeed a product of the KGB, which he joined in 1975, fresh out of university, and stayed in for 16 years, until the Soviet collapse in 1991. The influence of that experience on the Moscow strongman would be difficult to overstate. In office, Putin has surrounded himself with fellow KGB veterans, regularly peppering his speech with KGB tough-guy argot, and he still identifies as a Kremlin secret policeman, what insiders term a Chekist, in the marrow of his bones. “There are no ‘former’ Chekists,” as the Russian leader has said himself.

The other fact we learned on Thursday evening is the American president thinks that the KGB, and a career in it, are “fine.” This is frankly a jaw-dropping statement even for Trump. Let’s unpack this a bit. For Americans, thoughts of the KGB invariably turn to that agency’s storied First Chief Directorate, its foreign espionage arm. During the Cold War, the FCD was one of the world’s best spy services, and its operatives had no trouble penetrating the American government time and again. While it was not quite as cunning as far-fetched TV shows portray, the FCD was nevertheless a force to be reckoned with in the SpyWar.

However, foreign espionage was a tiny portion of what the KGB did down to its demise in 1991. Created as the State Security Committee in 1954, the KGB was the Soviet secret police. Its main mission was preserving Communist rule in the USSR. It was, as its logo displayed, both the sword and the shield of the Soviet regime. In other words, its job was killing, imprisoning, harassing, and generally making life miserable for Soviet citizens who objected to the Bolshevik regime in some manner (real or imagined).

The Soviet secret police went through a bewildering array of name-changes until settling on the KGB moniker, but its evil story began in December 1917, just after the Bolshevik Revolution, when it was created as the All-Russian Extraordinary Commission, or Cheka for short (hence Chekist). Birthed by the fanatical Polish revolutionary Feliks Dzierżyński, the Cheka enthusiastically embraced what it termed Red Terror against the enemies of the Soviet state. Iron Felix, as he was termed for his uncompromising cruelty, cared nothing about legal or ethical norms, and Dzierżyński unleashed a wave of state repression without precedent in human history—and it continued, one way or another, for 74 years, until the Soviet state imploded at the Cold War’s end.

The KGB and its antecedents killed and imprisoned on a scale never seen, creating a secret empire of camps, the notorious GULAG, which stretched across the Soviet Union. Even the briefest run-down of “greatest hits” is shocking. The initial Red Terror in the years after 1917 was followed by more expansive human rights violations under Joseph Stalin on a truly industrial scale. His dictatorship witnessed brutal “dekulakization” and the hunger genocide or Holodomor that struck Ukraine especially hard in the early 1930s, killing millions. Then came the Great Purge later in that blood-drenched decade, followed by various genocidal outbursts against undesirable groups during and after the Second World War.

After Stalin’s death in 1953, the Soviet secret police gradually stopped its mass murder operations, adopting more subtle methods of repression. By the time Putin joined its ranks in the Brezhnev era, the KGB preferred to put its enemies in psychiatric prisons (anti-Soviet sentiments were ipso facto signs of mental illness). Since the Putin regime has actively worked to hide Soviet crimes, it’s difficult to say how many people fell victim to the Soviet secret police, but the best guess is somewhere in the 20 million range. Some estimates go even higher—it’s impossible to say with any accuracy so long as the Kremlin keeps its archives sealed—but we can confidently state that the KGB and its predecessors killed considerably more innocent people than Adolf Hitler did with his Gestapo and SS.

You read that right. The KGB has more blood on its hands than even the SS, the creators of Einsatzgruppen and Nazi death camps. This is the organization that our president just publicly deemed “fine.” It does not bode well for the impending Helsinki summit that Trump has given imprimatur to one of the worst organizations in human history. This is a sort of deviancy that it’s difficult to watch any leader of a free country define down, yet that is just what Trump has done. The free world ought to be very concerned about what happens behind closed doors in Finland nine days from now. 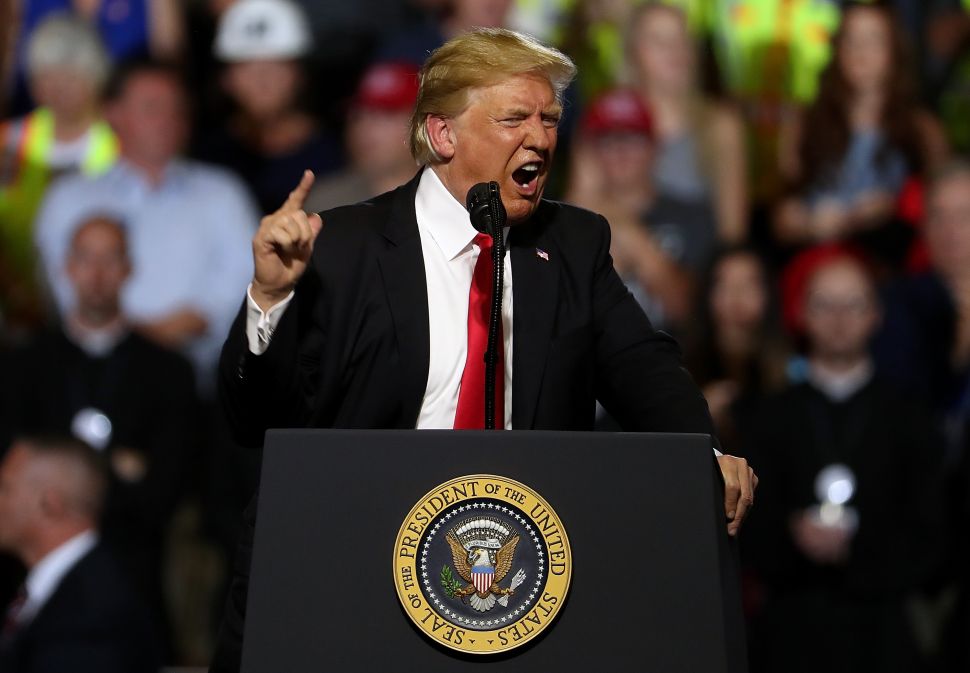