Soccer is finally kicking sexism to the curb—or at least it’s trying to.

According to The Irish Examiner, the anti-discrimination group Fare Network has been working with FIFA to reduce the amount of televised shots of young females at the World Cup games. FIFA’s diversity boss, Federico Addiechi, stated that FIFA  has told its broadcast service to end such practices. Though the termination has not yet been part of a proactive campaign, Addiechi stated: “This is one of the activities that we definitely will have in the future—it’s a normal evolution.”

The practice of showcasing attractive women at sporting events has perpetuated the stereotype of the “hot female fan,” who is scantily clad, model-esque and simply there to exist as eye candy. The technique, which is meant to spike viewership whenever there is a lull in a sports game, was pioneered in the ‘70s by American television director, Andy Sidaris, who referred to his invention as the “honey shot.”

In his 1976 documentary, Seconds to Play, Sidaris explained, “I got the idea for honey shots because I am a dirty old man. When I turned 17, I remember it was terrifying, every time I looked at a girl I would just tremble. And I thought if I’m like that maybe other people are like that. And you know what, they are.”

In 1983, New York Times writer Neil Amdur wrote, “Andy Sidaris is one of ABC’s better football directors. But at the Sugar Bowl, he seemed preoccupied with cheerleaders, in a game that contained dimensions of much more importance. Sideline shots of cheerleaders and majorettes are only worthwhile if they are spontaneous and fit into a larger picture; Sidaris made them boring and finally offensive.”

Yet Sidaris’ tradition has continued on.

One famous example occurred in 2013, when ESPN sportscaster Brent Musburger practically drooled over Katherine Webb, girlfriend of Alabama quarterback A.J. McCarron, after a camera zoomed in on her at the BCS title game.

“I’ll tell you, quarterbacks, you get all the good-looking women,” Musburger commented. “What a beautiful woman, wow!”

But what makes the World Cup a particular hotspot for this maneuver is the fact that it’s an international sporting event, and people love to compare the attractiveness of women of varying nationalities.

The result is a global beauty pageant.

Brazil most definitely have the most attractive female fans, by a country mile. I hope that’s not sexist.. or racist? :p

These blonde Russian women are the highlight of my World Cup 😍⚽️

Following the final whistle of the Sweden vs. England game, the Fox Sports cameramen panned in on three different women in the Swedish crowd who all had something in common—they were young, blonde and attractive.

“I’m just so sorry that so many beautiful women are so sad right now,” said sports commentator Ian Wright. Perhaps in an effort to curtail such creepiness, fellow commentator Alexi Lalas made it even worse: “Don’t worry, there are plenty of beautiful women who are happy right now.” Cringe.

Were Swedish fans hired from a modeling agency? pic.twitter.com/cmG2UAQpq6

The cameramen seemed to really like the female #Swedish soccer fans.#EnglandvsSweden #WorldCup2018

The proliferation of the “honey shot” speaks to a larger issue of sexism at the World Cup. Last month, Burger King Russia announced that it would offer a lifetime supply of Whoppers to any woman who was able to get impregnated by a player. Two weeks ago, Getty Images was forced to apologize after publishing a gallery of the “sexiest World Cup fans”—which, unsurprisingly, were all women.

The #WorldCup⁠ cameramen are the real heroes in Russia. pic.twitter.com/mALegq0wet

The Fare Network’s executive director Piara Powar said his team has “documented more than 30 cases” of mainly Russian women being “accosted in the streets” by male fans but believes the real number of incidents is likely to be “10 times this.”

The tournament has also seen several cases of female journalists being harassed while reporting for international media outlets.

On June 15, Colombian journalist Julieth Gonzalez Theran was reporting for German broadcaster Deutsche Welle when a soccer fan grabbed her chest and kissed her. Three days later, Malin Wahlberg was interviewing a crowd of Swedish fans when one man ruffled her hair while another grabbed her around the neck and tried to kiss her. Mexican journalist Mariana Zacarias told the French magazine Paris Match about being groped, kissed and grabbed within the first two weeks of the competition. On June 24th, Julia Guimaraes, presenting for Brazil’s TV Globo and sporTV, dodged a man who tried to kiss her on the cheek and gave him a piece of her mind.

Great response from Brazilian TV journalist Julia Guimaraes of Sportv to unacceptable behaviour. Not easy to show such restraint in the face of harassment. pic.twitter.com/eFVZz6gdMA

But it seems Addiechi’s early efforts have proven to be effective.

Tuesday’s France vs. Belgium match featured shots of, almost exclusively, middle-aged men wearing devil horn hats. There was also an appearance from Mick Jagger and a little boy with a French flag painted on his cheek who was given not just one, but two, on-screen appearances.

The death of the “honey shot”—whether it turns out to be permanent or only temporary—is a sign that people are becoming increasingly aware of female objectification in the male-dominated world of soccer.

The online community This Fan Girl has started a #WeAreFemaleFans campaign that is to document the variety of women who attend matches across England. Their aim is to “change the face of female football fans on the internet.” But perhaps the biggest proof of progress occurred in Iran, where women—who have been banned from even entering a stadium since 1979—were finally given the opportunity to participate in showing support off-the-field.

Hopefully, the move towards diverse crowd shots will allow women to engage in sporting events on their own terms—and not within the parameters that men have defined for them. 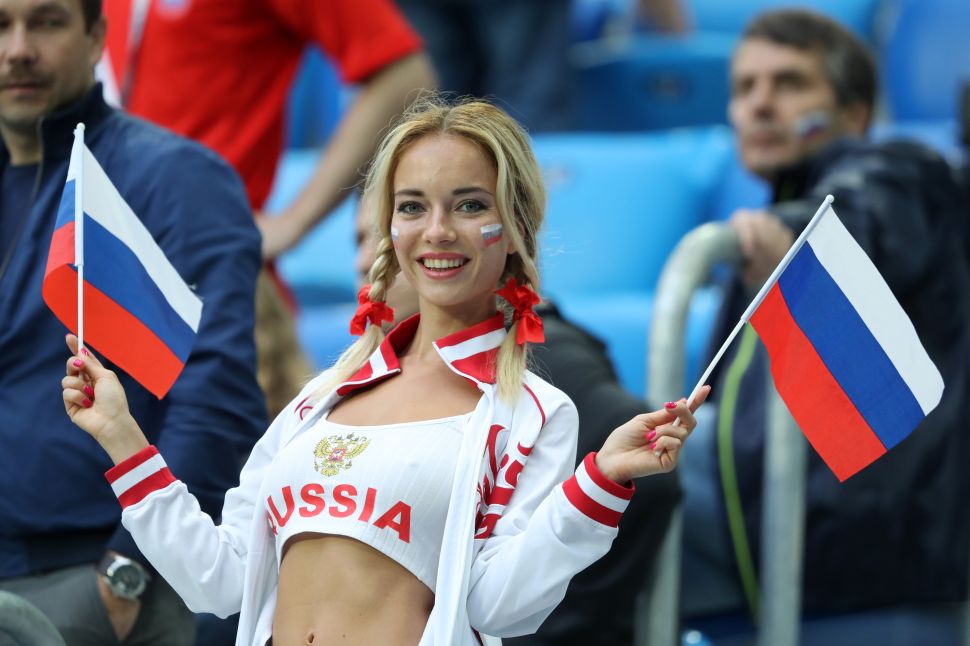