“How much can you know about yourself if you’ve never been in a fight?”

That’s the question Tyler Durden (Brad Pitt) asks the narrator (Edward Norton) in Fight Club, and dudebros have never tired of quoting it when examining their own masculine bona fides. But that’s all a lot of empty talk. Few people have the intestinal fortitude much less the fighting opportunity to win what Theodore Roosevelt called the “splendid ultimate triumph” that goes to the person “who does not shrink from danger, from hardship, or from bitter toil.”

I wound up fighting for money. It wasn’t supposed to be that way when I first appeared on Road Rules in 1998. I was hungry for attention and an opportunity to see the world, but I wasn’t planning to get down and dirty with castmates in order to earn my paychecks. Sure, I had been chosen along with future NFL star LaVar Arrington as a “featured athlete” at my high school, but this was a reward for my high-energy work as the team mascot.

However, the format of Road Rules, and reality television in general, gradually evolved into Survivor and Fear Factor-inspired showdowns. For MTV, this was a good way to utilize the ever-expanding pool of former cast members: they could be recycled endlessly and pitted against each other on The Challenge, a seemingly immortal game show that launched its 32nd season this month.

As I’ve written before, reality television was an exploitative and at times abusive business. But back in the mid-oughts, I was a graduate student in need of a steady revenue stream as well as a pragmatic Rust Belt native who would never pass up the chance to make a buck. As The Challenge evolved into a performance-driven endeavor, I came to view it the way my father viewed the lottery: a 50/50 proposition in which you either won or you didn’t.

And I won a lot. I was a very good player in every respect, whether that meant refraining from the temptations of excessive alcohol consumption or avoiding intimate entanglements with castmates. But solving puzzles, staying sober, and eating bugs was one thing; beating the crap out of someone was another. Or so I thought.

The year was 2009, and I was in Phuket, Thailand filming what was then called Real World/Road Rules Challenge: The Ruins. The show was set up so that for each challenge your team won, you banked money in your “personal bank account,” then if you went in “the Ruins” and beat someone you stayed on the show, but you also inherited their personal bank account.

After I had already banked $13,293 in my personal bank account, I was slated to face Kimberly Alexander from Real World: Hollywood in a Ruins event called “rag doll.” Kim had $8,214 in her bank account already, so if I won, I’d have pushed my earnings over $20,000 and Kim would be heading home with nothing to show for it but her weekly salary.

Fine, sure. That’s how the cookie crumbles in these things. It’s always 50/50; you win or you lose. But the nature of the event was unlike anything I’d encountered before, and I’d already done some pretty strange stuff.

When Kimberly and I arrived at the Ruins set, we were asked if we would wear bathing suits. We said no, and they took that no for an answer. Honestly, I’m surprised they asked permission because usually they just told us what to do and we had to do it.

Former BMX star and The Challenge host T.J. Lavin explained the game, which was to follow a best out of three format—though viewers watching the final cut won’t learn it was best out of three—and required us to try to yank a thick rope away from the other player. The area in which we were to compete was a circle constructed out of industrial-strength rope. In the center of the circle was a bulbous metal object (the producers realized after our brutal round that having a protruding metal prop in the middle of a wrestling ring wasn’t safe, so they removed it for the boys’ tug-of-war). Kimberly and I were not given knee pads, elbow pads, a helmet or gloves.

This was about as pure as a physical competition could get. I knew in my heart that I couldn’t afford to lose: I wanted Kimberly’s $8,000 and I wanted to stay on the show. When the tug-of-war began, a metal pipe rigged above the set started spraying on us. Apparently, this is why we had been asked to wear bathing suits. I suppose it was meant to resemble the sort of Jell-O and vaseline fights taking place among WWE Divas such as Sable and Torrie Wilson at this time. Even in our loose Under Armour apparel, the battle was appealing enough to male cast-mates that they described it in interviews recorded afterwards as a “wet dream come true” and a “real-life porno.”

Those stupid comments offer a nice snapshot of turn-of-the-century toxic masculinity, but the actual fight was nothing like that. It was a miserable back-and-forth that lasted an hour and involved me repeatedly lifting and slamming Kim to the ground. To her credit, Kim refused to let go of the rope. Her will to win this prize was impressive and gave me a sense of how absolutely batshit crazy all of this was. Would we be doing this if $1,000 were at stake? If $100 were? Would we do it just for the exposure, as so many artists and creatives do?

I was in a true knock-down, drag-out fight, and during that hour of combat, I learned plenty about myself. Kim was a nice person, but in this setting, she was chum in the and I was the great white shark. Watch the video; I beat her from pillar to post before ripping the rope from her small hands. It’s a (wo)manhandling of epic proportions and yet, bloody and unbowed, she refused to let go. As we struggled, the thoughts continued to run through my head: would I fight my sisters for $8,000 dollars? Other family members? A distant cousin, maybe? My will to win, at least in that moment, was indomitable. No one could withstand my fury.

An hour later, I was completely exhausted, but my victory was complete, too. Poor Kim was going home, perhaps with lingering back problems from a stupid and unsafe event the producers had dreamed up because they had no idea how dangerous it would be to pit two untrained combatants against one another in a do-or-die brawl. I went on to win the whole show, earning $63,507 plus my weekly salary and even besting my podcast co-host Sarah Rice in the show’s final challenge. Out of 32 players, I had earned the most money. I was a prize fighter and I had kicked all their asses.

This doesn’t make me some great feminist hero or “tough woman” or whatever. I’m still not entirely sure how to process my own answer to Tyler Durden’s question. I do recognize that I am from a large Pittsburgh family in which you can’t afford to show weakness in the face of harsh criticism. I had to be tough; I had to throw it back at my siblings and sometimes at my classmates.

Honestly, unless you were a bubble person in your teen years, someone was going to push you to the point where you either had to throw down or suffer total humiliation. If you just took it, peers could tell—and they would exploit you accordingly. Of course, Kim and I were both being exploited by the producers, who roped us (literally!) into a fierce struggle that also amounted to a “wet dream come true.” And yet we each showed our toughness and fought for an hour, scraping and tearing at our bodies for what in retrospect seems like a rather measly eight grand.

One realization I came to is that, as much as we should all be praised for fighting back and being uncivil, we often end up directing our anger at one another instead of the big bosses and power players who put us there. Kim and I engaged in a bitter, brutal “girlfight” that titillated men, when we should’ve been working together to shame our producers for putting us in this position in the first place.

And this is the worst thing about competition, about prize fighting: all too often, you’re fighting the wrong people for the lowest stakes. 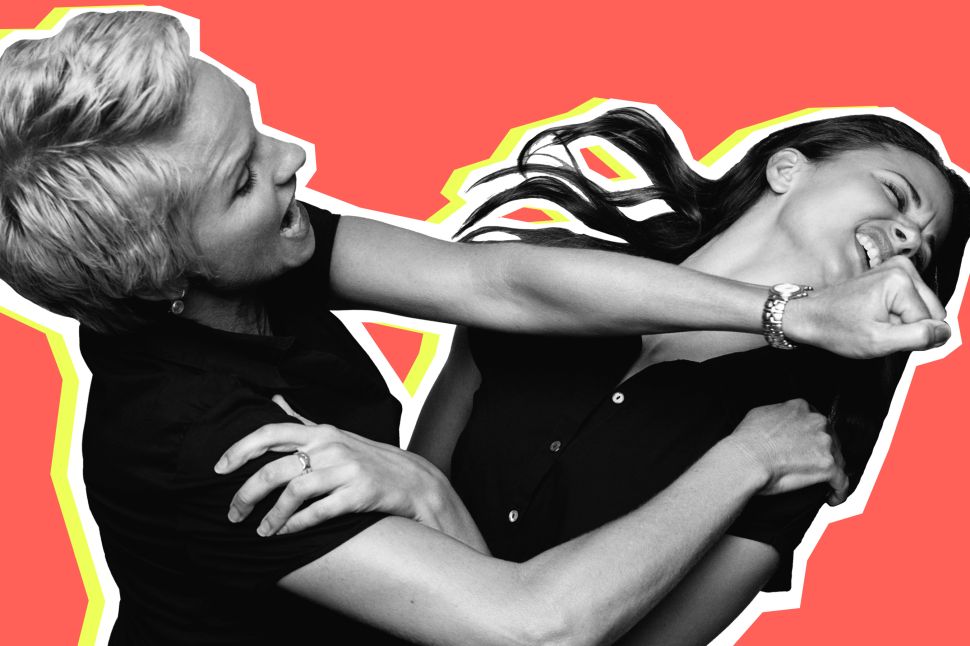