This was quite the Broadway bargain.

Last night, producers of the upcoming Broadway musical Gettin’ the Band Back Together, which begins previews July 19 at the Belasco Theatre, scrambled to correct a massive error they posted on Telecharge.

After the update, it appeared that tickets for every available seat in the house at every performance through August 17 was only $16.95. Many of those deeply discounted seats should have been listed with a price of $169.50.

The error apparently originated with one of the show’s producers. The incorrect prices were listed online for over four hours.

“When we were alerted to the issue, it was immediately corrected,” Ken Davenport, the lead producer and co-author of Gettin’ the Band Back Together, told Forbes. “We will, of course, honor any tickets purchased at the lower price.”

Davenport has not responded to Observer requests for comment.

But while the plan to honor $16.95 tickets is good customer service, it doesn’t really make business sense for the production.

Accepting tickets at lower prices means the show’s box office revenue will be lower, and thus it will have to remain open even longer to break even.

That’s a particular problem for Gettin’ the Band Back Together. The show has a pretty simple plot (a high school garage band reunites 20 years after its split), but it’s capitalized at an absurdly high $12.5 million.

This eyebrow-raising sum is more expensive than recent Broadway hits like Come From Away ($12 million), An American in Paris ($11.5 million), A Bronx Tale ($10 million), A Gentleman’s Guide to Love and Murder ($7.5 million) and Fun Home ($5 million).

A Broadway musical is considered a success if it recoups its investment, or makes twice as much money as it cost to produce. Only about 20 percent of shows reach this milestone.

And since Gettin’ the Band Back Together would have to rake in $25 million to be considered a success, it’s highly unlikely it will join that list—no matter its ticket prices.

Even the show’s producers seem to realize this, because while the $16.95 deal was a mistake, they’ve released other cheap ticket options.

Single tickets for Gettin’ the Band Back Together start at $39, a low figure on Broadway to begin with. And during previews (through August 13), anyone who buys one regular priced ticket gets one free.

Discount ticketing sites like TDF are also offering seats at Gettin’ the Band Back Together for $49.

Broadway chat board users, a notoriously catty bunch, are having a field day with all these glitches.

“How on God’s green earth is this production planning to have any sort of sustainable financial stability?” one person wrote. “They have to be making as much money per performance as I would if I walked down 44th Street and picked up spare change on the sidewalk.”

“I’ve spent more than that at Burger King!” another user added.

Can the show overcome these pitfalls and become a success? We’ll find out once the curtain rises. 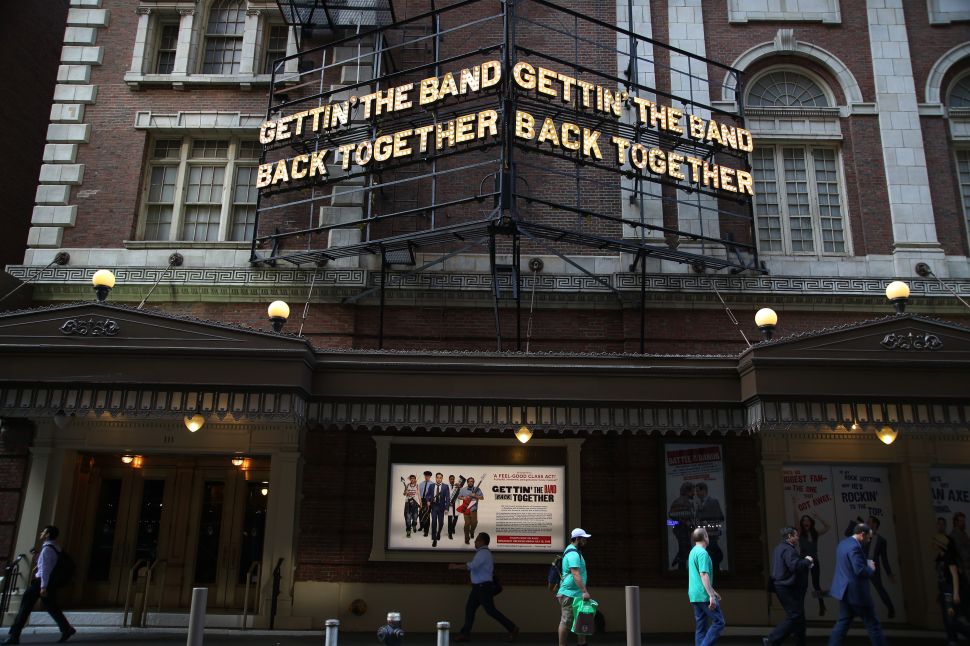