Someone should make a movie about the wild peaks and valleys of M. Night Shyamalan’s movie career.

The filmmaker exploded into Hollywood with 1999’s stellar The Sixth Sense, drawing rave reviews and immediate comparisons to Steven Spielberg. His early filmography showed plenty of promise and a capable propensity for suspense and twists, the types of adult thrillers that have sadly fallen out of favor in recent years. But anyone who follows the industry already knows that Shyamalan quickly fell off the map with a string of laughable misfires.

From 2006 to 2013, Shyamalan couldn’t hit if he fell out of a boat: Lady in the (25 percent on Rotten Tomatoes) The Happening (18 percent) The Last Airbender (six percent) and After Earth (11 percent) were all expensive flops that drew universal criticism.

Just like that, Hollywood’s new-age golden boy had become a punchline and, more critically, box office poison. You would have been forgiven had you believed that his career was more or less over at the time.

But then something funny happened—Shyamalan returned to the smaller-scale films that earned him some shine in the first place and began to make good and profitable movies again.

The Visit, a 2015 horror thriller about two siblings who become increasingly frightened by their grandparents’ disturbing behavior while visiting them on vacation, was made for just $5 million yet earned just a hair under $100 million worldwide. It also scored well with audiences and managed to earn a solid 65 percent on Rotten Tomatoes. But it was last year’s Split that really brought Shyamalan back into the mainstream; it was one of the most profitable films of the year with nearly $279 million off a tiny $9 million budget. It scored a 76 percent on Rotten Tomatoes and, more importantly, revealed itself to be a backdoor sequel to Shyamalan’s 2000 sleeper Unbreakable.

Unbreakable didn’t break out as hoped at the time with less than $250 million worldwide off a $75 million budget and mixed reviews. But the film was far before its time as a hyper-realistic, slow-moving and grounded superhero tale about a man coming to grips with his amazing abilities. Remember, this came just a few months after X-Men and two years before Spider-Man, when the superhero genre was still in its embryonic stages. Shyamalan was warned by studio executives not to market the movie as a comic book film, but given the superhero landscape today, Unbreakable has only gotten better in hindsight.

Over the years, it has morphed into something of a cult classic with ardent supporters and without its serious take on what was previously considered light material, we may have never gotten Christopher Nolan’s Batman Begins.

Now with Glass, which will unite the casts of both movies and throw Bruce Willis, Samuel L. Jackson, James McAvoy and Anya Taylor-Joy together for a trilogy-capper, Shyamalan has the opportunity to cement his comeback in Hollywood.

Universal debuted the first trailer for the two-decades-in-the-making sequel at San Diego Comic Con this past weekend, resulting in the kind of hyped attention Shyamalan hasn’t experienced since his first few years in the mainstream. Although the trailer’s tone hews closer to the eerie horror elements of Split rather than the naturalistic vibe of Unbreakable—I was hoping for the reverse—Glass looks like it could potentially be great.

Shyamalan still looks to be playing in a realistic sandbox; Sarah Paulson‘s Dr. Ellie Staple is a psychiatrist who works with people who believe they are comic book characters. According to her, it’s a growing field that includes her three current patients: Elijah Price (Samuel L. Jackson), Kevin Wendell Crumb (James McAvoy) and David Dunn (Bruce Willis). (Shot in the dark: Paulson’s character could be a secret super struggling with her own abilities. Nothing in the trailer suggests that, but it’s just a vibe I’m getting.)

From what we can tell from the teaser, Dunn has mostly stuck to the shadows and refrained from announcing himself to the world à la Superman. But clearly he’s become a known quantity in some capacity as he’s locked up with Crumb and Price.

How would the world realistically react to these individuals? Would authorities fear them? Would citizens support them? Would they ever be believed?

These are the questions Glass seems to be hinting at, especially with Price’s stated desire to reveal themselves and their abilities to the world. This is what is so interesting about the entire genre—mankind’s appointment with the incomprehensible. There are social, economic, political and religious undertones with being confronted by a higher power.

Shyamalan made a superhero movie that Hollywood wasn’t ready for the first time around; in his follow-up, he made a secret super villain tale that we didn’t recognize until the end. Now, he’s going back for a third feature that looks to play with traditional conventions of comic book pictures—the movie is notably titled after Jackson’s character—and connects these seemingly disparate threads together. The prospect of it all should be exciting for movie fans, especially those who embraced Unbreakable 18 years ago. It’s a trilogy we never thought we would get delivered in the most surprising of ways.

Shyamalan may never live up to those lofty Spielberg comparisons, but if Glass delivers, he will have cemented his improbable Hollywood comeback. 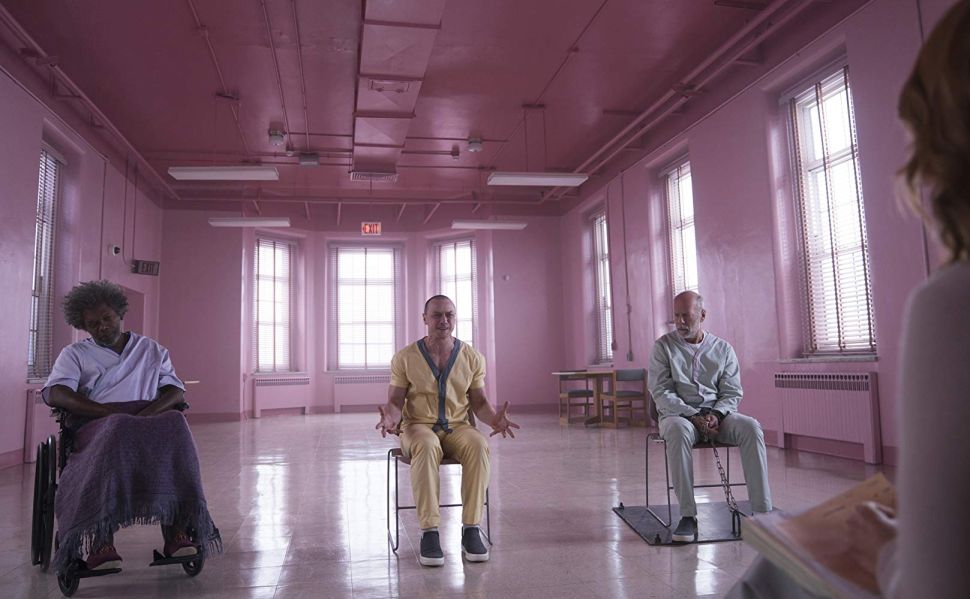