Shortly after the AT&T and Time Warner merger was approved, WarnerMedia head John Stankey reportedly told employees at a town hall meeting that HBO faces a “tough year” as it works to “alter and change direction a bit.” He wants to see the premium cable network “get bigger and broader” in order to better compete with Netflix. That opened the door to a host of possibilities on how best the premium cable network can take on the dominant streamer, especially with an infusion of resources coming its way following the merger.

But on Wednesday at the TCA Summer Press Tour, HBO president of programming Casey Bloys seemed to downplay any such shifts in approach.

“There are no plans to dilute the HBO brand in favor of volume of programming,” he said. “No one has asked us to not do what we do which is curate excellence. [HBO CEO] Richard [Plepler] has been very vocal about the need for more investment.”

He added later: “I believe we can do more quality programming. The question is how much more without losing that touch. What’s the right level with this increased funding?”

Regardless of the somewhat conflicting narratives being spun by the higher-ups, it seems clear that HBO will be taking some bigger swings in the future. That “increased funding” needs to be funneled into something high-quality and splashy, after all. To that end, Damon Lindelof’s Watchmen adaptation, which will presumably follow a group of costumed crime fighters in a world where vigilantism has been outlawed following extreme opposition from the public, is the perfect big bet to launch HBO forward into the blockbuster content battle.

(Yes, I realize Lindelof’s Watchmen has been in development since before AT&T acquired Time Warner, but at this point, it’s only been given a pilot order. That means if HBO likes what it sees from the first episode, there’s still an entire season to mold into the next mainstream takeover hit.)

Television currently supports more than a dozen live-action superhero TV shows (it’s a hot genre that HBO is smart to dip a toe into), and while they all run the gamut in terms of genres and tone, none can match the potential of Watchmen, which is based on arguably the greatest graphic novel ever written.

Watchmen was one of the first comics to explore how society would realistically respond to the existence of superheroes and how that shift in power dynamics would play out in relation to the masses, federal agencies and world conflicts. It is a deconstruction of the mythology pop culture has held in such high regard ever since Superman was introduced 80 years ago. It is darkly satirical and deeply philosophical and meant to unsettle audiences. No other superhero show is occupying that territory or even trying to, setting Watchmen apart from all of its contemporaries. It seems increasingly relevant in today’s polarizing and bleak times with direct parallels to xenophobia, distrust of authority and public division.

But we don’t know what exact form Lindelof’s version will take.

“This story will be set in the world its creators painstakingly built… but in the tradition of the work that inspired it, this new story must be original,” Lindelof explained on Instagram back in May. “It has to vibrate with the seismic unpredictability of its own tectonic plates. It must ask new questions and explore the world through a fresh lens.”

There’s no better creator and showrunner working right now who is more equipped to branch off the existing Watchmen source material with fresh new ideas than Lindelof. His criminally under-watched and underrated HBO drama The Leftovers was adapted from Tom Perotta’s novel of the same name, and the series took a massive leap forward in quality after burning through its direct adaption. Once Lindelof and company began telling original stories in season two, The Leftovers was elevated among the very best television shows in recent memory. That experience will help the showrunner stay true to the carefully constructed world of the graphic novel while revamping the material for a new medium and audience.

And it couldn’t be coming at a better time for HBO.

The final season of Game of Thrones is expected to premiere in April 2019; Westworld is on another year-plus hiatus; and the first Game of Thrones spinoff won’t arrive until 2020 at the earliest. There’s a void opening up for a buzzy attention-grabber that also doubles as a broad appeal attraction. In that sense, Watchmen just feels like it has more potential than Big Little Lies.

Forget Zack Snyder’s 2009 big screen adaptation (which I actually like), which proved to be divisive among audiences. Lindelof’s version has the opportunity to do real justice to the spirit of the original while emerging as a new offering in the genre. Given the reverence of the source material and the popularity of superheroes at the moment, Watchmen already has a considerable built-in audience that HBO can count on, similar to how book readers quickly hopped aboard Game of Thrones‘ bandwagon. The timing is perfect and Lindelof’s star is riding high.

Watchmen isn’t a superhero story in the vein of Superman’s up-up-and-away optimism; its gaze is cast more downward to the lowest rung of humanity. That’s what makes it the ideal competitor to something like Netflix’s Stranger Things, that’s what makes it such a fascinating big swing gamble for HBO. 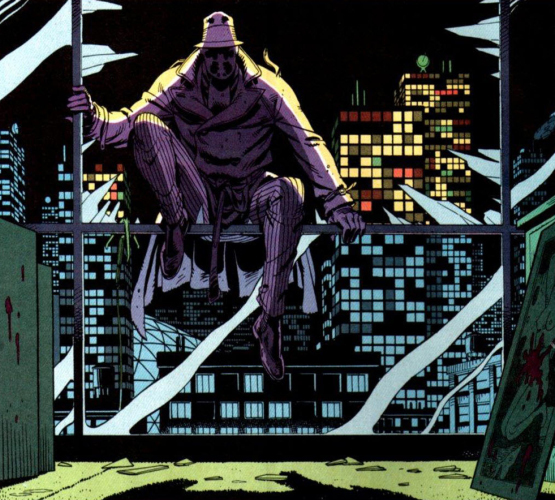