Break me off a piece of that… marriage proposal?

On Tuesday, journalist Evan Wilt got engaged to his girlfriend of a year, Weekly Standard reporter Haley Byrd. But thanks to Twitter, his proposal had a little extra Hershey magic.

It all started in May, when Byrd tweeted out this photo of her boyfriend’s first Kit Kat bar.

“I don’t think I’ve ever had a Kit Kat before,” my boyfriend remarks before doing THIS pic.twitter.com/UQbuD3Etpg

The photo immediately went viral, netting over 4,000 retweets and nearly 35,000 likes. Many diehard candy lovers said Wilt’s action was grounds for a breakup.

“Evan was homeschooled, and he doesn’t like chocolate,” Byrd told Observer. “What he did was completely organic.”

Wilt added that he was “very confused” by the passionate response.

But the internet infamy soon worked to his advantage. Hershey sent the couple a care package with printed instructions showing the proper way to eat a Kit Kat.

The company also reached out to Wilt privately, however, offering to help if he decided to propose to Byrd.

Wilt was planning to do just that, so he worked with Hershey on a plan to pop the question.

Hershey enlisted the services of Voxel Magic, a 3D printing company which created a personalized ring box in the shape of a Kit Kat.

Voxel founder and owner John Arzayus told Observer that his company printed three different box designs, painting them to match the Kit Kat color. When they decided on the final print, Arzayus bought a ring from Macy’s costume jewelry collection that Wilt could use as a dummy if needed.

The whole package was held together by double stick tape similar to what Hershey’s uses in Kit Kat wrappers.

A Hershey marketing representative approved the design Monday before sending the box to Washington, D.C. The entire project, from the blue models (at the top left below) to the actual proposal, took four days.

Wondering how @EvanWilt_ popped the question to @byrdinator in a Kit Kat? From 3D printing to a lil Kit Kat magic, we were happy to give him a break and help with his proposal! Congrats again you two ❤️🍫💍 pic.twitter.com/qzOxvHGZm8

On Tuesday, the big day came. The couple met their families at the Jefferson Memorial, ostensibly to take some touristy photos.

But then Wilt got down on one knee and pulled out the Kit Kat. There was a moment of panic when he initially couldn’t get the wrapper off.

“I was just standing there watching as he awkwardly opened the bar,” Byrd said. “I kept saying ‘Are you serious?'”

He still doesn’t know how to eat a Kit Kat pic.twitter.com/hEOzmWqAMY

Wilt eventually got the box open and popped the question. He didn’t have time to put the real ring in the Kit Kat box, but he pulled it out of his pocket as soon as Byrd opened the candy bar.

After she said yes, Hershey helped the couple celebrate with a Kit Kat engagement cake.

For the record — Kit Kat cake is amazing. Thanks for making our engagement so special, @KitKat_US! pic.twitter.com/VdFUJUAdJe

As someone who covers the Trump White House, Byrd is no stranger to going viral. But she said the Kit Kat tweet had paid the most dividends.

“This one is definitely special because of the way Evan used it,” she said.

For his part, Wilt doesn’t mind being “the Kit Kat guy.”

Wilt couldn’t help chuckling when he said this.

“I’ll be practicing that line for the rest of my life,” he said. 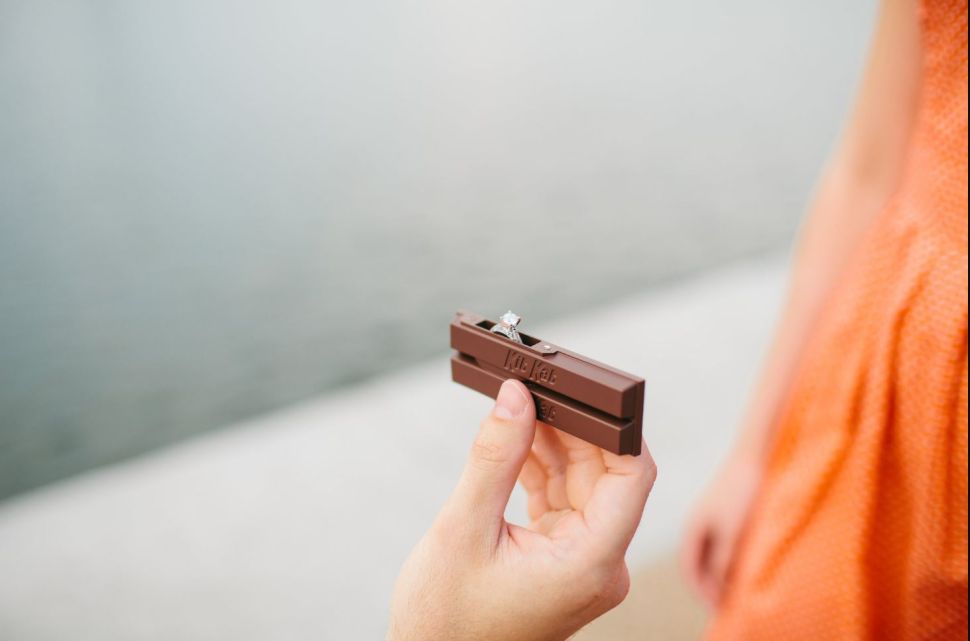