The world is already a toxic place where any kind of sane future is newly threatened daily, so why, in a summer heat wave of ugliness and political danger, do we deserve yet another dumpster fire with delusions of grandeur as nauseating and stupid as a sequel to the monumentally inconsequential Mamma Mia!? Call this embarrassing dog’s dinner Mamma Mia! Here We Go Again or just call 911. Either way, it is nearly two hours of relentless, plotless, artless junk.

Considering the tack-on taste a majority of summer movie escapists live with, an inevitable gang of misguided kids will probably welcome more cornball songs by the Swedish pop group ABBA, happy to join a wasted cast of thousands all bumping, jerking, twitching, and jumping up and down like spastic pelicans while pretending to have fun, but the alleged professionals in the cast who actually seem to relish trashing their craft for money look like they just woke up in a bed of red ants.

How can so many accomplished people turn out a microwave musical so bad it makes karaoke look positively adventurous? Let me count the ways.

Absence of anything remotely approximating a story line? Check.

Banal to the bone dialogue? Check. (Christine Baranski actually is forced to say: “Be still, my beating vagina!”)

Direction that looks phoned in from the West Indies in the rain? Check.

Wasted actors who should have stayed in bed but came out to pay their mortgages while enjoying a paid vacation? Check.

Millions of hors d’oeuvres that look like they were catered by the chef of a Five Napkins Burger in Bosnia? Check, check, check.

You could write the story on the head of a darning needle, which is exactly what British writer-director Ol Parker (The Best Exotic Marigold Hotel) has done. If you’ve been subjected to one of the 170 staged productions of this curious tourist attraction in eight different languages, you must know the first Mamma Mia! was about a disgraced flower child named Donna (a hopelessly miscast Meryl Streep) who, after leaving Oxford in 1979, ended up in a rotting shack on the Greek island of Skopelos, built a hotel, and started a rock band of no distinction called Donna and the Dynamos.

While she was at it, Donna also had a baby without ever figuring out which one of her three lovers (Colin Firth, Pierce Brosnan, Stellan Skarsgard) was the actual birth father, so they all shared equal responsibility. The time frames are all mixed up, so when the sequel begins Donna has been dead, making Meryl Streep the luckiest member of the cast since she only appears for about 20 seconds in the final scene as a singing ghost. (Smart girl, Meryl.)

Most of the work cut out for her is handled instead by a younger version of Donna played by Lily James. Meanwhile, Dead Donna’s daughter, Sophie (a huge waste of the talented Amanda Seyfried), has spent the past 10 years building a hotel called the Bella Donna (oy) in her mother’s memory, to serve as the backdrop for her own wedding to her boyfriend Sky (Dominic Cooper).

But on the grand opening gala, a hurricane destroys the hotel, Sky announces he’s walking out, and in the middle of the muddle who should arrive unannounced but Sophie’s grandmother Ruby, played by—wait for it—Cher, who looks like somebody dumped her head in a barrel of hydrogen peroxide and left it overnight. Everybody screams “Dynamite, dynamite, sleep all day and whoop all night…”

But why go on? This movie is a shambles that is meant to be looked at with your mouth wide open.

The Greek island has been replaced by Bosnia (!) where it rains constantly. Sophie is still looking for the right DNA. Instead, she gets pregnant, too, by the returning Sky. The grandmother realizes she once had a torrid affair with the hotel manager (Andy Garcia, of all people). To add confusion, the three men and three women playing the protagonists in 1979 often waft in and out of the same scenes with the six people playing them as grownups. You never know who or where anyone is at any given time. They all look tormented and stressed, they all sing out of tune, and the one requirement for the chorus line seems to be a club foot. But no one is as awkward and foolish as Pierce Brosnan, who sings like a dial tone.

Edited with a blowtorch, on the rare occasion when anything resembling a scene threatens to amount to something, the dominant theme emerges again: When in doubt, sing another terrible song. Bring earplugs. 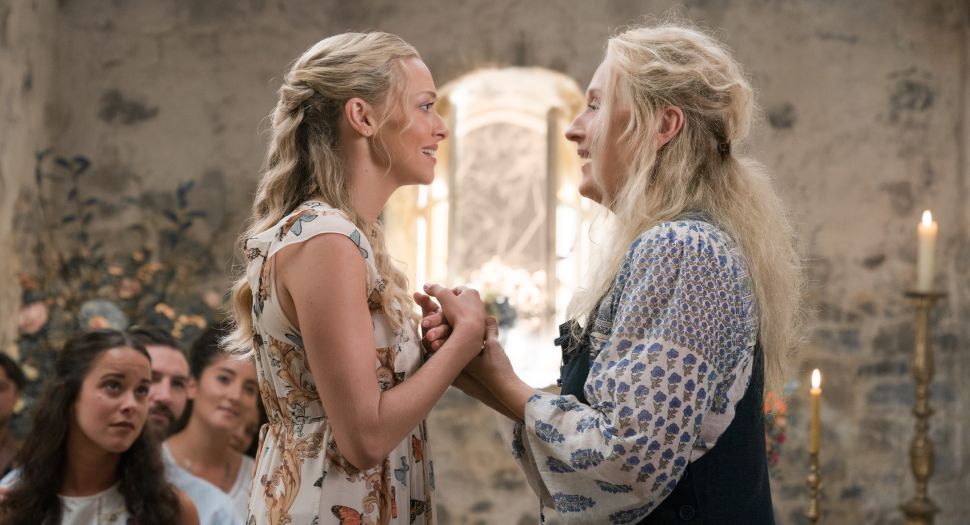