The wasted lives of unhappy women have always been an important staple in the careers of great actresses in wide-ranging movies, including Shirley Booth in Come Back, Little Sheba, Joanne Woodward in Rachel, Rachel and Charlotte Rampling in the recent Hannah, to name a few. Now there’s a new one—poignant and quietly powerful and more positive than most: Puzzle touched me profoundly.

Directed with assurance by Marc Turtletaub, best known as the producer of the popular Little Miss Sunshine, with a sublime performance by the excellent, underrated Scottish actress Kelly Macdonald (No Country for Old Men and the Boardwalk Empire TV series), it’s the melancholy (but never melodramatic) study of a bland woman from Connecticut with a penchant for cardigans who finds a new lease on life through jigsaw puzzles.

Agnes is a wife and mother who has spent so much of her life dusting, vacuuming and preparing meals for people who don’t appreciate her that she no longer has any clear understanding of who she really is, was, or wants to be. During the day she cooks and cleans and manages the house for a husband and two sons who take her every move for granted and at night she lies awake listening to her husband Louie’s snoring. Every morning the alarm clock goes off and another day begins, exactly like the one before, except for afternoons doing charity work for her local Catholic church.

Clearly, Agnes is no longer on speaking terms with happiness. Her routine redefines monotony. This desultory situation is obvious from the first scene, where she is hosting a birthday party, serving drinks, washing glasses, speaking almost no words to the guests who ignore her while lavishing their attention on her husband Louie (David Denman).

The carefully modulated screenplay by Oren Moverman and Polly Mann is constructed to build up to the cake she baked for the occasion and the traditional song that accompanies it, but the shock comes when the name the guests all sing in the third stanza is not Louie, but Agnes!  Yes, it’s her own birthday party and she hardly seems to be anything more than a bystander.

The movie really begins later, when she opens one of her presents and finds a geographic puzzle with 1,000 pieces which she puts together hastily, with the ease of a contractor working with brick and mortar. Newly energized, she boards a commuter train from Bridgeport to Manhattan to buy another puzzle. Then she answers a flyer from a man seeking a partner in an international puzzle tournament and meets Robert (India’s Irrfan Khan, from Slumdog Millionaire), a divorced inventor who finds more than a business interest in his new associate.

Agnes meets Robert three times a week to practice, keeping her clandestine activities a secret from her family’s disapproval. In the film’s eventual trajectory, Robert opens a shy, demure woman’s eyes to a new level of self-esteem while Agnes is forced to re-examine the value of her under-appreciated marriage and family life.

It’s a film without requisite excitement (jigsaw puzzles don’t generate much in the way of pulsating cinema). And, with all due respect for the old-fashioned sweetness on view, I find the fact that years of solitary drudgery in anyone’s life can be reversed or a woman can reinvent herself through a passion for jigsaw puzzles a bit dubious. But only in essence.

The intelligent script provides rare insight into character development and the meticulously layered performance by Macdonald give the film a credence and balance that touches the heart. 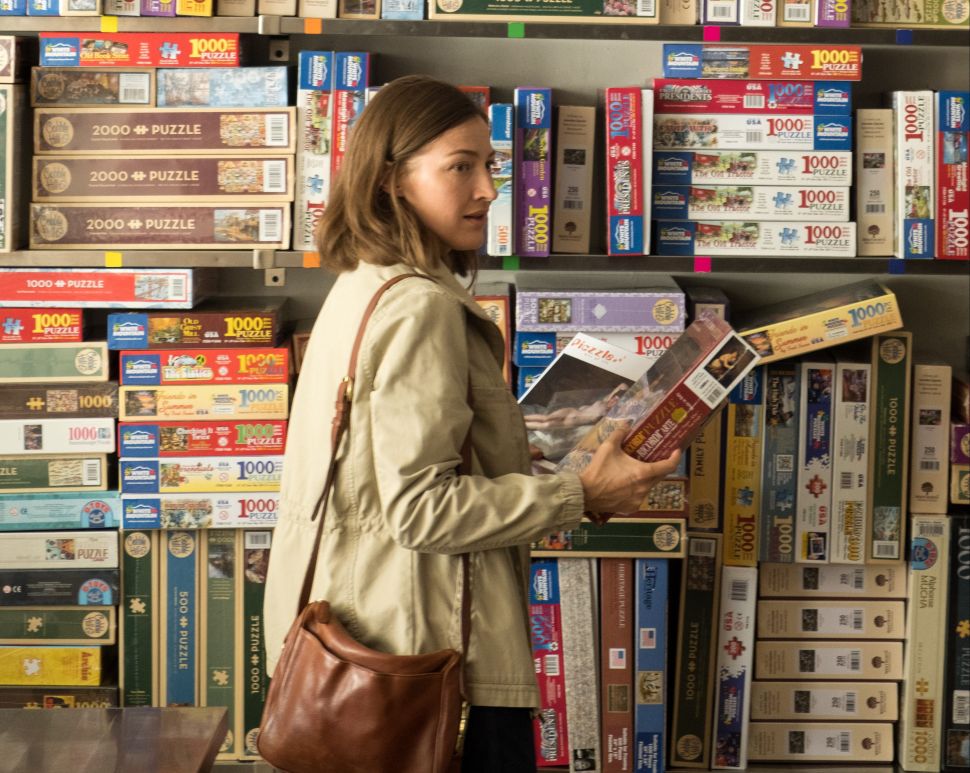