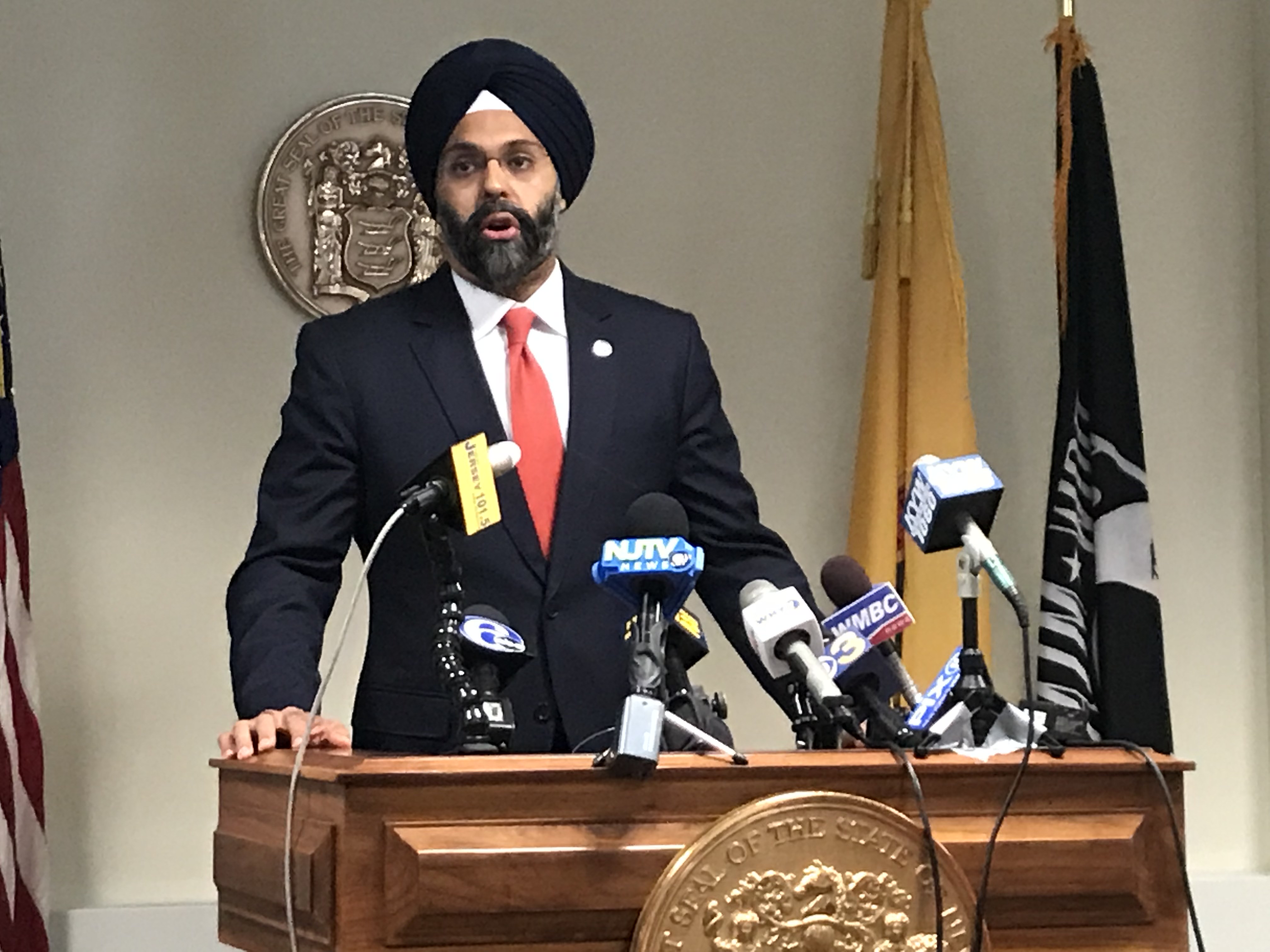 A pair of radio talk show hosts are off the air for 10 days after repeatedly referring to New Jersey Attorney General Gurbir Grewal as “turban man.”

NJ101.5 hosts Dennis Malloy and Judi Franco apologized for “insensitive comments” after being called out for remarks made earlier this week after Grewal said the state was placing prosecution of low-level marijuana-related offenses on hold until September.

During the broadcast, Malloy said he couldn’t remember Grewal’s name so, “I’m just going to say the guy with the turban.”

At that point, Franco sings “turban man,” in imitation of a Super Hero theme song.

“Listen, if that offends you, then don’t wear the turban, man. And I’ll remember your name,” Malloy said.

During the conversation, Malloy asks if his comment are “highly offensive.”

In an apology posted on the radio station website, the pair said: “We offer our sincerest apologies to Attorney General Gurbir Grewal as well as the Sikh and Asian communities for a series of insensitive comments we made on our show. For 21 years, the Dennis and Judi show has been unscripted and free form. We use humor and sarcasm to make a point and add color to the broadcast; in this instance, we were off the mark. It was a mistake we both deeply regret.”

New Jersey 101.5/WKXW-FM president Ron deCastro said the station took the pair’s comments “seriously and echo Dennis and Judi’s sincere apology to Attorney General Grewal and his family, as well as the Sikh and Asian communities.”

“Dennis and Judi are known for their plainspoken brand of humor, but in this case, the language used was clearly demeaning and inappropriate,” he said.

“This is not something where somebody sort of just tiptoed across a line. They crossed it by miles,” the governor said.

Megan Daly, spokesperson for UNITED SIKHS, told CNN: “Sikhs maintain our articles of faith, including unshorn hair and turbans, to represent equality and justice. However, these visible markers of religious identity also make us a target for bigotry by harassment.”

NJ 101.5 suspends hosts after they called NJ Attorney General Gurbir Grewal ‘turban man’
A pair of talk radio hosts who repeatedly referred to New Jersey’s Sikh attorney general, Gurbir Grewal, as “turban man” and “the guy with the turban” on Wednesday were suspended for 10 days and apologized for “a series of insensitive comments.”
The Record Read more

Stile:The ‘Turban Man’ smear is all too familiar in the Age of Trump
In the Age of Donald Trump, boorish, xenophobic and bigoted speech is making a comeback.
The Record Read more

Who are Dennis and Judi? ‘Turban man’ puts longtime NJ 101.5 hosts in the spotlight
They are, by their own admission on social media, a “sloppy, unfocused mess.”
The Record Read more

NJ Senate votes to strip Gov. Phil Murphy of key budget role, but effort likely to fail
A move to strip Gov. Phil Murphy of a key power over state budgets is likely to fail, but it still represents a victory for his intra-party rival Stephen Sweeney, who led the state Senate in a 28-3 vote Thursday to put a proposed constitutional amendment before voters this fall.
The Record Read more

Most Americans think marijuana is beneficial. But science says not so fast
As marijuana becomes more accepted across the country, a new study has found that Americans’ perception of marijuana outpaces the science on the subject.
NJ.com Read more

Governor Murphy on Progressives v. Machines, His Agenda Past and Future, Menendez, and Whitman’s Call for Trump to Resign
The front door to Tops Diner swung wide and in walked Governor Phil Murphy, beaming amid an almost instantaneous onslaught of ear bending and entreaties for his picture as he waded among the crowded lunch-hour booths.
InsiderNJ Read more

Woman in videotaped Wildwood beach arrest rejects plea offer
A Philadelphia woman whose violent arrest at a New Jersey beach over Memorial Day weekend was captured on video has rejected a plea deal and will seek entry into a pretrial program that could lead to the charge being dismissed.
Inquirer Read more

BPU Orders Utilities to do Better Job Keeping Lights on During Big Storms
The Murphy administration is ordering the state’s electric utilities to step up efforts to avert widespread power outages in the wake of a trio of nor’easters that left more than a million customers without service last March.
NJSpotlight Read more

Study: NJ top state for air quality, among worst for affordable housing
New Jersey ranks well in some social determinants and other health care factors but lags in other categories, according to the Health Opportunity and Equity Initiative.
NJBiz Read more

ICE serves 75 NJ businesses with audit notices over hiring practices
At least 75 New Jersey businesses have been served with audit notices by Immigration and Customs Enforcement because of suspicions that they hired employees who lack legal status and had false documentation.
The Record Read more

What Happened to Raising Minimum Wage to $15 Per Hour
The New Jersey Legislature is on its summer break but Gov. Phil Murphy wants to make sure lawmakers don’t forget about raising the minimum wage as quickly as possible.
NJ101.5 Read more

Charge of Racism Leveled at Assembly Hearing on Affordable Housing
Accusations of racism were thrown at municipal officials who oppose affordable housing at a state Assembly hearing yesterday that was called to air concerns about the system of setting housing obligations, which can sometimes require municipalities to allow for more than 1,000 units within their borders.
NJSpotlight Read more

ACLU-NJ sues 12 school districts, alleging discrimination against undocumented students
The ACLU of New Jersey filed lawsuits against a dozen school districts across the state on Thursday, alleging that their enrollment policies are illegal and discriminate against immigrants.
The Record Read more

Meet the bacteria that could become New Jersey’s official state microbe
Microbes have an image problem.
Invisible to the human eye, they are generally seen as germs responsible for disease and food poisoning.
The Record Read more

Dover mayor feuds with alderwoman, throws two out of public meeting
ame-calling, accusations and animosity have become commonplace with the town’s Board of Aldermen and mayor since June’s Democratic primary elections shook things up.
The Record Read more