Opera is notoriously an entertainment for white people; audiences from the Met to the smallest workshop company are among the least diverse for all the arts. But this summer’s New York-adjacent festivals compounded the problem by programming works centered around privileged whining.

The Caramoor Festival, for instance, presented Handel’s obscure pastoral rom-com Atalanta, in which a gaggle of pretty nobility swan about the hills and dales, pretending to be peasants and falling in and out of love. (Call it Sex and the Country.) After a couple of hours of tuneful trilling the title character suddenly has one of those “But why didn’t you tell me you’re a prince. Because I’m a princess, you know” moments, and everyone sings some more about how happy they are.

At the July 22 performance, conductor Nicholas McGegan confirmed his reputation as a Handel pro, keeping tempos and orchestral timbres solidly in the middle of the road. His singers I found rather on the anonymous side, with the exception of Sherezade Panthaki as Atalanta. The soprano’s voice was as lavish and colorful as her bouffant brocade frock and her coloratura flourishes sounded original and dashing.

The following Saturday, Caramoor’s former Director of Opera, Will Crutchfield, took his act on the Saw Mill River Parkway, opening up shop at new festival called Teatro Nuovo at SUNY Purchase. His first program examined the tragic side of Caucasians in crisis in the form of Rossini’s Tancredi.

In this opera seria the stakes are higher than in the comic Atalanta: a typical aria finds a Sicilian prince totally bummed that he has to execute his daughter, who sent a love letter to an unspecified recipient who just might be a Muslim warlord. (It’s not, of course: she was writing to her beloved Tancredi, who never received the message because he was using an assumed name because… well, reasons.)

Tancredi, which premiered in 1813 when Rossini was only 20 years old, was a runaway hit and Crutchfield’s meticulously prepared concert version succeeds in capturing the work’s bold and noble energy. Of particular interest was a “recreation” of an opera orchestra of the early 19th century, with period instruments and a physical layout conducive to a more collaborative performance style than we are used to.

There was no conductor as such; rather, first violinist Jakob Lehmann stood throughout the performance and indicated tempi with various gestures of his head, shoulders and bowing arm—quite a show in itself.

Among the singers, most adept at Rossinian bravura was tenor Santiago Ballerini as the above-mentioned tormented father Argirio. In the sort of part that Verdi would have assigned to a baritone (think Simon Boccanegra) Ballerini conjured a near-ideal balance of gravitas and fire.

As the (at great length) reunited lovers, Tamara Mumford (Tancredi) and Amanda Woodbury (Amenaide) sang a bit carefully for my taste. Mumford’s voice boasts a deliciously Stygian low extension that overshadows her rather plain middle register, and Woodbury’s elegant soprano—for all its virtuosity—sounded a little cool and prim for the extremely put-upon heroine.

More royalty populates the cast of Rubinstein’s Demon, performed July 29 at Bard’s SummerScape Opera, but at least these characters are dealing with a problem we can all relate to, sexual harassment by a supernatural monster. (Ladies, are you with me?) That’s the premise off this lurid 1875 piece, in which a Georgian princess is pressured to do the nasty by an unnamed Demon. (He’s a wily one: at one point he even says, “You’re the only girl I know who really understands me.”)

This opera’s lavish tunestack (each melody is lusher than the one before) more than makes up for its rudimentary plot. (In case you’re wondering, the princess finally gives in and kisses the Demon, then immediately dies and goes to heaven.) It’s easy to see why superstar singer like the late Dmitri Hvorostovsky have been attracted to such glamorous vocal lines.

A little more star quality might have elevated Bard’s presentation to greatness. As it was, soprano Olga Tolkmit as Princess Tamara sacrificed vulnerability for decibels, and Efim Zavalny’s lyric bass-baritone was attractive enough, but not the sort of thing you’d risk eternal damnation for.

Best among the voices was the refulgent tenor of Aleksander Nesterenko as Prince Sinodal, who, sadly, dies in the first act. His early exit from the opera was doubly tragic, since the announcement of his demise at the second act wedding party put the kibosh on a deliciously campy folkloric ballet.

Director Thaddeus Strassberger deserves credit for playing this Cecil B. DeMille sex-and-religion saga with a straight face, though his decision to interpret the action as a sort of hysterical hallucination on the part of Tamara left the long series of heavenly choruses in the finale sounding utterly cheesy and insincere. Conductor Leon Botstein’s scholarly leadership robbed much of the music of its exotic brilliance.

And while we’re on the subject of white people, I’d like to point out that across the casts of principals of these three full-length operas, exactly one person of color made an appearance: bass-baritone Davóne Tines, who sang a single aria in Atalanta. 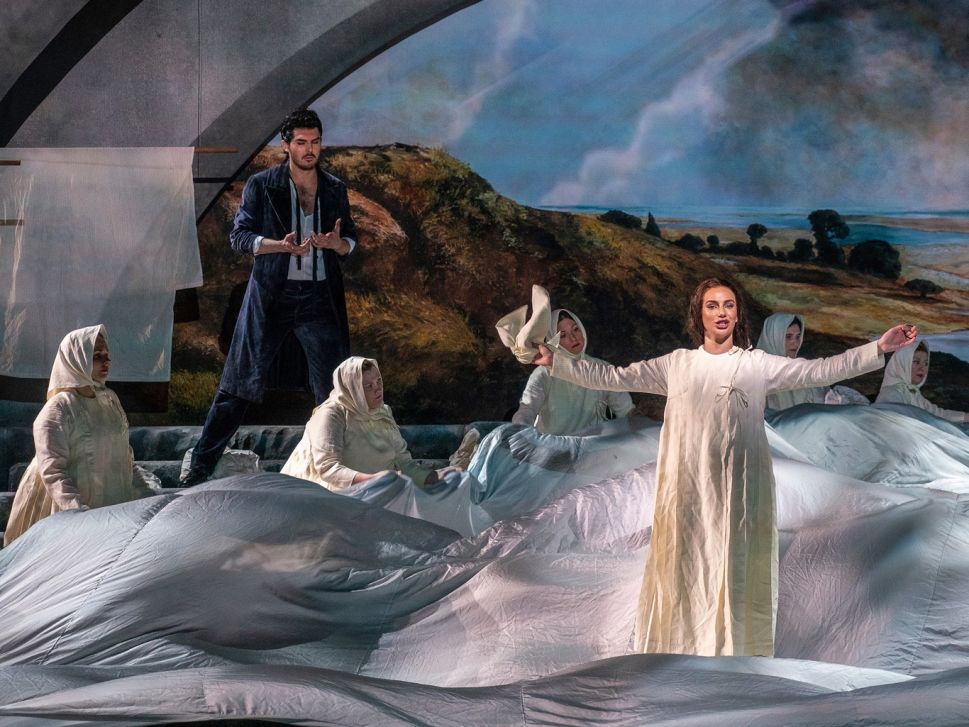