Yes, it’s true: the American student debt crisis is so bad that we now have to fight it with a game show.

Last night Paid Off premiered on TruTV, hosted by Orange is the New Black actor Michael Torpey. The premise of the show is simple—if you win, you get your loans paid off.

Almost 45 million Americans have student loans, and much ink has been spilled about how a game show isn’t the best way to tackle the problem. The show’s creators acknowledge as much themselves.

“If you’re just tuning in, yeah, this is real life in America,” Torpey says during the pilot. “Call your representatives right now and tell them you need a better solution than this game show.”

But if we do have to fight the student debt crisis with a TV show, is it too much to ask for a better one?

Paid Off‘s mission is noble, and the show does provide some interesting student loan statistics. For example, women generally have 14 percent higher debt than men and Seattle is alleviating the debt crisis with a $15 minimum wage.

The entire enterprise is so cheesy, however, that these pearls of wisdom are swallowed up by game show schmaltz.

Here are a few of the many ways Paid Off trivialized student debt in its first 30 minutes.

Each episode features three contestants. In the pilot, they are

The last player is the butt of quite a few of Torpey’s jokes.

When Jay introduces himself, the host asks if the major was “well-rounded” and offered “unique job opportunities.”

There’s another joke later in the show when Torpey reveals that the most common job among college students is waiting tables.

“You still have that now,” he tells Jay. Hardy har har.

These Categories Don’t Get a Passing Grade

“Finger the Masters” may sound like a double entendre, but it actually requires the contestants to identify classic works of art through finger painting copies.

Another group of questions centers around “Ology-ology.” It requires the players to identify different fields of study, but it also allows Torpey to make stupid jokes.

“Psychology is the study of people who say ‘psych,'” he says at one point. Guess he majored in comedy.

But the stupidest category by far is “Goodfellas or Thomas the Tank Engine.” Contestants have to decide whether the characters Torpey yells out were part of the classic gangster movie or a children’s TV show.

To make the game sillier and more difficult, however, there are added sound effects. As they answer, contestants are distracted by screaming and/or peeing effects.

Just the thing to take the piss out of your student loan struggles!

What Every College Classroom Needs—Insult Comedy

No, sadly this isn’t a joke.

During one round called “Sick Burns,” a comedian named Alan Jones comes out to roast the contestants and ask questions via insult.

“This game show look like a lame show,” he says upon his entrance. Comedy gold right here, folks.

The comic’s questions aren’t much better. They revolve around the solar system, which gives Jones the chance to call Venus a “stupid, dumbass planet.”

“If you sent me an email, you’d be the unread planet,” he says about Mars. Painful stuff.

When his segment is finally finished, Jones tells Torpey, “Your mama’s teeth [are] so yellow every time she smiles traffic slow down.”

Some categories don’t even rely on knowledge, but more on the contestant’s ability to yell.

One of the game’s bonuses is called “I Knew That.” If one player answers a question correctly, another contestant can yell those three magic words and get the same amount of money, no questions asked.

If that isn’t a participation trophy, what is?

Not Part of the Solution

Like every game show, Paid Off has winners and losers. And even the losers get a portion of their debt paid off, which is great.

But each elimination also features a twee segment where the loser is supposed to raise awareness of the debt crisis.

So when Nico loses, Torpey asks him to call Congress—and there’s literally a phone onstage where he can do just that.

But when Nico picks up the phone, all he says is “Hello Congress, your boy Nico here.”

It’s safe to assume no congressional page has ever gotten a greeting like that, especially since it’s not aimed at any particular congressman.

And when Jay goes home, Torpey gives him an oversize “Keep It Up” sticker like kids get in elementary school. The host asks Jay to have the audience sign it and then send it to Elizabeth Warren.

Woe to the Warren aide who has to open that package.

A Bonus Round That’s Just as Stupid

Madeleine ends up winning the game, and she gets half of her debt paid off. Good news, to be sure.

But then Torpey squanders all that goodwill by having an audience member named Thomas (who’s $36,000 in debt) play a game called “Punch the Wall.”

The crew wheels out a wall of nine prizes, and Thomas punches holes through them to get the treasure within. In the end he ends up earning $1,000 toward his debt, while also randomly winning a sandwich and a cantaloupe.

At the end of the show, Torpey trumpets the fact that four people had their student loan debt reduced throughout the show—and again, that’s terrific.

But if the Paid Off crew continues to prize stupid stunts over actual solutions, a lot more than four people are going to turn off their TVs. 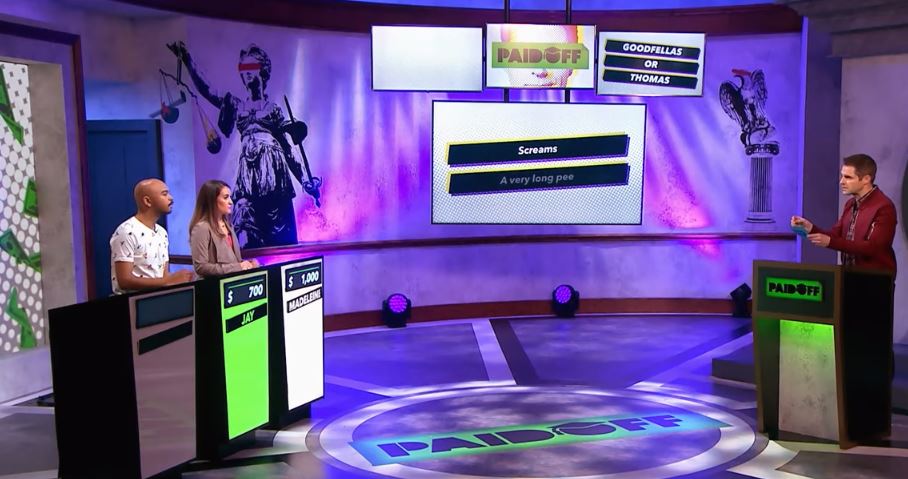