Yesterday, July 30, four members of protest performance group Pussy Riot were detained again, only moments after being released from prison after serving 15 days for rushing the World Cup soccer field. Today they were seen being escorted to a court for a hearing.

This instance of the punk group being jailed began on July 15. During the final World Cup soccer match between Croatia and France in Moscow, Russia four protestors identifying themselves with the collective briefly interrupted the game, dressed in old-fashioned police-officer costumes. The event was part of a piece titled, “Policeman Enters the Game,” a performance work meant to condemn Russia’s political and prison system, including the lack of political competition in the country.

Just a few minutes after the members were escorted off the field by security, Pussy Riot shared an explanation of the performance and a list of demands for the Russian government. It included stopping “illegal arrests on rallies,” setting “all political prisoners free,” and, perhaps most pertinent, not fabricating criminal accusations to keep people imprisoned with no reason.

These four Pussy Riot members, Veronika “Nika” Nikulshina, Olga Kuracheva, Olga Pakhtusova, and Petya Verzilov, were arrested and sentenced to 15 days of prison and a three-year ban from all sporting events on the grounds of “violating the rules of spectators at sporting events” and “wearing police uniforms illegally,” according to the BBC. The list of demands they shared then expanded to include release of the imprisoned Pussy Riot members, cancelling of article 282 of the Russian Criminal code (“extremism”), and giving “a federal TV-channel to an activist media outlet ‘Mediazona.’”

When the women had been imprisoned for over ten days, acclaimed performance artist Marina Abramovic took to the art collective’s Twitter account to release a video in solidarity with the members wearing one of their signature bright red balaclavas.

4 our members are still serving 2 weeks of arrest after the world cup action pic.twitter.com/15DiHYtXNf

Since their arrest, the punk-rock band and activist art collective has shared several new songs. The first, “Track About Good Cop,” references the statement the group released on Twitter about their World Cup performance. In the accompanying video, a mythical “heavenly cop,” who fights for the Russian people’s best interests, contrasts with an “earthly cop,” who represses and illegally jails them. The description of the video playfully credits Russia’s Ministry of Internal of Affairs for the styling.

The group then released “КОШМАРЫ/NIGHTMARES” and “PONG!,” two new songs also accompanied by videos attacking the Russian state and law enforcement. The former calls for the release of the film director and political prisoner Olog Sentsov, with lyrics describing the dire prison conditions in Russia.

The other represents Pussy Riot’s 2012 protest “Punk Prayer” as an arcade game.

“PONG!” arrived on July 24, just days after news broke that the European Court of Human Rights had condemned Russia over Pussy Riot’s 2012 trial in response to “Punk Prayer.” The court determined that in their prosecution of the three Pussy Riot members, Russia has violated five articles of the human rights convention, among them, humiliation during trial and limiting access to lawyers. The ECHR has ruled that the Russian government should pay the activist collective’s members just under  €50,000 euro ($58,000) as compensation.

The last song the group released is titled “Unicorn Fever,” and is accompanied by an open letter dedicated to the release of Anya Pavlikova, an 18-year-old Russian girl currently in prison after being arrested in connection with an FSB sting.

The song takes its title from the pictures of unicorns Anya reportedly had plastered all over her bedroom wall when the police came to her room to arrest her. “Anya Pavlikova is the youngest of them, she was 17-years-old when police came to her room covered with unicorn pictures…18-years-old is facing 10 years in jail for talking,” Pussy Riot’s Nadya Tolokonnikova wrote in the letter.

On July 30, following the 15 days of their prison sentence, all four members of Pussy Riot were detained again, stopped at the gates by Russian police as they were exiting the prison, a video shows. The members of the group now face new charges of “staging a public event without having prior permission,” the Moscow Times reports, an offense that carries a prison sentence of up to 10 days. Following their absurd and inhumane trial back in 2012, the collective’s continued arrest for a brief public stunt boils down to yet another unapologetic demonstration of force by the state. But that abuse of force is exactly what the collective has managed to put on show, and on the world stage.

Yesterday night, while the members involved were being held in the police station, Pussy Riot posted a Tweet about the girls still “laughing and singing songs about freedom.”

they're laughing and singing songs about freedom tho https://t.co/TQ35f1IXTy

This morning, the group was released again from prison only to be detained once more and brought to court for a hearing. Photographs show the group arriving at a courthouse in Moscow on July 31. With no further news about when they will be released from police custody, the activist collective will surely continue to use their own detainment to shed light on the Russian government’s biased imprisonment tactics. 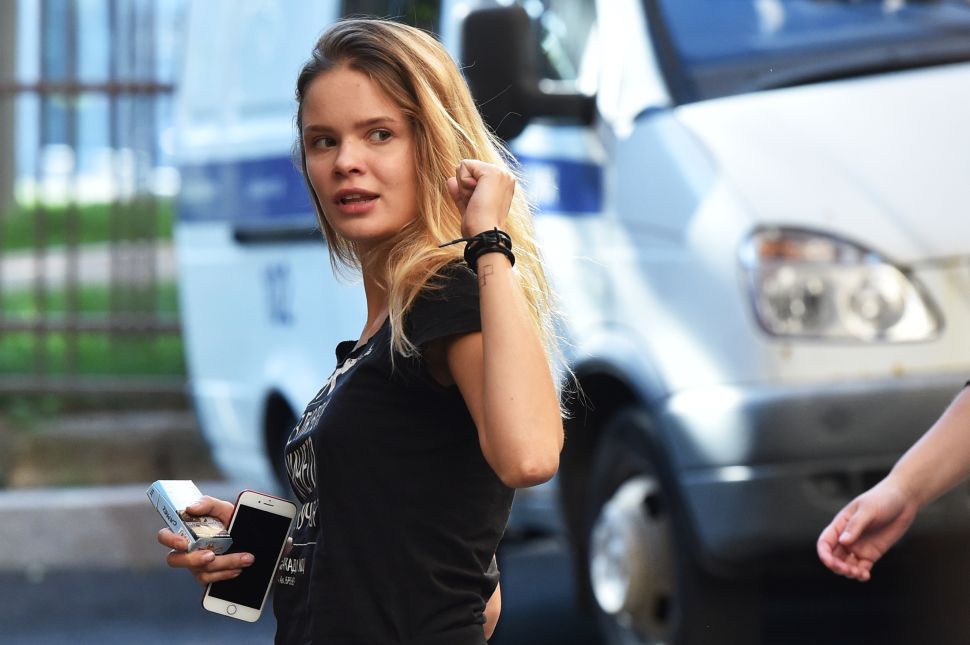